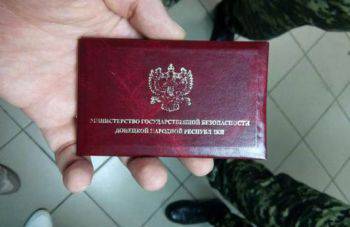 Probably, everything is simple: the power of the people should be able to protect this power. Undoubtedly. For, even in the distant past, one Ulyanov-Lenin said a clever thing: "Any revolution is only worth something if it can defend itself." And time has confirmed this more than once.


Can we call what is happening the last year and a half in the LDNR revolution? Full As if all the signs are there. And there are structures in both republics capable of defending this revolution.

However, lately, the honesty and sincerity of these structures causes doubt, if not concern, then unequivocally. So I want to ask the question: "Boys, you will be whose? Who leads you into battle?" And most importantly - with whom, that is, against whom?

In fact, the MGB of the DPR has become a punitive-roofing authority, in Donetsk everyone knows. Yes, to speak out loud about this is not accepted, because firstly, I want to live, and secondly, to live in freedom. How to DNR come with dissent? There are more than enough examples. Yes, dictatorship in the conditions of war with an aggressor is a necessary thing. And also historically justified.

Stop. Dictatorship. And then democracy and other attributes?

In general, it is necessary to decide to begin with, what do we have in the DPR - dictatorship or people's power? Yes, some examples of people's power seem to be present. Parliament (though “if necessary”, capable of spitting on the constitution), elected deputies by the people ... Tin, in one word.

Over the past year, the authorities of the DPR seemed not to notice anything special in terms of building a state. To say that nothing was done at all is, of course, impossible. The army, the Ministry of State Security, a bunch of ministries and departments were created, and some of them (for example, the Ministry of Health, culture and social protection, sports) even quite successfully started working. There are enough examples too.

However, the legal system, in addition to the prosecutor's office, is absent. Prosecutors have. And there are organs of investigation. That's all. There is no legal profession, no courts. The number of those under arrest, according to some information, has exceeded 5 thousands. And no movement.

So dictatorship? Backed by the work of the security forces, so that no one bawls? Sample beginning of the last century in the RSFSR? And what, it seems. And parallels can be found car. With the Cheka RSFSR. Why then the courts and the defense? Troika delivered a verdict, was taken to the courtyard, and the deed was done.

So far (I will underline this word) in LDNR have not reached it. And the arrested are just sitting. Are waiting. Either when all the same the courts will earn, or when they will lead to the courtyard. In the yard - cheaper. And, unequivocally, in the spirit of those who constitute "the shield and sword of the young republic".

The DPR MGB (and the LNR is no different in particular) pursues the policy of "who is not with us is the one in the basement." Organized and clear. Yes, some information reaches us, but, again, it concerns mainly famous people who cannot be hidden in a bag. But even with such people, the MGB copes quite well. Examples - yes, please.

Granovsky where? Was released and urgently left? So much so that during the day they cannot find anyone willing to talk with fire? Filippova? Kalusky? Well, okay, God ordered the last one to be planted.

Roman Manekin, former adviser to Zakharchenko? 2015 has been sitting since May for going against Kofman and Pushilin. For an attempt to organize the collection of signatures for the removal of Pushilin from office. Where Pushilin, we now know, but where Manekin - still the question.

Sergey Desyatnichenko. Military correspondent of the RPA. "Missing" in the center of Donetsk 7 September 2015 of the year. And then from the place where he distributed humanitarian aid, he “disappeared” and his Volkswagen TIGUAN with the number AN9810KX. And here we start from this place with details.

If you closely followed our reports from the DPR, at the beginning of this year, the abbreviation RPA (Russian Orthodox Army, part of the DPR Republican Guard) already flashed through the materials. Then it was connected with the abduction of journalist Dmitry Gau. We were one of those who made a fuss, as a result of which Dmitry “found”. Found, despite the fact that the version of the DRG SBU all very welcome in Donetsk.

In both cases, both from Hau and from Desyatnichenko, a certain Anatoly Topaz emerges. Person, very odious in Donetsk. It is on Topaz that both kidnappings are hanged. And not without reason. In the case of Desyatnichenko, it turned out that at the moment Sergey is in one of the cellars of Zakharchenko, where he was taken by his people for personal reasons. Namely, for a series of critical speeches about everything that happened in Donetsk on September 4.

According to the latest data, the following characters took part in the abduction: Pitbull, Murchik and Chuck, and led the operation ... Topaz. Whose, in fact, "guard" of the above organisms and are.

So, who is this Topaz, who is really scaring people?

Started his record Anatoly in the "Oplot". Head of Security. Post considerable, and the confidence of the commander of the "stronghold", respectively. When the commander went on increasing, Topaz did not forget either. And he gave him the post of head of the security service of the formed Republican Guard (we translate - the internal troops).

After the incident with Gau, in which the role of Topaz was proved, his conflict with Verin (“The Fifth”), acting president, arose. WG commander at the time, because Kondratov (Vanya "Russian") was treated after a severe injury. Result - Verin was arrested by the MGB and spent a month 4. Topaz got off with two weeks of house arrest.

Not only Russians don't abandon theirs, yes.

Next, Topaz was appointed head of the security of the Donetsk TV and Radio Center. And in this position did not stay long. Journalists are scandalous brethren and do not forgive scuffles. And cases of attempts to "build" and the use of physical force has accumulated so much that Topaz "left."

Where do you think the brave security specialist was after all the collisions?

That's right, in the MGB DPR.

Moreover, there are persistent rumors (no one will say directly, no fools are there) that Topaz enjoys the full confidence of the Spaniard. Also a personality remarkable in many ways.

Many sources on the other side say that the Spaniard is the one who leads the MNB of the DPR. Here, of course, the Donetsk people have to take their word for it, since it is just silly to demand the provision of any documents or other evidence.

In general, the MGB of the DPR is headed by Lukashevich, but, according to many reviews, it is headed in much the same way as Antyufeev did. "But it would be better to leave Antyufeev" - several people told us at once. It was under Lukashevich MGB, on the one hand, skyrocketed in terms of organization and personnel, on the other hand, constant conversations began on the topic of utter lawlessness on the part of the staff of this service.

And now - the Spaniard. There is information that the Spaniard is very similar in appearance to Yuri Mikhailovich Isaychenko, born 1959, a retired lieutenant colonel, a former colleague of Lukashevich and Kulyab.

“Kulyab” - he also very much resembles one person, about whom we will write a little later. Just his activity lies in a slightly different plane. But a person who is very similar to “Kulyab” is also listed as a colleague of Lukashevich. And also "in conjunction" for good reason.

But back to the Spanish. Once in the MGB, he, quite obviously, formed his team. Which is engaged in exactly what eliminates unwanted. By any means. Topaz turned out to be quite on the topic, for the abduction is his strong point. As well as his team members were useful.

Information that the whole brigade successfully fit into the so-called TSS (center of special operations), of course, would require verification, but ... Then he and TSS, so that no one about him really knew anything. True, sometimes the information slips. For example, the arrest of Purgin was personally led by Lenin, the head of this TsSO. These are the "special operations" carried out by this center ... Where there is a DRG of the Ukrainian Armed Forces to drive, there are more important tasks. Especially since for the most part the references to the work of the VLT of the Ukrainian Armed Forces do not stand up to criticism as the work of the Shadows. All that unites the "Shadows" and the DRG of the Armed Forces of Ukraine is a myth that has no reality to reality like Bednova and the Brain relation.

Just in the DNI work thinner. Although there are punctures too. Like, for example, in the photo from the rally in Donetsk, which 12 dispersed in September, the Volkswagen Transporter, in which several brave young men communicated with correspondents without presentation of any documents, hit the lens. Allegedly on behalf of the MGB. And the actual members of the MGB had nothing against it.

Remarkably, this Volkswagen and its owner, the entrepreneur Shevchenko, have been on the wanted list for more than two months. One - as missing, the second - as stolen. And now the car was in the hands of what seemed to be “titushki”, but working with the approval of the MGB. Original layout.

If we analyze in general the statements of the Pitmen against the MGB, the picture is sad. There are more than enough whispered conversations about spinning, landing and lawlessness. And the structure seems to be doing what? Obviously not abductions of objectionable. We are mostly mostly adults and we understand that the emergence of the DRG of the Armed Forces of Ukraine, kidnapping people in the center of Donetsk, is as likely as the DRG of the DPR corps in Kiev.

This we have not yet addressed the question of a fair number of our fellow citizens who are in the MGB under various pretexts. Not as employees, I see. Preliminary data from various sources are so overwhelming that they require both clarification and evidence. But we will definitely return to this topic as soon as we have a complete picture of what is happening.

So the question arises: "Boys, whose will you be?" Who leads the lads into battle is more or less clear. The second question is for what purposes.

We are in Yandex Zen
Results of the week. “As Comrade Lenin commanded - to work, work and work - and then there will be many, many money!”
New Russia is preparing to celebrate the Day of Liberation of Donbass
73 comments
Information
Dear reader, to leave comments on the publication, you must to register.