How are things with the "egg capsule"?

21 September 2015
56
In the economic segment of the foreign press, materials began to appear much less frequently in which the authors reasoned over the period of time “the Russian economy would collapse after the exhaustion of reserve funds”. Even at the beginning of this year, reflections often boiled down to the fact that, it remains to wait quite a bit until Russia squander both the Reserve Fund (RZF) and the National Wealth Fund (NWF), proest and drink away the gold reserve. They say that the sanctions and the fall in oil prices will do everything in order for the "bloody regime to fall." Now, however, such expectations are either not spoken at all, or are expressed with greater caution. What are the main reasons for such restraint? Own problems? Not only.


To understand this, you need to refer to the information of the Ministry of Finance of Russia about the mentioned funds and the volumes of their contents, as well as compare the dynamics of these volumes with what was during the previous global economic crisis in 2008-2010.

On 1 September 2015, the volume of funds in the Reserve Fund was almost 4,7 trillion. rubles (about 70,7 billion dollars), and this is 6,4% of Russia's GDP. If we continue to consider the funds of the fund in dollar terms, then $ 70,7 billion is the anti-record from January 1 of 2013. The average fall in the savings of the Reserve Fund over the period, based on the same dollar figures, was 16,8%. But there are some nuances that need special attention. In fact, the volume of savings in the RZF has been falling not since January 2013, but since October last year, when this level reached 91 billion dollars. The percentages of falling are even higher, and therefore, it would seem, it is necessary to beat with a sledgehammer on a hanging rail and shout in a foul language that “there are not enough dollars in the fund”. But is it necessary ... 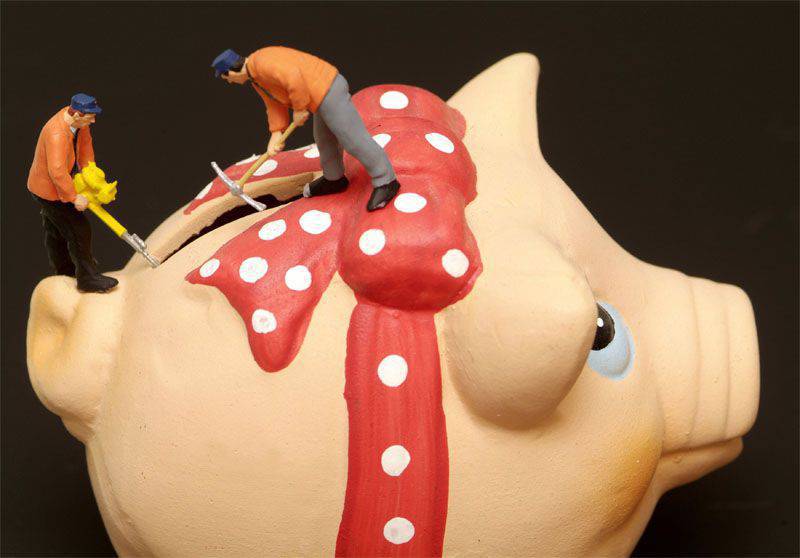 The fact is that the Reserve Fund is stored in dollars, euros and pounds sterling (this is a separate topic for discussion, and such a topic is discussed quite often with different arguments for and against), but RsF funds are spent Of course, trust the reports of the Ministry of Finance, mainly on domestic projects. That is, they are spent not in dollars, but already in rubles, and it will be somewhat unreasonable not to mention the dynamics of the fund's savings already in ruble terms. Due to the well-known dynamics of the ruble exchange rate, since January 2013 has grown by more than 2 trillion. rubles. Doubtful growth, which took place mainly due to the growth of the dollar? .. Well, why is "doubtful"? The ruble savings growth virtually painlessly allows you to manage the budget deficit, despite the fact that the burden on the budget due to a significant drop in oil prices and other economic difficulties for the Russian economy is serious. In a table published September 1 on Ministry of Finance websiteIt is indicated that the Reserve Fund has recently been used to finance the budget deficit.

By the way, over the past period 2015, the Central Bank replenished the reserve in gold by about 112 tons. This is 44% (!) Higher than the same period last year. The cumulative gold reserves in Russia's international reserves increased by 6%, reaching 47,7 billion dollars.

On 1 September 2015, the volume of funds in the National Wealth Fund amounted to $ 73,76 billion or 4,9 trillion. rubles (6,7% of GDP). In dollar terms, this is an anti-record figure since 2008. But if in rubles, then this is one of the best indicators for the whole history existence of the National Welfare Fund. More funds in rubles in the fund’s accounts were in February 2015, which is also explained by the ruble exchange rate against the dollar. And here, it would seem, everything is far from positive. But is it really so far? After all, the funds of the National Wealth Fund have recently been actively used to support companies strategically important for Russia and to increase the efficiency of the largest Russian banks in the context of Western sanctions against them.
In other words, if the ruble masses did not allow to allocate sufficient funds for large banks of the country, then banks simply could not lend to individuals and legal entities, and the Central Bank would hardly have had the opportunity to return the key rate to a level that is relatively digestible for doing business equal to a tall bar, but no longer 17 with the odd percent). Funds from the National Wealth Fund went to VTB, Atomenergo, Russian Railways and other banks and companies. But, unfortunately, one cannot say that all companies without exception that received funds from the National Wealth Fund used these funds efficiently. Care Vladimir Yakunin - an indicator?

And now about comparing the rate of fall of the dollar mass of the Reserve Fund with the period of the previous crisis. From February 2008 to February 2011, these savings have decreased 5 times! From $ 125 (2008) in the Reserve Fund remains 25 (2011). The fall in the volumes of “dollar” RZF funds for 20 months (from 2013 year) was, as already noted, 16,8%. There is no need to resort to elements of higher mathematics in order to understand that the back-up dice “are firing” is not at all as active as it was 7-8 years ago.

And why, in fact, “burn”? This is not the term that should be used today. It is possible to criticize the so-called economic segment of the Russian authorities for a whole lot of reasons, but not in the case of spending money "pot". These funds do not burn exclusively on maintaining the ruble rate at the pre-crisis level, as they tried to do in 2008-2009, these funds, at least officially, spend on other needs. Of course, I would like to see more intensive investments of state savings in the real sector of the economy, in the growth of domestic production capacity. But after all, with the great temptation to take and spend all the reserve accumulations in the current situation, there is a great risk of satisfying the very aspirations of the “friends” who so much want to reset the Russian reserves in order to take Russia, which is called, barehanded, even if the country has a nuclear shield. and powerful army.

So after all, it was already - they really took us with bare hands. Or rather, they themselves presented themselves to the “friends” also in the gift wrapping. At the same time, many fellow citizens also rejoiced at the exchange of a powerful state with colossal wealth and potentials for “freedom”, preached by all sorts of “American voices”. There are such fellow citizens who are ready once again to be happy for a similar exchange, and today ...

Then — in, God forgive me, the post-perestroika years, the funds were no longer spent either on investments in infrastructure projects, or on maintaining the exchange rate, or on stabilizing deafening inflationary dynamics. It was simply announced to everyone that the country didn’t have the means, as the country was “robbed by the damned commies” ... And the majority believed it ...

I would like to think that the lessons of 90-x (including 1998-th) along with the lessons of 2008-2010 are still learned, and the reserve funds will not be either “Kudrinskaya” “sacred cow” or an object of initiatives in the style of “to spend everything to at least a week live like people, ”and will turn into a full-fledged element of Russian security and sovereignty with a planned investment in both the banking and the real sectors of the economy. In general, I would like to hope that there will be no fanaticism in both directions, and then it will be a truly invaluable experience.