18 September 2015
38
While President of Ukraine Poroshenko and Prime Minister Yatsenyuk continue to declare that, with the help of international courts, they will beat out "hundreds of billions of dollars for occupation and aggression" from Russia, other representatives of the Ukrainian authorities state that instead of preparing for winter, "someone" is engaged in demagogy. Thus, the Deputy Prime Minister of Ukraine, Valery Voshchevsky, during a speech before the deputies of the Verkhovna Rada of Ukraine, said that a month before the heating season, Ukraine’s energy sector is “in a pre-infarction state. At the same time, Voshchevsky notes that there is no effective interaction between individual departments, and government decisions (even if such decisions are made) are frankly ignored by “on the ground” and “business representatives”.


From Voshchevsky’s statement about the controllability (or rather, lack of control) of the Ukrainian economy (energy in particular), when there are, to put it mildly, differences of opinion between the president and the prime minister:

In the locomotive, which is called the government, two machinists - one on Bankova street, the other - on Grushevsky street. And each of them leads. And the locomotive is not going anywhere, it is worth it.

It is noteworthy that literally the next day after Valery Voshchevsky’s statement, the Ministry of Energy and Coal Industry of Ukraine decided to publish the material, which was entitled as “6 myths of winter preparations”. The material is devoted to this: if there are those who are guilty of the fact that the energy sector of Ukraine covers ... with a copper basin, then this is not at all the Ministry of Energy and not the government as a whole. Such an Internet excuse to ordinary citizens in the style: "We are not like that - life is like that." 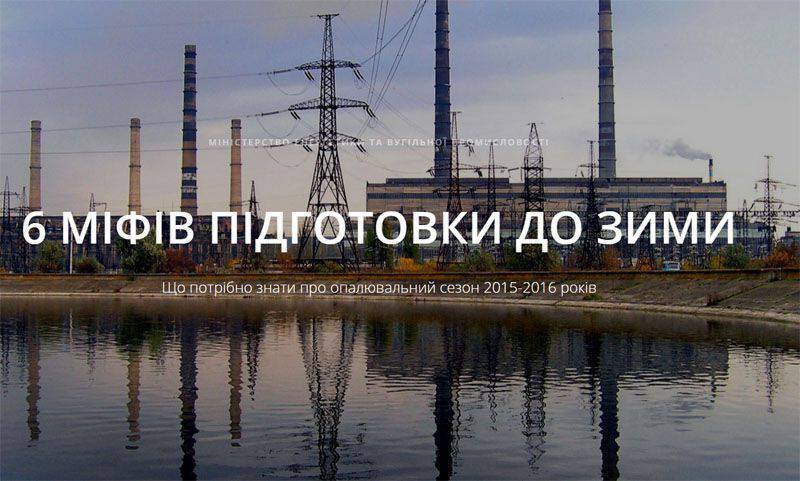 The “myths” that the Ministry of Energy and Iron of Ukraine is trying to tell about are worthy of special attention, and therefore more about them are more detailed.

“The Myth of 1” - “The State is responsible for everything.”

Representatives of the ministry are trying to prove with enviable obstinacy that private sector representatives who “slow down” preparations for the winter should also be considered guilty.

From material with the official site Ministries of Energy and Coal Industry "Square":

In fact, the supply of electricity, gas and heat in the hands of individual enterprises, some of which are state-owned, some are private. The industry has formed monopolies that are extremely inefficient: the equipment is outdated, there are no investments, so the huge energy losses are the biggest in Europe.

In general, the emphasis on the fact that everything needs to be privatized according to a new scheme, and then the Ukrainian people will be warm, light, and all this will cost a mere penny ...

Here, the ministry is trying to state that reducing gas consumption by more than 5,5 billion cubic meters of gas in 2015 a year (20,2%) is a highly thought-out Kiev decision that aims to “deprive Russian oligarchs of the opportunity to earn money”. That is, “the possibilities of earning Russian oligarchs were deprived” in order to let their oligarchs earn money on the “reverse”. Import Substitution in Ukrainian ...

From the material of the Ministry of Energy and coal of Ukraine:
In fact, the government is trying to get off the gas needle of the Russian Federation. For years, gas from the Russian Federation has been a way to get rich for oligarchs and politicians, and no one has ever thought about an alternative. Still. Already last year, Ukraine has diversified gas supplies, and has the opportunity to buy it from EU partners. Thanks to this, we can argue on an equal footing with Gazprom, which is again trying to supply gas at unfavorable conditions to Ukraine.

"Equal to argue" with "Gazprom"? A strong statement ... However, further it turns out that the dispute is hard, and Demchishin "explains" why:

Today, most of the required gas is pumped into storage. Negotiations are underway for the purchase of the missing gas. To argue with Russia would be easier if own consumers paid for gas. The level of payments for gas in Ukraine is still very low, and the budget is no longer able to subsidize purchases. That is why debts continue to increase, and the government needs foreign loans to buy gas.

From this statement, it is immediately clear “who is to blame” - after Russia ... Of course, the Ukrainian people, because, you know, it does not pay for gas, which Ukraine “doesn’t really need” ... And the government is literally forced to wait because of this foreign loans in order to “on equal terms” argue with Gazprom.

3 Myth "We do not have enough power"

Minenergougol and its head Demchishin assure citizens that there is enough power, but it turns out that the managers of these capacities are useless. They strive to raise tariffs, but the government stands behind consumers.

From the material:
The electricity tariff forms an independent regulator based on the cost price. The private owner constantly demands to increase the tariff, the regulator refuses, because he is not ready to shift the problems of the private owner to the consumers ’pocket. Enough power, not enough effective use.

Yatsenyuk with Poroshenko and here are beyond suspicion ... These are all the “proprietors” - the owners who prevent the government from standing by the mountain for the people who are not able to pay bills.

In general, all Ukrainian owners are in garbage cans, and they will be replaced by another batch of effective Americans, Georgians and Balts ...

4 Myth "The use of imported coal instead of his own."

Here Demchyshyn & Co. report why the government decided to stop subsidizing the coal industry, which has already caused a flurry of discontent on the part of the miners. It turns out that the government did it for the sake of "preserving jobs" ... Where is the logic? And it is not. The fact is that subsidies to the state coal industry have been stopped, and instead, “the question of finding investment in mining is being considered to prove the profitability of the mines”. And if they then ask, where is the investment, then the freaking government will say: they didn’t find it ... And that means that the mines are unprofitable ...

Indeed, the myth, as the "terrorists" who mine coal, this is myth creation ...

How does the purchase of coal in the DPR and the LPR (which in the DPR, by the way, have not been conducted recently, since Alexander Zakharchenko forbade the shipment of coal to Kiev) is the Ukrainian Energy Ministry trying to explain? That's how:
Coal from the ATO zone is not a purchase from terrorists, it is the support of miners who have cards registered in Ukrainian banks, working in the legislative field of Ukraine, paying taxes. Enterprises have a job and a chance to save power, people have work and support Ukraine (did they say this to Demchishin themselves? - author's note).

Next - apogee:
But since terrorists and the Russian Federation can stop deliveries, the government decided to start deliveries from South Africa in order to have a backup plan.

And why in this case do not use the argument, as is the case with gas: they say, we are buying from South Africa, because we don’t want to “enrich the Russian oligarchs” ... Or do it stop again with the citizenship of oligarchs? ..

These are government officials who came to power in the wake of a bloody coup, of course, should try to pass off as a myth - by definition.

From the "definition":
In fact, in the past, under the guise of stability, everyone who had political influence squeezed out of the industry, which provides 30% of the country's GDP. The current situation is the result of the "stability" of previous years.

That is, the previous authorities are to blame ... Well, yes, of course without them. Everything is simple here: Russia was the culprit - Ukrainian consumers were, “terrorists” were mentioned, but they forgot about Yanukovich’s “dictatorship” ... disorder ...

Modernization, the creation of competitive markets following the example of the EU, de-oligarchization — all this is necessary so that the heating season in Ukraine will never again be prepared in “manual mode” with the involvement of top state leaders.

The result is simple: everyone is to blame for the collapse of the Ukrainian energy industry, except for those who volunteered to answer for the energy sector, calling themselves the new Ukrainian government.

In all likelihood, such “revelations of myths” will soon begin to be published by other ministries and departments of the government “Square”, in order to at least delusional arguments to try to justify their own inconsistency.

Ctrl Enter
Noticed oshЫbku Highlight text and press. Ctrl + Enter
We are
Situational analysis of the death of the MH17 flight (Malaysian Boeing 777), made on the basis of engineering analysis from 15.08.2014Results of the week. “While the enemy draws attack maps, we change landscapes, and manually”
38 comments
Information
Dear reader, to leave comments on the publication, you must to register.