What our children teach, or the "Stalinist Trial"

15 September 2015
218
Educational institutions of the Russian Federation celebrated the onset of the new school year in different ways. In some, they switched to updated educational programs, in others they solemnly opened new educational buildings and received the necessary equipment and training materials for the full educational process, and in the third they looked for alternative reasons for celebration. Moreover, it happened that the alternative was clearly off scale ... 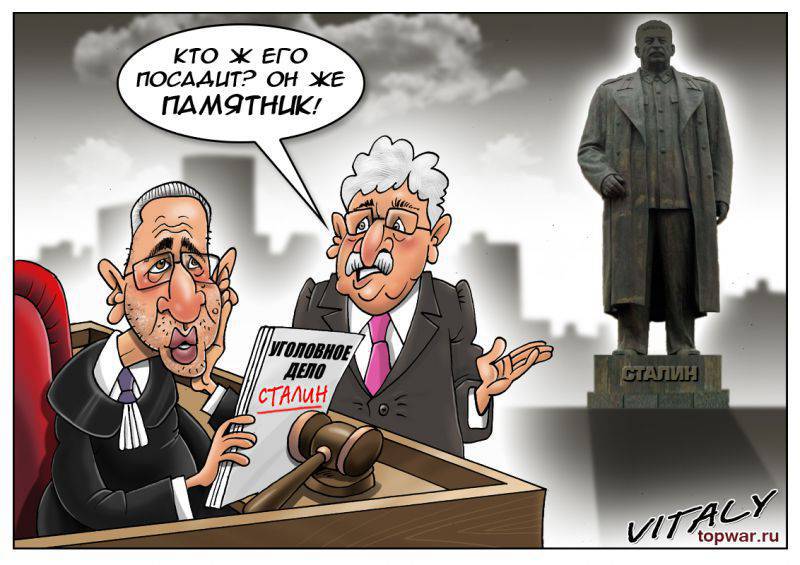 In the newspaper "Tomorrow"The editor-in-chief of which is Alexander Prokhanov, a writer and public figure, published material from Tatiana Voevodina last weekend, which reported that on September 3 a very specific event was held at Moscow International University (MUM). This event, dedicated to the beginning of the school year at the university, was called the meeting of the initiative group for the "Public trial of Stalinism and the crimes of the power of the Soviet period." Nothing more ...

The meeting “MUM members” was conducted with such enthusiasm that in the framework of the “trial” it was decided to create as many as several working groups, each of which had to focus on certain facts of “crimes of the most bloodthirsty dictators”. One group presented to the “court” materials on the legal examination of the “criminal” orders (decrees) of the Stalin period, another was supposed to be the prosecutor for the Stalinist repressions, the third was on the same accusatory line against Stalin for “crimes against the economy, science and culture”, and the fourth was to systematize all the material in order to prepare a course of lectures for students (and even schoolchildren), as well as a selection of articles and notes about the “bloody Stalinist gebni” for the media and the Internet. t-resources.

All the familiar faces took Stalin to judge at MUM, they are also the leading “experts on the bloody gebne”: Nikolai Svanidze (I think, he doesn’t need a special presentation), Yuri Pivovarov (head of the Institute of Scientific Information on Social Sciences, during which a large-scale fire lost the scientific and literary heritage stored in the library of INION, involved in the case of negligence) Leonid Gozman (President of the Union of Right Forces, not long ago, who identified the activities of SMERSH with the activities of the Nazi SS units, he (Gozman) ex-representative of the Rosnano elite), Lev Ponomarev (executive director of the movement “For Human Rights”, author of the idea of ​​creating the Congress of the Russian intelligentsia “condemning the annexation of the Crimea”, Commander of the Cross of Commander “For Services to the Republic of Poland”, awarded on the basis of a decree of Lech Kaczynski in 2010 year), Igor Chubais (the brother of the very same ... he expressed his admiration for the Ukrainian Maidan and declared the illegitimacy of the Russian authorities), etc.

This, by the way, is the statement of I. Chubais about "illegitimacy":


So, these gentlemen gathered at the university to once again indulge in ecstasy from the fact that they can afford not only to "judge" Stalinism, but also to create a course of lectures and other "scientific materials" on the basis of their gatherings, which later again flow into Russian schools and universities.

And what kind of a MUM is this, in which a wonderful in all respects Kompashka is going to, well, not able to calm down in any way, without building another “epic” about how Stalin covered everything with “corpses”, about “one rifle for three” , that “the Allies saved the USSR perishing”, etc, etc, etc ... And MUM is a very interesting institution of higher education that will celebrate its 25 anniversary next year. What is it interesting? - Well, at least by the fact that the decision to open it was made in 1991 by the presidents of the USSR and the USA, Mikhail Gorbachev and George Bush Sr.. You must admit that not every university in Russia can boast that the decision on its creation was made by the head of state after a conversation with the head of another state ... The first president of MUM was Gavriil Popov (the first mayor of Moscow), who formulated, as much as possible, the “elitism principle” of the university , today having the status of autonomous.

К elite teachers elite universities include (relate), for example, such people as Yuri Luzhkov, who was once dismissed from the post of mayor of Moscow with the wording “due to loss of confidence” (apparently, the elite level of Yuri Mikhailovich still made itself felt ...); Gennady Burbulis, whose elitism manifested itself almost immediately after a decision was made to create a Soviet (Russian) -American university, namely in December 1991, during the preparation of the so-called Belovezhsk agreements on the collapse of the USSR, Vasily Popov, whose elitism, judging by everything, inherited from his father (President of the MUM and the ex-mayor of Moscow) Gavriil Popov.

And now elite I decided once again to declare myself, and, judging by the materials of Tatiana Voevodina, I chose for this a familiar scheme - a liberal collection, God forgive me, intelligentsia, in which all conscious life is devoted to one thing - how to smear that liberal with crap again period storieswhen the Soviet Union broke the teeth of the then "partners." To smear - once, not to give about yourself - to forget two. Forget really did not give ...

Discussion of the “trial of Stalin” by those who experience a permanent orgasm from this should be left to psychiatric specialists. After all, the “trial” of a person in the history of the country is nothing else but a gathering of sociopolitical noisy liliputians, trying once again to shout enough, satisfying each other, does not resemble ... And again, the classic question is: "Who are the judges?"

It is much more important that in the near future on the shelves of school and university libraries can appear again "works", adopted to call a derivative of Soros's literature. - Literature that the Soviet Union is an “empire of evil”, that between Stalin and Hitler one should certainly put an equal sign, that everyone repressed in 30-40-e has been “somehow wrong” rehabilitated, that Russians need to repent before "Partners" for the fact that the Russians have not yet trample down the portraits of Stalin along with the portraits of the warlords of the era of the Great Patriotic War (after all, the war was won, of course, only by General Frost and Marshal Lend-Lease ...).

It would seem that for heresy? .. These "judicial" lectures in any universities will not fall, because our Ministry of Education and Science will not miss the new pseudo-historic pearls in educational institutions. Well, yes, yes ... And how do you like that (information from the MUM site):

The International University in Moscow has been recognized as an effective university for the fourth year in a row. 15 June 2015 The Ministry of Education and Science of the Russian Federation announced the completion of data analysis as part of the monitoring of the quality of educational activities of universities. The international university in Moscow exceeded the threshold values ​​for monitoring indicators, as well as in the three previous monitors of the Ministry of Education and Science (May 2014, November 2013, and December 2012) and entered 2015 in the number of effective universities in the Russian Federation.

"Courts" of domestic historical personalities, the lectures of Mr Bykov and Makarevich, "deifying" everything that could lead to the rejection of Crimea from Russia, the organization of meetings of the American Ambassador J. Tefft with university students, lectures on the "achievements" of Gorbachev's restructuring, - by In all likelihood, this, in the opinion of the Ministry of Education and Science, is the effectiveness of educational activities in the country. But dozens of the oldest, for example, pedagogical universities in Russia are closed, being recognized by the same Ministry of Education as ineffective ... Or, closed educational institutions (universities) of the Russian Federation also had to invite Svanidze, Makarevich and Tefft for efficiency and elitism, not forgetting to administer justice more often. Stalinism and bloody gebney? ..

Ctrl Enter
Noticed oshЫbku Highlight text and press. Ctrl + Enter
We are
How we looked for lost polymersSituational analysis of the death of the MH17 flight (Malaysian Boeing 777), made on the basis of engineering analysis from 15.08.2014
218 comments
Information
Dear reader, to leave comments on the publication, you must to register.