The second Sunday of September - Day of the tanker in Russia

13 September 2015
127
On the second September Sunday in Russia, the Day of the Tankman is traditionally celebrated - a holiday that brings together an impressively large brotherhood of tankers and the creators of these formidable fighting vehicles. In 2015, the date of the celebration falls on September 13 and actually opens up a new page in stories domestic tank technology, since it was on the Tanker’s Day that Uralvagonzavod, with the help of journalists from the Zvezda television channel, demonstrated a film about the latest Russian T-14 tank on the Armata armored platform. This is a new generation tank, which can be considered a wonderful gift to Russian tankers from tank builders of the Russian Federation. 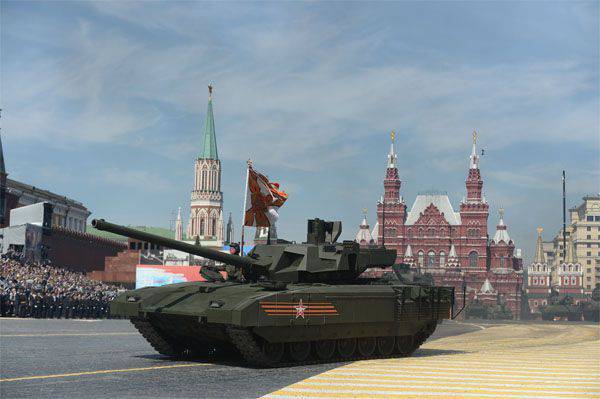 The official date for the appearance of the holiday of tankers is 1 July 1946, when the USSR issued a decree of the Presidium of the Supreme Soviet, emphasizing the great services of armored and mechanized troops in defeating Hitler's Germany and its allies. Less than two months after the decree was issued, namely 8 in September of the same 1946, the USSR Supreme Soviet orders the parade march of the Kantemirovskaya division in Moscow, which in fact became the first in the history of the country celebration of the Tankman’s Day. 69 years have passed since then, but the traditions of the glorious holiday did not dissolve, despite the fact that the state itself had ceased to exist, in which the Day of the Tankman was born. Glorious traditions are preserved, and these are not empty words.

The history of tanks in Russia begins with the appearance of British armored giants during the First World War. It is precisely with this event that both the generally accepted name of the vehicle, the tank, and the original Russian-language naming of English armored vehicles in the Russian Empire are connected. Historians tend to believe that the term “tank” is a kind of invention of British intelligence, spreading among the enemy a rumor that Russia allegedly ordered tanks for fuel and water from London. Under the guise of fuel tanks (eng. - tank) combat vehicles began to appear in Russia, and the word “tank” in the Russian army at first seemed (and there is nothing surprising) alien, and the military (and not only the military) used instead the term Russian version - "tub". In the 1918 year, in the Universal Russian calendar of the publishing house D.Sytin, a drawing called “Lohan” came out - an armored monster climbs into the trenches during the offensive ”. 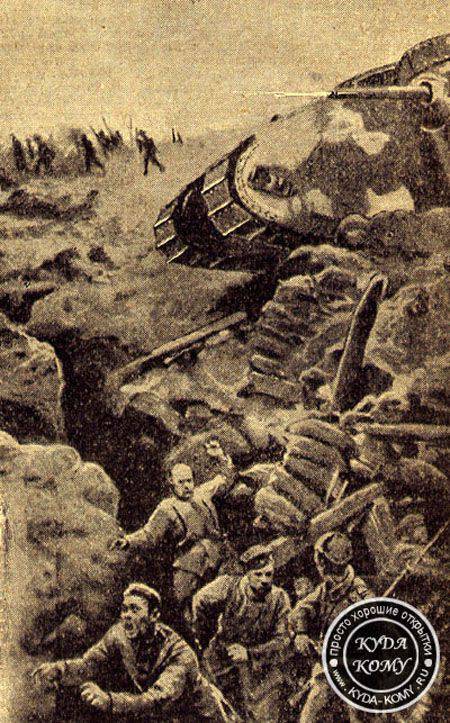 At the height of the civil war in Russia, the Military Industry Council makes a decision to set up production of its own tanks in the country. For the sample, it was decided not to take the English “Marks”, but the “Renault FT-17”, developed in France in the 1917 year. Tank "Renault FT-17" by that time had become the first production light tank in the world. In addition, it was the first tank, the tower of which could rotate 360 degrees. The Renault FT-17 was in the hands of the Red Army as a trophy in March 1919. The troops of the Southern Front captured several such tanks at once during the battles for Odessa, and one of them was sent to Moscow as a gift to Vladimir Lenin by the soldiers of the 2 of the Soviet Ukrainian Army. After a while Lenin replied by telegram as follows:

I bring my deepest gratitude and appreciation to the comrades of the Second Ukrainian Soviet Army regarding the tank sent as a gift.

After some time, "Renault FT-17" was sent to the Sormovsky plant in Nizhny Novgorod, where they conducted its full analysis with measuring actions of literally every detail and element of the tank. Armor and engines for the first tank assembled in Russia were supplied from the Izhora Plant and AMO (later - ZIL). At the Sormov plant they manufactured the tank chassis and made the final assembly of the armored vehicle.

It is believed that the first tank assembled in Soviet Russia was given the title Comrade Freedom Fighter. Lenin "and was delivered to the troops 15 December 1921 of the year. Total Red Army received 15 similar combat vehicles. Distinctive features of the tanks of Soviet Russia from the French armored vehicles can be considered the presence of the engine of its own production and riveted turret.

Soviet tank building truly manifested itself during the Great Patriotic War. It was at that time (for obvious reasons) that the most important peak of domestic tank production fell, among which one of the main symbols of the Great Victory stands out - the T-34 tank, which was the main tank of the Red Army up to the 1944 year. The T-34 tank is also the owner of an important world record - it was this armored vehicle that became the most massive medium tank of the Second World War. In gratitude, both to the creators of the tank and to the heroic tankmen, literally throughout the country numerous monuments of T-34 were erected. In Moscow and Voronezh, Pskov and Perm, Kursk and Orel, Rostov and Volgograd there are monuments telling about the Great Victory of the Soviet people in the bloodiest war of the history of mankind, about the heroism of the Soviet tankmen and the selfless labor of tank builders. 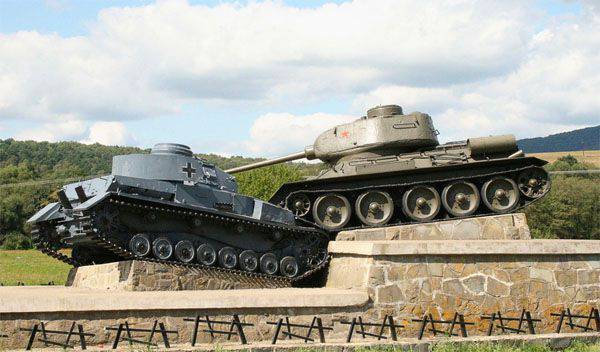 The “thirty-fours” stand in European countries, allowing our “partners” not to forget what the aggressive wars against Russia usually turned out to be. These are monuments, silent and at the same time talking about many things, in Germany, Poland, the Czech Republic and other countries.

After the actual collapse of the country's army launched at the beginning of the 90-x, today it is encouraging to see that the national tank-building industry is reviving, and the servicemen of the Russian Armed Forces tank forces are improving their skills. In the 2014 year and more than eight months, 2015, the units of the Ground Forces conducted more than 3 thousands of tactical exercises of various levels. This is a record for the entire existence of the Russian Federation. At times the number of tank guns increases. Approximately in 5 the amount of ammunition spent during the fire exercises of tank crews of various military districts of Russia increased in comparison with 2013 a year. Approximately 8% increased the volume of contracts with foreign countries for the supply of Russian tanks, despite the harsh Western sanctions imposed on Russia, with which the “partners” are trying, among other things, to leave the Russian defense industry behind the competitive edge. However, attempts, fortunately, are in vain.

The numbers of growth in the number of tank exercises, the volume of consumed ammunition during fire training, information about the continuation of the tests of the tank Armata T-14 - perhaps the best congratulations on the Day of the tanker!

Ctrl Enter
Noticed oshЫbku Highlight text and press. Ctrl + Enter
We are
New information about the main tank T-14 "Armata"Happy Tankman Day!
127 comments
Information
Dear reader, to leave comments on the publication, you must to register.