In 15 years the war began for me

14 September 2015
2
A resident of the village of Puzanovsky, Tamara Pavlovna Agafonova (nee Potapova), 40 worked for years as a dispatcher at a car factory in Kazan, which has changed many names over the years. She is now 88 years old, and she lives with memories. Her memory keeps many events, but on a special account memories of the war. 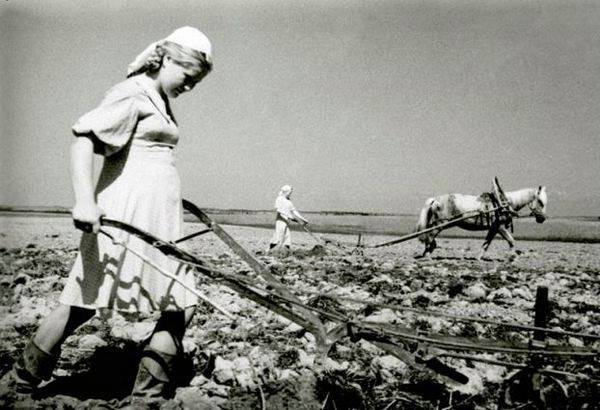 In the summer of 1942, when the Germans came to Upper Don, Tamara turned 15 years. A curious and observant girl remembered in detail the war years in the village of Kazan, where she lived with her family in early July 1942 of the year:

- I graduated from the 7 class. We had a vacation, but we worked on weeding the sunflower. I was returned home because I hurt my leg.

On the Don, the sappers built a bridge on stilts for the passage of military equipment. The bridge in the village of Komyagi (original boats), of course, would not withstand such a load. By July 6, the military completed the construction of the bridge. And through the village past our house, which was located in the very center of the Kazan village on Lenin Street, all this time our troops, soldiers armed with machine guns, machine guns, and guns, went and went to the crossing.

As soon as the bridge was finished, the German “frame” flew in, circled over the village.

The military lived in our house. I hear one officer say: “Yeah ...” I ask:

“You'll see tomorrow,” was the answer.

And tomorrow, July 7, I was carried for Don for strawberries. I collected it in a gully behind the Ozersky farm, where there is an asphalt plant today. Got a whole bucket of berries, come back. On the way, some kind of passion comes. There was a traffic jam on the bridge. Military waving pistols to get ahead.

I just got to the house, and here they are German planes! 9 pieces! In three calls bombed our Kazanka. And a bomb fell in our yard. I lay under a stone wall. A splinter fell from the wall on me, so hot, I jumped up with a fright.

After the bombing, we began to sweep, clean the hut, and the military said: “Do not clean. That's not all. And do not go to sleep in the hut. "

At night, lay down on the street under the wall, slept did not sleep, went up to clean the cattle, which was a lot. Eighth, bombing continued all day, and we left home in the evening. Around the cinder, moans, howling dogs, corpses.

The ninth was also bombed, the passion of the Lord. We again hid in the sunflowers behind the stanitsa. And on the tenth, mother and grandmother decided to quit and leave the house. They took something with them. I remember a knife and a green blanket for camouflage. Let's go in the direction of Kazan - Lopatin. On the outskirts of the village met their frightened cow.

Mother, saying: "Come with us, Venus," - snuffled the beast with her handkerchief and led them along.

This cow saved us from hunger. We came to the collective farm kultstan, located in a field near the farm Mutilinsky. 20 families gathered here, old people, children, women. Old and small slept in the hut, the rest - where necessary.

It rained on the eleventh. And on the twelfth in the evening, I remember, there was such silence as I had never heard before in my life. And in this silence there was an ominous rattle. An experienced old man told us that it’s German Tanks. Indeed, they approached the Don. And our soldiers hurriedly retreated past us, to that side of the Don. We gave them milk from our cow, and they moved on.

One day, at the end of July, clouds of German planes flew over us to Stalingrad. We flew all day, and we lay among the grass, covered with a green blanket, hoping that we would not be noticed from the sky. Soon the military arrived and said that it was possible to be on the battlefield.

From the Mutilinsky farm to the Lopatinski grader, the military dug an anti-tank ditch. They offered the mother to work with them as a cook, to prepare food for the soldiers. From August to November my mother worked, and I helped her. But in November, the unit was transferred closer to the front line. It was cold, the kultstan was broken, it was necessary to leave. Mother harnessed a cow to a cart, and we went to spend the winter in the village of Shumilinskaya to visit our relatives.

December 16 suddenly all boomed from the Voronezh region and in the area of ​​our Red Yar. This began artillery preparation. I do not know how long it lasted, but they took the wounded to the Shumilino school and to the club where the hospital was located. And we lived nearby. As the party of the wounded arrives, so mom, me, aunt, we go to the hospital in the hope of meeting friends of the military whom we have recently prepared for. Once it happened. Nikolai Ivanovich Kuznetsov was brought to the hospital, who a month later recovered and went back to the front. We helped to unload the wounded, every day I went to the hospital with milk, wrote letters, read the soldiers of the newspaper.

As soon as the Germans were expelled from the Verkhnedonsky district, we returned to Kazanka. Our house suffered from the bombing. But in the attic, fortunately, there were twin windows. They inserted the windows and began to slowly settle down.

It was a difficult time, but the turning point in the war has already come. At the end of the war, I was sent to Rostov to the courses of dispatchers. 30 April 1945, I returned home, receiving a certificate of completion of courses. And on May 1 I was hired by the Kazan auto team, where I worked all my life.

9 May 1945, the head of the auto-team Fyodor Pavlovich Pisarev, told the dispatchers:

- Today, no one will be let out on the flight. All we go to the rally. At the rally, we learned that the war was over. The day was festive, sunny.

And one more story about women's fate. About Mary's wedding in 1944.

Maria Vasilievna Beschetnova refers to a generation that fully consumed the grief in her youth, which came during the war years. Before the war, a large family of Maria Vasilyevna lived in the village of Peskovatsko-Lopatino (Verkhnedonskoy district, Rostov region).

The parents had four children: the eldest son of 1924, who was born, daughter Maria, a year younger, and two more sons born in 1933 and 1935. The family had two grandmothers. We lived, worked, the children went to school, thought about the future. But at one moment the measured life of the family collapsed. The Great Patriotic War began. Father and older brother immediately called up for military service.

Younger children stayed at home with their mother. The front was approaching the Don, and in June 1942, the German troops occupied the right bank. The bombing of the Kazan village began. Women and quickly grown up children worked day and night in the rear, trying to help the front, their dear soldiers who fought with the enemy, not sparing lives.

The elder brother Maria was not destined to return from this cruel war. Maria had already finished 7 classes by that time, and she was put to work as a seller at a farm shop.

For all my life, the day when the chairman of the collective farm sent her, a girl, on horseback to the breeder to take wool to the village of Kazan, crashed into her memory. On the way, I saw all around our anti-aircraft guns, fighters. Arrived in Kazanka in the evening, settled down for the night to friends. And then everyone heard the rumble of German planes. These were the first raids on the village.

Enemy pilots made a circle and began to drop bombs. Mary remembers the horror that took possession of all. People, mad, fled, hiding who where. And the planes returned again and again, and the bombing continued.

Suddenly, Maria saw horses that were crazed by explosions galloping along the stanitsa street at full speed, and the farmers in the wagon turned out to be familiar to the girl. She went home with them, away from the front line. Unfortunately, during the war, Maria's mother undermined her health and became seriously ill, and in 1943, she died, leaving the children orphaned.

Care about younger brothers fell on the shoulders of a young Mary and grandmother - her father's mother. Everyone lived on the ration - 3 600 grams of grain per month, which Maria received for her work as a seller.

When in the 1943 year, Peter Keschetnov, a policeman for wounding (4 shard remained in his lungs all his life) returned from the front, began to care for the beautiful Maria, and soon wooed.

- What else is married? - she lamented. - And who will feed the boys?

But the wise women of the neighbor still persuaded her grandmother, and despite all the military adversities in February 1944, they had a wedding. After 9 months, a daughter was born to the young - a living confirmation of the victory of life over death.

The war continued, but everyone in the country dreamed that their children would live happily under a peaceful sky, for which Soviet soldiers did not spare their lives and worked selflessly in the fields, on farms and industrial enterprises of home front workers. The men in the rear were sorely lacking.

A recent front-line soldier, Peter Danilovich Beschetnov, was soon appointed chairman of the village council, and the family moved to the village of Kazan-Lopatino (the village of Peskovatsko-Lopatino was renamed). A young mother began to work as a postman, leaving the baby to her grandmother.

Maria Vasilyevna and Petr Danilovich Beschetnovy lived 55 married for two years, raised two wonderful daughters, and had time to rejoice in their grandchildren. But in 1999, the life of the Great Patriotic War veteran Peter Danilovich was cut short, and Maiya Vasilievna moved from Lopatino closer to her daughters in the village of Kazan. She is proud of the fact that their family continues: she has three grandchildren, five great-grandchildren and already has a great-great-granddaughter, a nice girl Elizaveta Romanovna.

A woman who survived so many difficulties is sure that for the sake of this happiness one could endure all the trials of the war years. After all, life goes on in children.

Ctrl Enter
Noticed oshЫbku Highlight text and press. Ctrl + Enter
We are
Potapov factorToday 79 would be the first man who flew into space - Yuri Alekseevich Gagarin
2 comments
Information
Dear reader, to leave comments on the publication, you must to register.