10 September 2015
59
According to the United Nations, Europe is facing the largest influx of refugees in recent decades. In 2015 alone, over 300.000 people tried to cross the Mediterranean. According to forecasts, in 2015-2016. 850.000 refugees will arrive in Europe via the Mediterranean to Europe. The head of the European Commission, Jean-Claude Juncker, called for the expansion of quotas for the resettlement of migrants in the EU. 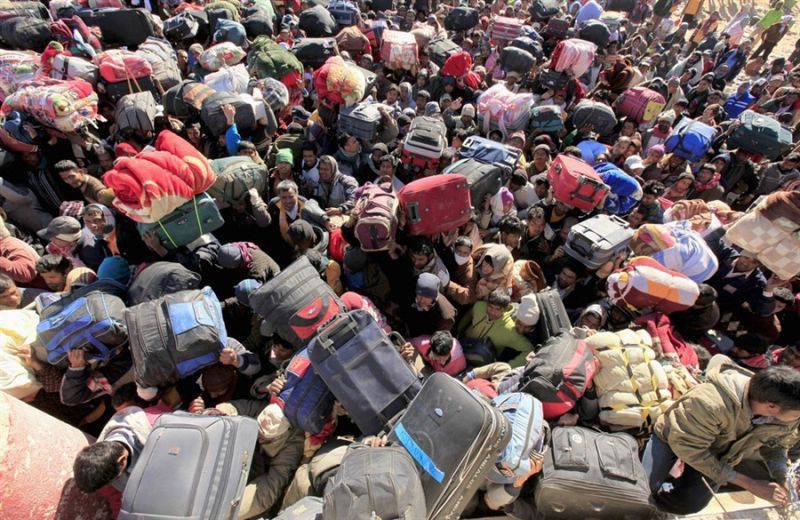 As stated by the United Nations High Commissioner for Refugees, in 2015-2016. 850 thousand refugees can arrive in Europe through the Mediterranean Sea. Reports about it RBC with reference to the Reuters agency.

The Office of the High Commissioner expects that around 400 thousands of refugees will arrive in Europe this year across the Mediterranean, and next year their number could reach 450 thousands or even more.

According to UNHCR spokesman William Spindler, the 2015 forecast for the year is close to fulfillment: the Mediterranean crossed the 366 of thousands of refugees. The UN expects that by the end of the year the flow will decrease: the cold will come, traveling by sea will become dangerous.

He notes that the European Union is preparing to hold a series of emergency meetings in order to work out solutions in response to the refugee crisis.

Guterres points out that Europe "has faced the largest influx of refugees in recent decades." In 2015, over 300.000 people tried to cross the Mediterranean, risking their lives. Over 2,6 thousand did not survive the dangerous journey.

Europe failed to develop an effective collective response to the problem. Guterres outlined the main components in the European crisis with migrants.

1. We should not talk about the phenomenon of migration, but about the refugee crisis: most of them come to Greece from conflict zones. The UN High Commissioner for Refugees calls primarily Syria, then Iraq and Afghanistan. These people “run to escape,” he writes. And he adds: "Everyone who is forced to move in these tragic circumstances is entitled to respect for their human rights and dignity, regardless of their legal status."

2. About the reaction of the community: Europe cannot continue to respond to the crisis "scattered and gradually." According to the Commissioner, the EU will have to "fully mobilize in the face of the crisis" and implement a common strategy based on "responsibility, solidarity and trust."

3. Among the necessary decisions, the commissioner lists measures to stabilize the situation and the search for opportunities for sharing responsibility in the medium to long term. And some specifics concerning Hungary, among other things: “The EU should be ready, with the consent and support of interested states, mainly Greece and Hungary, and Italy, to immediately create opportunities for emergency reception, assistance and registration.”

4. Those migrants whose claims for protection at the initial stage will be deemed justified should subsequently be given the opportunity to benefit from a resettlement program with the mandatory participation of EU member states. From here it may be necessary to expand the program to 200.000 places.

5. As for those migrants who “will not be recognized as in need of international protection,” the EU will assist them in returning to their homeland, “with full respect for their human rights”.

6. The Commissioner proposes to solve the issue of smugglers and traffickers through “effective international cooperation”. It is also necessary to expand the "legal ways of arriving in Europe in search of security."

“This is the moment of truth for Europe. This is a time to confirm our commitment to the values ​​on which it was created, ”writes Guterres.

The voice of the UN reached Europe.

The head of the European Commission, Jean-Claude Juncker, called for an expanded quota plan for accommodating migrants in most European countries, reports "Voice of America".

According to the plan, Europe can resettle up to 160.000 refugees. Most of them agreed to accept Germany, France and Spain. They are followed by Poland, the Netherlands, Romania, Belgium and Sweden. (Hungary with its fence on the border, we note, is not mentioned.)

According to Mr. Juncker, by expanding quotas, Europe will be able to cope with the influx of migrants.

But his proposals do not all approve. Voice of America notes that Hungary and a number of other European states make sharp objections. It is also known that recently, in June, European leaders rejected the proposal, which provided for the adoption of 40.000 refugees.

In addition, German representatives said that Germany expects to accept 2015 refugees in 800.000 year. Vice Chancellor Sigmar Gabriel said that a country could receive half a million refugees a year for several years.

The discussion of the refugee crisis also affected the United States.

UN Special Envoy for International Migration, Peter Sutherland, said the United States and the Gulf states are not doing enough to resolve the migration crisis. They give money to help refugees from Syria and residents of refugee camps in neighboring countries, but this is not enough. Sutherland is convinced that rich countries should receive refugees on their territory. “It’s not enough to pay off the money,” he said.

The above UN forecast for the number of expected refugees is more than 25 times the quota that the EU is counting on. EU states, recalls "Lenta.ru", agreed to accept within two years of the entire 32 thousands of migrants.

"Lenta.ru" with references to the Süddeutsche Zeitung and Focus, it reports that just over the weekend, almost 20 thousands of refugees arrived in Munich. And in the coming days, Bavaria expects 11 more thousands of people: they will arrive from Austria and Hungary.

The publication notes that on September 5, the German authorities allowed refugees from Hungary to enter the country, and the ruling coalition of the Federal Republic of Germany, led by the CDU party, decided to allocate 6 billion euros for the content of the arriving migrants. Chancellor Angela Merkel said more money was needed: 10 billion euros.

But in eastern Germany, frequent attacks on refugee camps. A wave of protests swept through the cities of Saxony, recalls Lenta. People protested against the influx of migrants on the streets, shouting: “Foreigners, get out!” In Heidenau, a rally against the opening of a refugee center turned into clashes with the police. Soothe the city itself was Frau Merkel. She was thrown into the face: “Traitor!” In response, she said that the refugees are the same people, but her crowd booed.

The businessman said that he was ready to provide rooms for his hotels to migrants who need it, and promised to give them free food. The Norwegian services said they would take advantage of Stordalen’s proposal if there were not enough places in the temporary detention centers in the country.

Of course, we add from ourselves that these are nothing more than temporary measures. No, perhaps, in the world of such a capitalist, who would give all his hotels in the lifelong use of migrants. And I would also give migrants free food.

Alas, in Western Europe, as well as in the United States, there is little thought about the roots of the emerging humanitarian problem. And should think! And at least draw conclusions for the future.

When the White House set up a war in Iraq, the president and his advisers hardly thought about the consequences. When the West later “collectively” supported the “Arab Spring” in Syria and other countries, few in Europe were able to calculate the consequences in the form of hundreds of thousands of refugees who would have to be fed, clothed, provided with housing and maintained for benefits.

Current spending in Germany - 6 billion euros? Little, says Merkel. Need 10! And how much will be then? Twenty? Forty? One hundred billion? Trillion? Who will pay? And will not all the people of Syria or Iraq, or, say, Libya, move to Europe in the end?

Fire wars, which the United States likes to organize for the sake of "democracy" around the world, least of all affects the United States. The UN special envoy for international migration, Peter Sutherland, is right when he says: “It’s not enough to pay off the money.” Let the unfortunate Syrian refugees take the United States! Accept. Let them settle in Washington, right in the house number 1600 on Pennsylvania Avenue. Or in Obama's apartment. Perhaps then politicians in Washington will understand what the support of the “moderate opposition” may lead to.

Observed and commented on Oleg Chuvakin
- especially for topwar.ru
Ctrl Enter
Noticed oshЫbku Highlight text and press. Ctrl + Enter
We are
"Trouble" of the Promised Land. African immigration to IsraelWhat to do with the refugees? Eastern Europe to host thousands of Africans and Asians
59 comments
Information
Dear reader, to leave comments on the publication, you must to register.