Poroshenko will not go to Moscow ...

9 September 2015
109
President of Ukraine Petro Poroshenko once again gives reason to "admire" the complete lack of adequacy of President of Ukraine Petro Poroshenko. Perhaps for the first time in stories the world economy, the state credited economically, not wishing to spend money on the repayment of the loan, declares that “it is not going to give any privileges to the creditor”. Yes, we heard right - Poroshenko said that Ukraine provided “privileges” to one of its creditors, as they went to restructure a part (20%) of Ukrainian foreign debt, while Russia had such a generous gift as “privileges” from Peter the Great’s shoulder, you know, does not shine ... 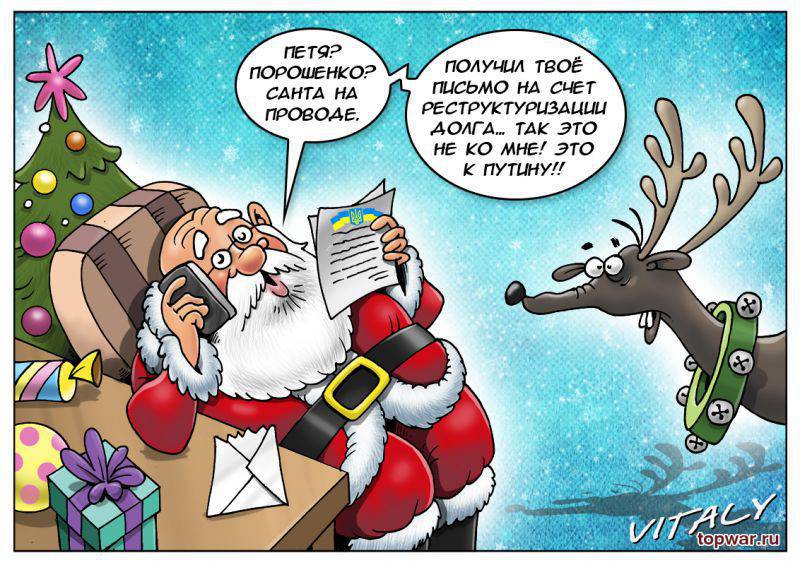 “Privileges” is, apparently, the fact that Kiev is going to pay loans at all, plus pay at new interest rates ...

Poroshenko during his meeting with the IMF Managing Director Christine Lagarde was generally in shock and sprinkled with such pearls, which can be collected in a separate volume. In addition to the fact that he, Poroshenko, will not provide any "privileges" to Russia, since Moscow refused to participate in the process of restructuring Ukrainian foreign debt, the president of "Square" said the following:

Negotiations have been held, there is no and there will be no default, and Russia should decide by the end of the year: either she is smart, or she is beautiful.

That is, in Poroshenko’s understanding, it is Russia that “must be determined” by whether to demand Kiev to pay Kiev’s debt on time or not. But Poroshenko, naturally, “both smart and beautiful,” states unequivocally — we don’t want to give a debt, because the default doesn’t threaten us anyway, because other creditors went to restructuring ...

In principle, nothing new, except, of course, the presentation of information by Pyotr Alekseevich, no one heard ... Nothing new, since the conversation the Ukrainian “partners” once again bring to the plane of waiting a big freebie. They say that we have nothing to pay, but we are not going to pay for now, but we will wait for the creditors to take turns in delaying the repayment terms, and then, perhaps, completely abandon the credit claims against nenke. How it used to say Lyonya Golubkov:

Just about - that “partner” ... Moreover, judging by his behavior, Pyotr Alekseevich himself believed that insolvent creditors could now set conditions for creditors.

By the way, a few days before communicating with Christine Lagard Poroshenko, who said who, what and how much Russia “should”, signed a document saying that Russia is “an adversary and an aggressor” for Ukraine. Thus, Poroshenko actually refers (now according to the officially adopted Ukrainian military doctrine) to the “aggressor” -Russia (for he himself has declared us like this) with a veiled proposal to postpone the payment of the 3 billionth debt. And this is also a unique phenomenon in Ukrainian, when the “aggressor” is being asked for economic preferences ... This is the whole of modern Ukraine, this is the whole “partner” of Poroshenko ...

In Russia, meanwhile, they stated that Poroshenko’s “privileges and the most beautiful” could keep his “privileges” with him, and the 3 billion-dollar debt should be returned on time - by the end of this year. The question that sounds sharp in Shakespeare is: will it return or not?

By and large, the managing director of the International Monetary Fund (and the sponsoring fund of the Russian Federation is also included in the IMF) made Poroshenko understand that he, Poroshenko, is “exempt” from default this year. As if she handed the decree about the postponement ... But at the same time, Ms. Lagarde reminded Poroshenko that Ukraine’s debt to the Russian Federation is sovereign (state), and therefore it is necessary to return it, if required, to foreign countries investment.

But, it seems that statements that if Kiev did not pay Russia by the end of December, then foreign investment would be largely blocked, Peter Alekseevich was not particularly scared. After all, Pyotr Alekseevich is ready at any moment to get out of his briefcase a new military doctrine composed recently, in which it is printed in black and white that the Russian Federation is an “aggressor”. It is like such a “joker” in the hands of Kiev and in the understanding of Kiev itself - they say, it’s only Russia that we don’t pay on debts, because it’s an “aggressor” for us, and we’ll pay all the rest - “we swear by the revolution of dignity” ... Western partners are unlikely to be somehow too zealously pushing to Kiev, demanding repayment of the loan to Russia. Is it necessary for the European Union or the IMF? ..

That is why Russia needs to be prepared for the fact that the budget by the end of the year will not receive 3's billions of dollars from Ukraine, because Kiev will dodge as it pleases, just to delay the arrival of a technical default. The most civilized, and, perhaps, it is also the most effective step that Russia can take in this situation - to file a lawsuit in an international court, if the money is not returned in time. And, there is an opinion that the court will satisfy this claim, although the litigation may drag on for years. Satisfy for the simple reason that the IMF recognizes the debt of Ukraine to Russia as sovereign, as they say, “returnable”. But he will not be satisfied immediately, in order to give Kiev the opportunity to postpone the arrival of what has long been hanging over Ukraine ...

Poroshenko is well aware, and therefore at the moment when Western creditors gave him a short respite, he is trying once again to announce that he is "committed to the implementation of the Minsk agreements." According to Poroshenko, Ukraine has “three options” from which he, Poroshenko, chooses the third. And here are the options themselves: the first is the military operation in the Donbass “followed trip to Moscow”, The second is dissociation and a complete rejection of Donbass, the third is the implementation of the Minsk agreements and the work to preserve the territorial integrity of Ukraine.

But this is an appeal to the Ukrainian radicals, in front of which Poroshenko is trying to justify himself. Like, I would not mind and move my “invincible armada” to Moscow, but I’m the “president of the world” ... Yes, and if Merkel and Hollande were to agree, one can wait for the debt restructuring by most of the creditors ...

In general, Poroshenko is maneuvering, maneuvering, maneuvering — he is trying to bypass frank shoals and protruding rocks. Another protruding rock is a debt in 3 of a billion to Russia, the payment of which Ukrainian radicals-pravoseki will not understand, and non-payment of which can lead to an unofficial drain of Ukraine by investors who can ignore the pointer from above and understand that freeloaders partners better keep their money away.

Ctrl Enter
Noticed oshЫbku Highlight text and press. Ctrl + Enter
We are
IMF Managing Director is cheating on Ukraine? ..Situational analysis of the death of the MH17 flight (Malaysian Boeing 777), made on the basis of engineering analysis from 15.08.2014
109 comments
Information
Dear reader, to leave comments on the publication, you must to register.