“He is an enemy, he will be an enemy, nemchura is villainous!” 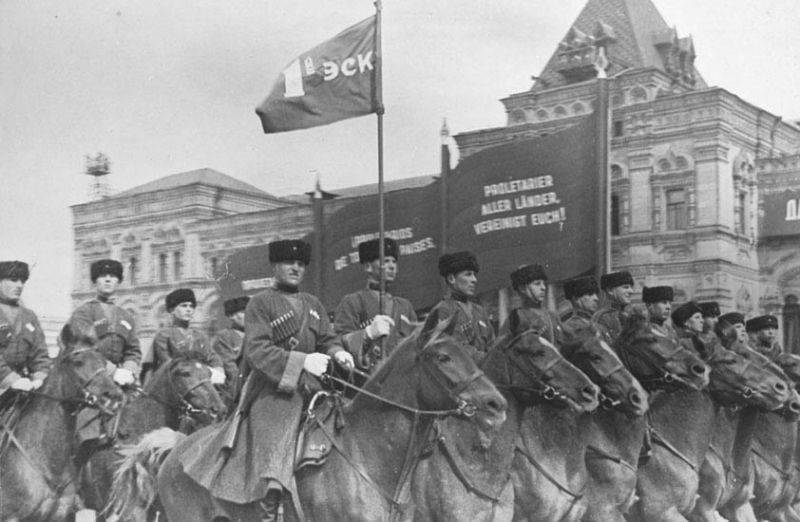 “And he came, damned, and all with crosses: on planes - crosses, on uniforms and necks - crosses. And the infant souls are ruined, Satan is underground. "

Soviet folklore is a unique phenomenon of national, and perhaps even world stories and culture. For this term has not yet developed a single generally accepted definition. In the scientific literature, the concept of "Soviet folklore" is considered in a broad sense - as the folklore of the Soviet era, and in the narrow - as an ideological phenomenon, put at the service of the Soviet regime.

In a narrow sense, Soviet folklore is commonly understood as works reflecting Soviet reality, focused on traditional epic and lyrical epic genres: epics, laments, historical songs, fairy tales. The creators of the Soviet epic folklore were individual folk performers, with whom the collectors carried out individual work, which included not only fixation, but also “creative assistance” in creating new texts.

Such works were published in collections, newspapers and magazines with an indication of the author and collector who made the recording and processed it. The transfer of these works "by word of mouth" was carried out far from always, therefore the question of how correctly to call them folklore was repeatedly discussed and remained unresolved until now.

The researchers note that, despite the installation to subordinate the verbal element to the ideological course, the carriers of traditional culture not only went to meet the author's improvisation, but often themselves initiated the creation of similar samples of folk art.

Another important feature of the works of Soviet folklore is the reflection in them of momentary realities, persons, events, their mythologization.

If the traditional epic did not respond to current political events, the works classified as Soviet folklore used the “old form to express a new ideological content.”

Undoubtedly, the folklore of the Nekrasov Cossacks of the period of the Great Patriotic War is part of Soviet folklore. According to the collector F.V. Tumilevich, the works of this group first of all reveal “the soul of the people, their attitude to the political events of great importance”.

During the war, such folk texts exerted an emotional-mobilizing effect on people. "Folded brightly, figuratively, using forms of folk art, they called for a merciless struggle against the hated enemy, inspired a sense of patriotic duty, boundless love for the motherland, for the Bolshevik party - the organizer of the national war against the German fascist invaders, who faithlessly attacked our the country ", - this emotional characteristic of the peculiarities of these works is given by the Don folklorist FV Tumilevich in the article “Oral poetry of Nekrasov people about the Patriotic War” (the book “Songs and fairy tales. Folklore of Nekrasov Cossacks about the Great Patriotic War. Rostov-on-Don, 1947 year).

Tumilevich also analyzes the mechanisms for creating works of “military” folklore of the Nekrasov Cossacks and draws attention to the important role of the individuality of the bearer of the folklore tradition. In particular, he points to “outstanding improvisational abilities” by T.I. Kapustinoy - famous storyteller-nekrasovki. “There are two features in her work. Tatyana Ivanovna very often takes the outline of an old song, or her musical system, or theme, and on this basis creates new works. Free flight of fantasy, poetic gift allows her to create not only versions, but also independent works. ”

Crying about a girl in German slavery

The main reason that prompted Tatyana Ivanovna Kapustina to create a cry about a girl who fell into German slavery “should consider the following fact: August 20 of the year 1944 of the local collective farm T.N. Gorshkov told her about the content of an article published in the newspaper Pravda about a Russian girl who had escaped from a German penal servitude. Gorshkov’s story, which had a strong effect on Tatyana Ivanovna, evoked in her memories of the nightmares of the occupation of the village by the Germans. All this influenced the creation of this cry. "

Another well-known songwriter, Ivan Gospodarev, the only connoisseur of legends about Ignat Nekrasov, “lived with the image of Ignat and, during the days of the Patriotic War,“ resurrected him from the dead, ”made him a participant in the great battle at Stalingrad.”

Thus, the historically authentic fact fades into the background, giving way to other artistic tasks. So, F.V. Tumilevich emphasizes that “during the period of the Patriotic War, the whole life of our country was subordinated to the interests and needs of the front. The poetry created by the Nekrasov Cossacks reproduces this great goal with extraordinary brightness. ”

The folklore of the Nekrasov Cossacks of the period of the Great Patriotic War bears the hallmarks of works of oral traditional culture. Modern events described in songs, hairstyles, fairy tales, are overgrown with motifs that have deep roots. Thus, the image of the enemy in the Slavic traditional culture is related to the concept of "alien", often associated with the image of a foreigner.

The assessment of "alien" as hostile and dangerous creatures goes back to the archaic notion that all people who came from outside and not belonging to the community are representatives of another world, are endowed with zoomorphic features.

The foreigner, as a rule, in the national consciousness is compared with an unclean animal. So the Germans, who invaded the Soviet state with the war, appear in Nekrasov's texts in the form of jackals: “And they pounced on your white body, like jackals, they began to torment you.” And also the ravens: “Why, they flew over the white swan, all the ravens are German, the crows are black. They want to kill you, to stub you, beloved. " And also serpents: "Damn you, mothers who have sporodivshie serpents fierce!", "You go back to our falcons love, chop up the serpent with serpent heads, so that they do not crawl along our land."

The origin of a foreigner in Slavic traditional culture is often associated with the devil, the evil force. We see the same in the tricks of Nekrasov: “And he came, damned, but everything with crosses: on planes — crosses, on uniforms and necks — crosses. But the infant souls were ruined, Satan was underground, ”“ And they went to that unclean enemy, to the damned destroyer, damned if he were a thousand times and three times damned, let him have no place on the final judgment ”; "How they came, the antichrists, and the evil nemchugi treispodniya"; "And they, evil vorog - nemchuga treispodniya ..."

Above, as one of the hallmarks of Soviet folklore, we have characterized the use of the traditionally form of folk art to reflect the realities. In Nekrasov's tales and wartime fairy tales, traditional images of epic monsters are used to refer to German enemies: “Darn Kozhedere, bloodthirsty Snake Tugarinin” (about Hitler); “And they, evil vorogy-nemchuga treispodniya, but with their Serpent Gorynychem all eat our children, but they will not eat”; “In not our kingdom, not in our state, there lived a wicked, greedy king. Then he turned around with a serpent about twelve heads, seven trunks, and crawled with serpent serfs over the lands conquered. ”

In accordance with traditional notions, the connection of a foreigner-German with the “alien” space is emphasized: “In not our kingdom, not in our state, there was a wicked, greedy king. He began to seize the land.

According to traditional notions, the blackness serves as a sign of the demonic nature of German aliens: “Beit him, the antichrist, until his black German land has devoured the dust!”; "Ignat, everything goes along with the Red Army, and until he lies in the grave, until the black city of Berlin, our will not take."

Enemies-aliens desecrate the land on which they came: “Oh, the mother of the cheese ground moaned. Oh, for me all the vorog go. Oh yes, vorog, they are German. Oh, they go and they will trample me, they trample me and they burn with fire. ”

In addition to the mythological characteristics, the Germans are endowed with completely "human" qualities: they are characterized as "thieves", "robbers", "destroyers", "evil nemchugs", "fierce robbers", "Germans infected", "cursed monsters": "A and They went to the thief of the unclean, to the destroyer-nemchugu damned. He is an enemy, he will be an enemy, a villain of a non-spirit. " "How they came, the antichrists, and the evil nemchugi treispodniy, like robbers, they are lyutai." “They don’t believe, they start looking around the house, in the courtyard. They spotted it all, and then they began to pick up what they liked. Who has a gramophone, who has a watch, who has his clothes pulled, and who has a chicken, a pig, baked bread. ”

Extremely scornful authors-narrators speak of farmers who have gone over to the side of the enemy, "politsyah"; but these farmers are “not ours,” from the “aliens”: “Damn him the policeman three times! We lived before the arrival of the Germans, anathema; he was not ours - he was from the aliens. We gave him bread and bread, and they gave him a hut, and some clothes, and he, the dog’s snout, immediately after the Germans came, entered the policemen. ”

Ctrl Enter
Noticed oshЫbku Highlight text and press. Ctrl + Enter
We are
Crosses in all their diversity (continued)Diplomats of the People's Commissariat of Defense: on the eve and during the war
5 comments
Information
Dear reader, to leave comments on the publication, you must to register.