First call You will understand this a little later. 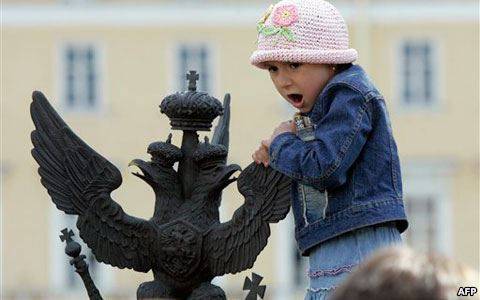 I have just been on a solemn lineup in one of the St. Petersburg schools. Attended the first call.


Well, I can tell you, Panove ... It was very nice. Really a children's holiday. Without propaganda psychosis. Without stories about someone's greatness and unmatched. Without a five-minute hatred of vorogami. Without moronic pathetic songs about the great ukrov. Without these cheap, slobbering-snotty public confessions in the boundless love of "batkivsvyni". Without all this paranoiac propaganda ukromarazm, which children are now slaughtered in Ukraine.

Imagine, in Russia on September 1, they don’t shake national flags, hysterically, don’t admit love for their motherland, don’t wear jackets under their jackets, and don’t let balls in national colors fly into the sky.

I stood, listened to the Russian anthem, so familiar and intimate, looked at people and thought that many of them did not understand what they had. A normal, healthy society, a strong state, an intensively developing country ... Only we Little Russians can fully understand all this benefit now. Because we are deprived of all this, turning into wild ukrov.

I also thought that I wanted to hear this soul-catching anthem in Kiev. Really want to! Because only then will the torments of my poor, deceived people stop! I want Russia to become Rus again! I want my little homeland to throw off the yoke of the bl ... th Ukrainians! I want it to once again become the primordial, ancient, truly Russian part of Russia! I want order, calm, well-being, wealth, culture ...

I don’t know about you, shanovne panstva, but I will make maximum efforts so that my small homeland would throw off the yoke of Ukrainians! I will do everything I can to hear again in the originally Russian city of Kiev ...

Russia is our sacred state
Russia is our favorite country.
Mighty will, great glory -
Your wealth for all time!
Be glorious, our free Fatherland,
The brotherly peoples of the union age-old,
Ancestors given wisdom of the people!
Hail the country! We are proud of you..!

Ctrl Enter
Noticed oshЫbku Highlight text and press. Ctrl + Enter
We are
How the US turns Russia into a white "Rwanda".Pavel Astakhov: "Americans can not cope with the education of foster children from Russia"
94 comments
Information
Dear reader, to leave comments on the publication, you must to register.