Where can Europeans send their own tolerance? ..

2 September 2015
103
The problem of uncontrolled migration is becoming one of the tools for those politicians who claim high posts in power in their countries, declaring their readiness to go to the polls. And the applicants for these highest posts (first of all European), who blame the current authorities for the failure of the migration policy, which must be confessed, have many chances that potential voters will pay close attention to them (candidates).


Another question is whether these applicants will be able to (if enough voters vote for them) in new positions for themselves to effectively solve the migration problems of the same EU? But during the election campaign, the discussion of this issue itself looks sly, since from promises to their implementation by politicians both in Europe and outside the “fraternal democratic union”, sometimes there is a real chasm. But it also happens that obligations are realized.

Particular attention is paid to the fact that, against the background of the actual migration of peoples (out of only Syria, outflows about 9 million citizens, most of whom went or sent to the European Union countries), right or even ultra right parties are gaining popularity in the EU.

Thus, in Hungary, the growth of the popularity of the Movement for the Best Hungary (Jobbik) is recorded. In the parliamentary elections last year, the party, which a few years ago in Hungary itself was considered almost fascist, gained more than 20,5% of votes and became the third largest political force in the state. If you believe the polls today, about a third of Hungarians believe that it is the policy of this party that can lead to order in Hungary, especially with regard to migrants. That is, plus 12,5% rating for the year! Significant increase.

It should be noted here, and why Jobbik, founded in 2003, turned out to be very popular in Hungary in 2014. A year ago, representatives of the right party were in fact the only political force in Hungary, which openly spoke out that it was time to spit on European pressure and abandon support for European sanctions against the Russian Federation, which in the end also affected the economy of Hungary itself. The leadership of the party in 2014 of the year stated that it was time to restore full-fledged trade and economic relations with Russia, since the interests of Hungary should be in the first place for the Hungarians. Many Hungarians liked this statement. Hungary, by the way, is actually already proceeding along the path of bypassing anti-Russian sanctions - it suffices to mention contracts with Rosatom for the construction of the 5 and 6 units of the NPP in Paks.

Now representatives of the same political force in Hungary offer their solution to the issue of illegal migration. On the official site Jobbik A material appeared in which it is said that the situation could be saved (attention!) by changing the constitution of the country. The chairman of the right of the Hungarian party, Gabor Von, believes that a clause should be introduced into the constitution on the possibility of using national self-defense forces to protect Hungary’s state border. From the message of Gabor Wonah:

Hungary has to send a clear signal to neighboring states and to Brussels, a signal that our country will not allow illegal migrants to cross their borders. Anyone who crosses the borders of Hungary illegally, will be sent back.

According to Jobbik, chairman of the Hungarian party, you need not to wait for a “pan-European solution”, but to act for yourself, and act the sooner, the better.

Gabor Vona:
What we see is only the first wave of migration. Analysis of the processes show that migration will be intensified and become even more significant in the future. Our country can be a real target. This is a disaster for Hungary. Uncontrolled migration threatens public and state security and even the health of the nation.

It turns out that the statement by the leader Jobbik that the constitution should be turned into a basic law specifically for Hungary as an independent state, and caused an influx of rating percentages of this party. It is clear that for Brussels, statements about the priority interests of Hungary over the interests of the EU look like “parochial radicalism”, but the catch for Brussels is that it’s not only the representatives of the Hungarian right that express roughly the same thoughts about their countries. Virtually any politician (opposition to the current EU authorities), calling for a reconsideration of attitude towards border protection and absurd tolerance, is gaining rating points from the electorate in Europe today. These policies include, for example, Marine Le Pen in France. Marine Le Pen proposed to stop “playing tolerance” and return full border control at the internal borders of the EU. French presidential challenger quotes Interfax:
I am terrified by the inaction of our authorities, I am extremely concerned - as a result, one and a half million people will try to come. With the Schengen zone and the disappearance of the internal borders in the EU, there are no longer any means left to physically resist these massive movements. Most of the people who come are not political refugees, just stop telling tales to the French.

Indeed, fewer and fewer French (and other citizens of EU countries) believe in government tales of "political refugees" after such photos appear on the network: 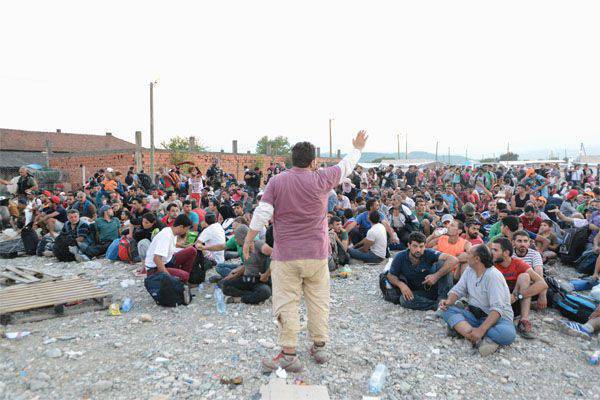 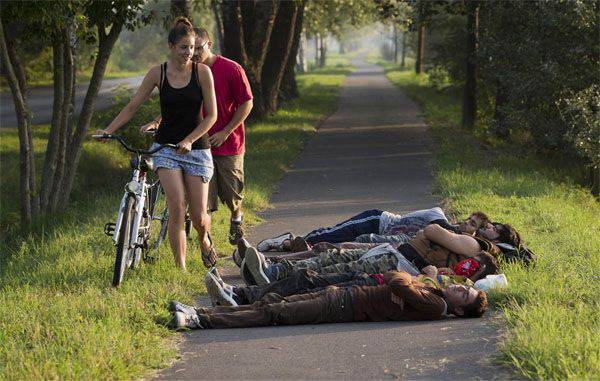 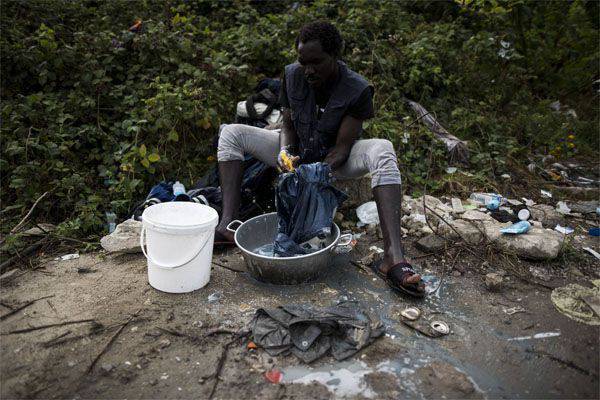 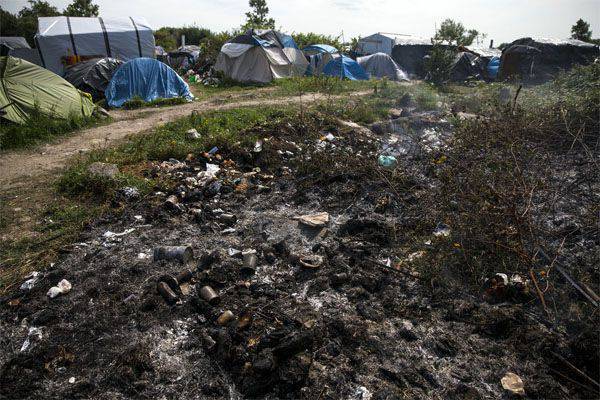 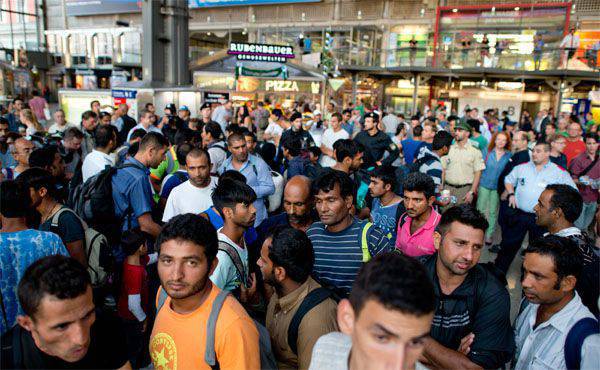 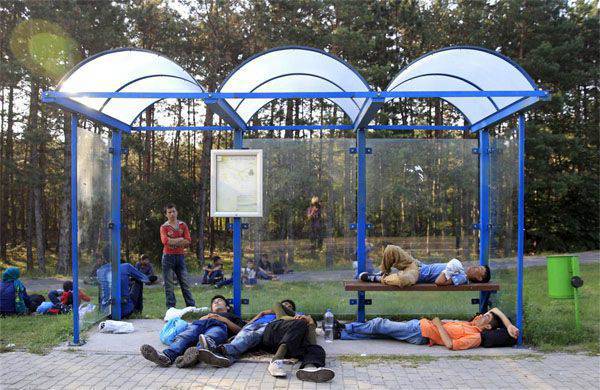 When refugees from Africa and the Middle East fill railway stations, bus stations and stops, when high and wide landfills become an indicator of the location of temporary camps for immigrants, when new refugees break through the border with thousands, claiming for economic benefits from Hungarians, Germans, French, Czechs and others, in this case tolerance is sent even by tolerant Europeans ... far away. The degree of indignation is growing by the soft policies of the current European authorities, and with it the degree of radicalism. And what can all this lead to? - it will not undertake to predict with accuracy any Nostradamus ...

It is noteworthy that harsh rhetoric towards migrants is gaining popularity in the United States, a country whose actions as an “elephant in a china shop” have become the main cause of migration waves. Thus, the US presidential candidate Donald Trump, added himself points political rating, stating that if he becomes president, he will expel all illegal immigrants from the United States.

Trump:
We will work with them (with illegals - author's note). They will have to leave the country, since this is our country, and it is up to us to decide what to do with uninvited guests.

Despite the fact that even the Republicans, whose party he is ready to take part in the elections, call Trump an “inconvenient candidate,” Trump has the highest rating among republican candidates for the main post in the country.

That is, the tendency is simple: the less tolerant questionings, the higher the rating of the politician ... One gets the impression that only the finally “пря tolerant” Euromass is admiring politicians with gingerbread. But she already thinks that politicians with whips can be more popular today. But where is that balance? .. Doesn’t it turn out that the policy of frank not tolerance, but toleration, that has been pursued for decades, will lead to the emergence of a whip of the 30's beginning model in Germany? After all, nobody has yet canceled the extremes in politics, but no one has yet found the political middle ground ... And to what extreme the western world will strike - perhaps the main question of the coming years for the western world itself. And, perhaps, also a lesson (for those who are able to learn lessons) on the topic: "What will happen if you wreak havoc under the guise of democracy?"

Ctrl Enter
Noticed oshЫbku Highlight text and press. Ctrl + Enter
We are
Migrants go north. The specifics of the migration situation in ScandinaviaIn Hungary, the wall, in Italy - the protests. How Europe solves the problems of illegal migration
103 comments
Information
Dear reader, to leave comments on the publication, you must to register.