Exact figures: the lies of Yatsenyuk and the inevitability of the Ukrainian default 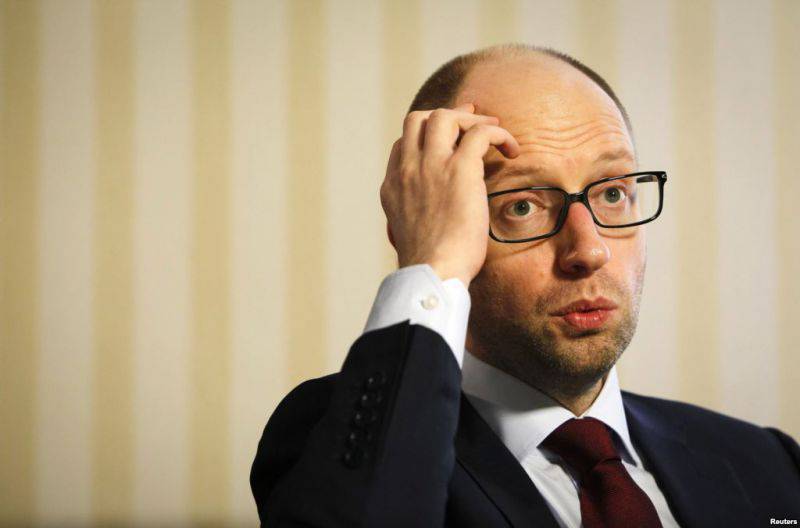 Recently, Arseniy Yatsenyuk happily reported that private creditors wrote off 20% of government debt to Ukraine. In this regard, the Ukrainian prime minister proudly declared: “the default expected by our enemies will not take place.” Twenty percent of the aforementioned debt is $ 3,6 billion of the total $ 19,3 billion. If the Ukrainian government succeeds in agreeing on a similar write-off of debts for state-guaranteed foreign currency debts of state-owned enterprises, the total amount of debt forgiven can be $ 3,8 billion.

Thus, instead of $ 19,3 billion, Ukraine needs to give $ 15,7 billion to private creditors. Naturally, seeing such numbers, the Ukrainian prime minister was dizzy with success, and the Ukrainian press began chanting: “Peremogh!” But is it? I think the triumphant reports of the Cabinet of Ministers should be checked with a calculator in hand. After all, when dealing with fraudsters, it is necessary to calculate everything to the penny.

We note the fact that Yatsenyuk diligently ignores one small, but very important nuance. The lenders agreed to forgive Ukraine $ 3,6 billion and move the return of loans by four years with the condition that the Ukrainian state raises the interest rate from 7,22% to 7,75% per annum. At first glance, it looks like a trifle. However, the consequences of this trifle is worth counting.

So, before concluding an agreement with creditors, Ukraine needed to give $ 19,3 billion during 9 years (from 2015 to 2023) and pay 7,22% per annum from this amount, which is $ 1,4 billion per year. Thus, all of Ukraine initially had to pay $ 12,5 billion on interest. To this we add the loan body and we get the total amount of $ 31,8 billion (this figure is approximate, since it does not take into account the gradual return of the loan itself, which will reduce interest payments).

And now let's see how much it will be necessary for Ukraine to pay now, after concluding it seems like a very profitable contract with creditors. $ 19,3 billion total debt reduced to $ 15,7 billion. Interest rate increased to 7,75% per annum. The term of public debt repayment extended to 2027 year. That is, you will have to pay interest on 13 years: from 2015 to 2027. Now we count. In the year of interest, the state will have to give $ 1,2 billion. For 13 years, an amount of $ 15,8 billion is accumulated. To this we add the loan body and we get a total amount of $ 31,5 billion.

I can assume that it is still “Zrada”, if we consider that the other day the Fitch international rating agency lowered the long-term issuer default rating of Ukraine from CC to C. And this happened against the background of the agreement of the Ukrainian authorities with private creditors to write off the so-called 20% of the national debt. Assigning a rating of "C", according to the classification of Fitch, speaks of the inevitability of default in the performance of debt obligations. After “C” (default is inevitable), there is “RD” (partial default), and then “D” (default).

Fitch believes that the restructuring of the debt of Ukraine means financial losses to creditors and the inevitable default. Writing off part of the public debt will lead to the fact that the default rating of the issuer of Ukraine in foreign currency will be lowered to the “RD” level, and this suggests that the issuer has not made timely payments taking into account the grace period for some, but not all, of the obligations, and continues to make payments on other types of obligations. Simply put, this means that Ukraine continues to pay the IMF debts with new loans, and refuses to pay all other creditors.

The problem with the Ukrainian debt is complicated by the fact that the $ 19,3 billion mentioned, around which serious passions have flared up, is not the entire national debt, but only a part of it - borrowed by private creditors to Ukraine, Kiev and Ukrainian state-owned companies. The Cabinet fought like a lion only for the restructuring of this part. And not the biggest. The fact is that by the beginning of summer 2015, the Ukrainian state owed all its creditors $ 67,7 billion. Of these, $ 43,5 billion was attracted by the country abroad, and the rest in the domestic market. It should be borne in mind that loans of the IMF and other international financial organizations, as well as foreign countries, are categorically not subject to write-off.

For this reason, Russia refuses to participate in the write-off of the so-called 20% of Ukrainian debt. After all, she is not a private lender, and therefore the Ukrainian government can not put it on the same level with Franklin Templeton. With all the desire of Kiev, from a legal point of view it is impossible to do. Hence, the statement of the Minister of Finance of Russia Anton Siluanov that Moscow does not intend to write off 20% of Ukraine’s 3 billion Eurobond debt. There is no reason for this. Moreover, now, due to Western sanctions, the fall in oil prices and the new wave of the global financial crisis, Russia itself is experiencing difficulties due to lack of money. This means that December 20 of Ukraine will be obliged to repay 2015 to Russia for a total amount of $ 3 billion. If it does not do this, it will be first awaited by an international court and a partial default, and then the rating “D”.

It is clear that the Ukrainian state does not have the necessary money to pay off its debts to creditors. And will not. This does not allow to make the economy of the country. Firstly, the Donbass (the most developed industrial part of Ukraine) has not paid taxes to the Ukrainian treasury for a long time. Secondly, in Ukraine for the second year, there is a catastrophic decline in production, accompanied by the shutdown and closure of enterprises. For example, in May 2015, compared with the corresponding month of 2014, industrial production in Ukraine decreased by 20,7%.

The average salary in the country, in March of the current year, according to the State Statistics Committee, fell to 170 dollars per month. That is, the purchasing power of Ukrainian citizens has become extremely low, capable, at best, of ensuring only their physical survival. That is why the country's retail trade collapsed by 28,6%, wholesale - by 18,3%. Shopping areas are idle, stores are closing, markets are shrinking, supermarkets simplify the range of their products, foreign brands are fleeing from Ukraine.

The inflation index in July 2015 compared to the same period 2014 of the year was 155,3%. Only from the beginning of 2014, the hryvnia has depreciated 3 times. And this is despite the fact that at the moment its official rate is purposefully kept by the NBU within the framework set by the IMF, and it is impossible to buy foreign currency freely in Ukraine. It simply is not in exchange.

And, finally, the collapse of Ukrainian GDP continues. In the first quarter of 2015, it collapsed by 17,2%, and in the second quarter - by 15%. It should be borne in mind that the state budget of Ukraine for the 2015 year is formed on the forecast, in which the fall in GDP is 5,5% with inflation of 26,7% and the average annual 21,7 rate per dollar. It is easy to see that this forecast does not correspond to the facts, no matter how official statistics try to understate the scale of the economic catastrophe. Therefore, the money from the Ukrainian government is not and never will be. For objective and beyond the control of the Cabinet. And this means that the default of Ukraine is a matter of the near future only.

We are in Yandex Zen
Interview of V. Putin to Channel One and the Associated Press Agency
What you didn't want to know about England
58 comments
Information
Dear reader, to leave comments on the publication, you must to register.