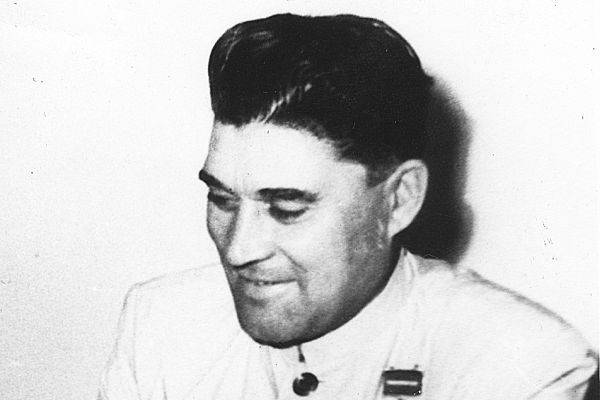 In the cemetery of the town of Liski in the Voronezh region there is the grave of a locomotive driver Grigory Mikhailovich Shumsky. Liski is a city of railway workers, there are many famous machinists there, but Shumsky is the only holder of the ruby ​​star of the Labor Hero of the People's Republic of China.

In his family there is a banner with embroidered inscription "In memory of an exemplary employee of the railways of the Chinese People's Republic, Comrade Shumsky Grigory Mikhailovich." Although there was a time when the insignia from the Middle Kingdom almost played a cruel joke with Shumsky ... The family and Soviet awards of the heroic grandfather are kept: the Order of the Red Banner of Labor, two medals for valiant work during the Great Patriotic War. Her Shumsky passed (or rather, drove) from beginning to end, drove an armored train and came under fire.

The war began for a young engineer with the fact that the transport, in which the railway workers were ferried from Estonia to Leningrad, was sunk by German bombers. 33-year-old Gregory and his brother Konstantin, also a railroad worker, jumped overboard and sailed to Kronstadt, which was on the horizon. They sailed long, dead tired ... Towards the boats came out, and the sailing rescued. So Shumsky fell into blockade: he drove armored trains and military echelons, he lost weight on 28 kilograms.

- In 1942, he was sent to Liski (then Gheorghiu-Dej). There, Gregory, with other railway workers, equipped an armored train and led him to Voronezh - to protect the city from the advancing fascists, - said the writer and local historian Vladimir Yeletsky. - They arrived at the suburban station Otrozhka, and there were already Germans. Shumsky turned on the reverse and reversing drove the train back to Liski. The assistant was killed - an explosion to him, leaning out of the window of the engine, tore his head. So Grigory Mikhailovich himself and the composition led, and the arrows translated, and threw coal into the furnace.

After the victory over Germany, the adventures of Shumsky did not end, although at first everything went smoothly: he returned to the Baltics, got married, became an engineer-lieutenant of traction and head of the section of the Estonian railway. In May, 1950, Grigoriy Mikhailovich, noticed the rails that had been disassembled in front of him and saved the train from the crash, and the trackman Arud from inevitable death. The attackers dismantled the rut right at his booth, which a train that had gone from the path would have certainly crushed. The management of the road announced gratitude to Shumsky and issued an award.

When the war in Korea began, Grigori Mikhailovich drove armored trains and trains of military cargo to the Peninsula.
Two months later, as an experienced specialist, he was sent to China to establish the railway transport destroyed by the Japanese and the civil war. Shumsky became the first Soviet specialist in the Mudanjiang depot: he taught Chinese colleagues to drive heavy trains and soon, along with a student and assistant Liu Fanchi, conducted the first long train in China.

When the war in Korea began, Grigory Mikhailovich drove an armored train and trainloads of military cargo to the Peninsula. As the number of students of Shumsky grew, his authority grew among the railway workers, Chinese newspapers began to print portraits of the Russian driver. In 1951, he was asked to give a report at the All-China Railway Congress held in Beijing. There, the Minister of Railways of China and handed him the Ruby Hero star.

- It happened on the birthday of Shumsky's son - my wife went to China with her husband. He did not receive any dividends from the high award, rather the opposite - during the aggravation of relations with the PRC, the driver’s picture disappeared from the Hall of Fame, ”continued Yeletskih. - And when he returned to Estonia, the neighbors flocked to Shumsky's house, because it was rumored that Grigory Mikhailovich had brought a little Chinese.

Making sure that the child is quite ordinary, of European appearance, the neighbors dispersed disappointed.

“We had very good neighbors in China,” recalled Grigory Shumsky’s wife, Maria. - He liked our baby. Unusual love for children is a distinctive feature of this nation.

When the Shumskys left Mudanjiang, the neighbor caught up with them and handed over to Grigory Mikhailovich the negative on a glass plate with the words: "When the son grows up, show him my photo so that he remembers Uncle Lee." In addition to the negative and the order, the driver took to the Soviet Union a medal, a banner and a memorial book with warm reviews about him and words of gratitude.

For two more years our hero worked in Mongolia, and then came to Liski, where until 1965 he worked as a trainer for locomotives and as a locomotive depot driver.

- After retirement, Grigory Mikhailovich lived 30 more years. He died in 1996, an invalid, having no privileges and even the title of a veteran of the Great Patriotic War, - Vladimir Yeletskih finished his story. - Is it fair?

The armed conflict between North and South Korea continued from 25 June 1950 to 27 July 1953, the war was not officially declared. Historians view the confrontation on the Korean Peninsula as an indirect conflict between the USSR and its ally China on the one hand, and the United States and its allies on the other. The Korean coalition and the Chinese army were part of the northern coalition (formally, the PRC did not participate in the war, so its units were called "Chinese people's volunteer formations").

The Soviet Union also did not officially take part in the Korean War, but it financed and supplied the troops of the northern coalition. Soviet military advisers also worked on the peninsula. On the side of South Korea were the United Kingdom, the United States and a number of other countries under the flag of the UN peacekeeping forces. The armed conflict did not change the geopolitical situation on the peninsula: after the war, Korea remained divided into two parts, still under the influence of the USSR and the USA. Their borders have remained virtually unchanged. At the same time, 80 percent of the industrial and transport infrastructure of both countries was destroyed, three-quarters of government institutions, about half of the housing stock.

Ctrl Enter
Noticed oshЫbku Highlight text and press. Ctrl + Enter
We are
Military orders and medals of the Soviet Union. Order of the Red BannerRussian armored train
13 comments
Information
Dear reader, to leave comments on the publication, you must to register.