New Polish President: closer to NATO and farther from Ukraine

August 19 2015
17
Recently, 6 August, Pan Andrzej Duda, at a joint meeting of the Sejm and the Senate, took the presidential oath on a copy of the constitution, written in pen. What can we expect from the new Polish president, who proposed before the elections to rewrite the very constitution on which he swore allegiance? 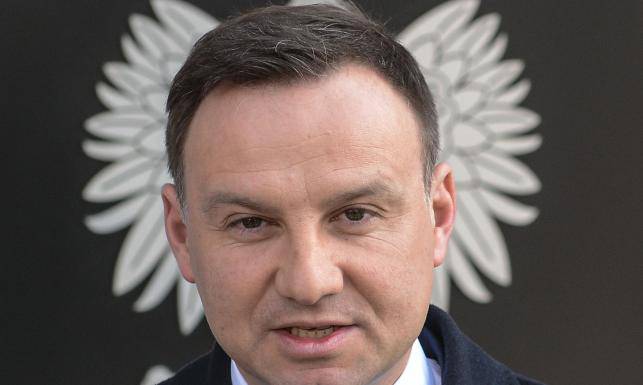 Recall, Pan Duda, nominated by the party “Law and Justice”, won the second round of the presidential election 24 in May 2015. He scored 51,55% of votes, just three percentage points ahead of a competitor - the then current President Bronislav Komorowski (48,45% of votes).

Earlier in May, 2015 of the year, being a presidential candidate, Andrzej Duda, stated that he would like to change the country's constitution. However, you do not need to be afraid of such a statement: Duda just wants to introduce into the Basic Law an article allowing for national referendums. Ban Duda takes into account the wishes of the people: two thirds of Poles are in favor of appropriate changes.

Sworn to 6 in August on a special handwritten copy of the constitution, Andrzej Duda addressed the parliamentarians and guests with a speech. His theses have already been replicated by the world press; it remains for us to summarize them.

First, Mr. Duda informed the guests and parliamentarians about the upcoming Warsaw policy towards NATO. According to him, Poland needs more guarantees from the alliance. What are these guarantees and “against whom” are they sent? Apparently, against Russia, since Duda believes that the time has come to expand the presence of NATO forces in Central and Eastern Europe. The new president does not intend to postpone the matter indefinitely: he will come directly to the NATO summit for guarantees. That one will take place in the Polish capital in less than a year.

In the meantime, the Poles are being defended by a valiant native army. This, so to speak. Secondly. So that compatriots were not afraid of the Russian threat and other threats (from the Ukrainian radicals?), Pan Duda went to Pilsudski Square, where he accepted a parade of armed forces as commander-in-chief.

There are, however, and third. Duda, as could be understood from his previous statements, including those made after the elections, is not going to spoil relations with Russia. Apparently, because it is impossible to spoil the spoiled.

Finally, the fourth. Dudu has long been occupied by the so-called Ukrainian question. He intends to organize a peace conference in which, in his opinion, Poland and other neighbors of Ukraine should participate. In short, a new world judge of regional geopolitical scale will soon be revealed to the world. If he is allowed to appear the powers that be.

15 August on the network just appeared a new statement Duda on this issue.

The President of Poland proposed Petro Poroshenko a new formula for peace talks on Donbass. He said this in an interview with "Polish Radio", reports RBC Ukraine.

Interestingly, the emphasis in his statement was placed on the "strongest" European states. Duda told reporters that over the phone, he made Poroshenko a proposal to participate in the negotiations of the strongest states of Europe and the neighbors of Ukraine, including Poland. According to Duda, now representatives of Kiev and Warsaw are preparing a meeting.

However, so far all this is nothing more than words. The route of the first state visit of Duda was laid not at all to Ukraine, but to fraternal Estonia.

As transmits UNIAN with reference to "Polish Radio". The new president of Poland will make the first foreign visit to Estonia. Tallinn Pan Duda will visit 23 in August, just on the anniversary of the signing of the Molotov-Ribbentrop Pact.

But the plan for further visits Duda: 28 August - the city of Berlin, September 15 - the city of London. 21-22 September Duda will again visit Germany. (Yes, yes, those “strongest” states.)

Well, and then - to bow to the master: at the end of September, Andrzej Duda will fly to New York, where he will meet personally with Barack Obama.

Late autumn new tour starts in fraternal countries. In early November, the president will depart for Bucharest: there he will take part in the NATO mini-summit.

Then Duda will visit Beijing - the summit "Central Europe - China" is scheduled there.

And where, excuse me, brotherly Kiev? After the Chinese?

It turns out that the date has not yet been agreed. UNIAN indicates that the Polish president will meet Poroshenko over the next hundred days, but it is not known where and when. So said the Minister of the Office of the President of Poland Krzysztof Schersky.

That's it. Ukraine will wait.

As for the visit to Estonia, it is full of symbolism.

“The fact that this is the first foreign visit of President Duda,” said Ilves, “and his destination, Estonia, once again proves close allied relations between our countries.” Poland plays a central role both in upholding the security interests of our region and in strengthening the unity of NATO, and we all see Poland’s persuasiveness in defending the common interests of the European Union. ”

According to the Estonian president, Duda’s visit will take place on the anniversary of the signing of the Molotov-Ribbentrop Pact, after which Poland was the first to lose its independence, followed by the Baltic countries.

There is another symbolism here, let us add it from ourselves. Dude 43, he is relatively young, but he is from conservatives. And the Polish conservatives are not ready to forgive Ukraine a dark past. That is why Duda and insists on negotiations with the participation of Poland. Warsaw must have its say - for example, about the inadmissibility of the glorification of Bandera.

Experts-historians express their opinion about the future difficult relations between Warsaw and Kiev.

"Duda talked about that, - lead "Vesti" doctor's words historical Sci., Chief Researcher of the Department of Eastern Europe, INION RAS, Larisa Lykoshina, - that he is not ready to forget the historical past, he is not ready to forget the difficult pages of Polish-Ukrainian relations. And the glorification of the OUN-UPA, which the Ukrainian politicians allowed themselves, caused a wave of discontent in the Polish political class. Do not think that everything will be so cloudless and unambiguously developing in relations between Ukraine and Poland. There are complex pages there, and, probably, they will not contribute to an unequivocally positive, positive and progressive dialogue between Poland and Ukraine. "

The question of the alleged anti-Russian attitude of Duda is also interesting. Analysts say and suggest a lot, but all these assumptions are not worth a jigger. What to say, why waste words if a person became president a few days ago?

One thing is clear: Duda intends to turn the border of Poland into the border of NATO. More precisely, in the fortified border. And theses about the Russian threat here can be played up clearly and covertly.

With regard to NATO, Duda has already done something. Giving an interview to Polish Radio, he said that he was counting on the deployment of NATO bases in Poland. According to him, which leads "Russian newspaper", a package of relevant proposals is already being prepared - the ones that will be presented at the Alliance Summit in Warsaw in 2016.

In a recent interview with the radio station, Pan Duda announced that he had held talks with some leaders of NATO member countries, with the Secretary General of the North Atlantic Alliance and the Supreme Commander of NATO forces. The outcome of the negotiations: the Polish president "did not meet categorical objections." The president explained the favor of NATO members ... with his own logic: that his proposals were simple and clear. NATO bases have always been located on the borders of the alliance, particularly in Germany; Today the situation has changed.

This “situation has changed” means that Duda is referring to the geopolitical phenomenon of the “Russian threat”, even though he does not voice it out loud. Such a hidden hint must indulge Poroshenko’s tormented heart, whose path to good relations with Poland is a big question.

After the inauguration, the new president did not make any statements that would make Pan Doud refer to Russophobes. We assume that he will not do them, since relations between Poland and Russia are already ruined for a long time. Only sanctions and demolitions of monuments are worth.

To wait for a deterioration in relations with the Poles, so it is the Ukrainians. Not only Poroshenko, but also the common people, who love to make extra money in the fraternal republic. This is especially true of Western Ukrainians.

Martin Domogala, President of the European Center for Geopolitical Analysis, said in an interview Pravde.ru: “The problem is that Ukrainians want to work in Poland. Most of them come from Western Ukraine. But they get a small salary. For them in Poland, only this kind of work. ”

As for Russia, Martin Domogala explained: Andrzej Duda is a young politician, and his specific plans are unknown. Domogala hopes that he will be a pragmatic leader. This viewpoint also has the fact that Duda is “not a militaristic politician like Lech Kaczynski”.

Well, wait and see. So far, one thing is clear: Duda, with no less passion, is ready to fight off the forces of the Polish army and NATO from the Bandera radicals, than from the "threatening" Russians.

Observed and commented on Oleg Chuvakin
- especially for topwar.ru
Ctrl Enter
Noticed oshЫbku Highlight text and press. Ctrl + Enter
We are
Earthly forces, heavenly problemsUnder whose tune dancing Duda
17 comments
Information
Dear reader, to leave comments on the publication, you must to register.