China is approaching the currency basket

August 18 2015
50
August is the time of financial crises. The Russians remember, for example, the "default" 17 of August 1998. August 2015 of the year is also not the best month for the ruble: the national currency is rapidly losing weight. From the beginning of July to August 11, his rate, as analysts of Kommersant noted, fell by 15%. This was promoted by the excitement of speculators who discovered two reasons for the game to fall: the unexpected decision of the Chinese Central Bank to reduce the yuan and the fall in oil prices (August 11 fell by 2,4%). As a result, the Chinese decision with a simultaneous fall in world oil prices hit the Russian ruble slightly. 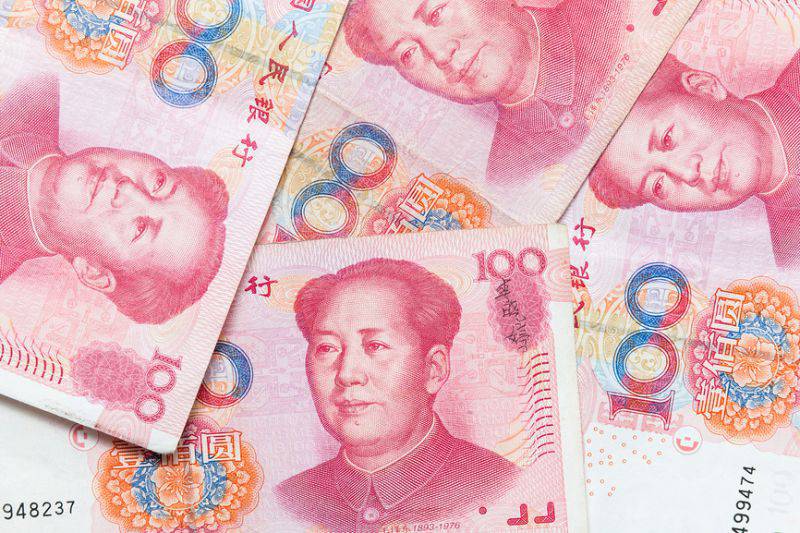 August 11 The People's Bank of China lowered the so-called average yuan rate by 1,86% against the dollar, writes RBC. The Chinese authorities announced a “one-time correction” rate, however, 12 and 13 in August, the yuan rate was further lowered by 1,62 and 1,12%, respectively (to 6,4 yuan for a dollar, which is the minimum since July 2011).

From the beginning of July to 11 August 2015, the ruble exchange rate fell by 15%, notes Kommersant. Speculators were 11 and 12 in August, their games against the ruble, referring to an unexpected decision of the Chinese Central Bank to reduce the yuan. In addition to the yuan, speculators pointed to a drop in oil prices (August 11 fell by 2,4% to $ 49,18 per barrel).

Newspaper RBC notes that the decline of the yuan by 1,86% is an unprecedented step, because this year the changes in the daily “average rate” did not exceed 0,16%. In addition, such a change in the course is the largest movement of the yuan over the past twenty years, not caused (at first glance) by institutional changes. The last major changes in the exchange rate were explained: in January 1994, the rate was changed to 33% due to the merger of divided currency markets, and in July 2005, the yuan fell by 2,1% due to the change of the regime from fixed to the dollar to “conditionally floating” in relation to the basket of currencies of China’s trading partners. And from that day on, the daily limit of the yuan / dollar exchange rate appeared.

RBC claims that the Central Bank of China has actually changed its approach to exchange rate setting. Previously, the “average rate” was determined by a secret rule that linked the yuan to the currencies of trading partners, and the dependence was not known to the market, now the People's Bank claims that the “average rate” will be oriented, among other things, to the market rate of the previous day.

The actions of the Chinese National Bank led to a decline in the currencies of Asian countries. You need to know that from July 2014 to June 2015, the real RMB exchange rate against the PRC basket of trading partners strengthened by 13%, which reduced the availability of Chinese goods against the background of the increased competitiveness of other Asian manufacturers, which lowered their currencies against the dollar. RBC believes that the devaluation that has occurred is only a small correction to the prices of Asian partners. Interest therefore represents further movement of the course. Course game may lead to the acceleration of the still slowing Chinese economy.

The Chinese authorities have another task: the inclusion of the yuan in the currency basket to calculate the special drawing rights of the IMF. And for this, it is desirable, notes "RBC" that the exchange rate is determined by market pricing. And here it is important that the devaluation undertaken just leads to the side of the market rate. The decision on the structure of the basket is reviewed every five years, and the issue with the yuan will be decided in November.

Economists tend to believe that the three-day devaluation of the yuan will not stop.

How will the fall of the Chinese currency affect Russia? In the medium term, indicates RBC, the market exchange rate of the yuan will increase the likelihood of its inclusion in the IMF currency basket. As a result, the Central Bank of the Russian Federation will be able to use it as a reserve currency, and this will lead to a further increase in trade between the two countries.

It is interesting here and something else, add on my own.

First, the government is hardly going to stick to a “market” course. This game is only for the IMF. The course will continue to be regulated by bureaucrats. After all, on the fourth day of the games, the National Bank of China raised the yuan rate to the dollar by 0,05%. These are sheer trifles, but it can be concluded: Beijing has set a lower bound for the fall of the course.

Secondly, by cheapening its own currency against the dollar, the cunning government of the Celestial Empire clearly made some strategic decision. After all, now all the goods, the price of which is expressed in dollars, will cost China more expensive in yuan. First of all, we must, of course, talk about oil. And here the most suitable moment was chosen: because of the expected entry into the Iranian market, oil prices are falling, and China can afford to play with the currency.

Thirdly, this game will really allow China to artificially stimulate fading exports: after all, last July it fell by 8,3%. The reason for such a marked decline was the decline in demand for Chinese goods in the United States, Japan, and the countries of the European Union. Now, exporters will receive more yuan for their dollars than before; in addition, in dollars these goods will become more accessible for end users. True, the stick in the wheels of the Chinese can insert Asian competitors, also constantly playing with the rates of their currencies.

There are also the fourth.

“In Europe and Japan, the homeland of reserve currencies, quantitative easing and other factors led to the cheapening of the euro and yen. The euro has fallen by one-third since the start of 2014, about a third yen. Yuan, meanwhile, remained stable against the dollar, which led to the fact that the exchange rate of the yuan sharply lost its competitiveness against the currencies of its trading partners, ”the newspaper said. "Sight" opinion of experts of the American center "Stratfor". This fact also had a negative effect on China’s trade balance, its macroeconomic indicators. "China clearly makes it clear that it will not move in step with the States and allow its currency to trade lower if necessary," analysts say.

Financial analyst of FxPro, Alexander Kuptschievich, does not think that the PRC authorities will allow a sharp drop in the yuan's exchange rate: “The Yuan was only slightly released to float freely. For two days, the rate of the Chinese currency fell at some point by 6%, and now it is at 3,5% below Monday levels. By the standards of other currencies, the movement is trivial. Talking about some of the consequences for the economy can be possible only after fluctuations in 10-15%. I think that the yuan will continue to be more flexible, that is, not so strongly tied to the dollar, respectively, when the yuan falls, Chinese goods will become cheaper (in dollars). ”

What can we expect against the background of falling rates of the yuan and the ruble, as well as oil prices in Russia?

Kuptskevich predicts that the fall in oil prices and the rate are far from complete. “... In the course of this fall,” the analyst says, “oil can fall by half from the highs of June, that is, into the 25 area amid an oversupply of oil and a slowdown in global demand growth. The market usually goes too far, and only then settles on adequate levels. For oil, this mark seems to me on 40 for “Brent”, for the dollar / ruble pair - on 75. But before that, we can see a deeper retreat, during which a dollar can cost more than 80 for a while. ”

What do the experts think about the devaluation of the yuan and its reflection on the Russian economy?

“The devaluation expands China’s export opportunities, primarily to the United States,” said "Free Press" Andrei Ostrovsky, Deputy Director of the Institute of Far Eastern Studies of the Russian Academy of Sciences; Head of the Center for Economic and Social Research of China. “The idea is simple: the lower the yuan rate, the greater the volume of exports from the Middle Kingdom.” As for the situation in the Russian economy, the decision of the People’s Bank of China “does not have a tangible impact,” the expert believes. “The fact is,” he notes, “that the ruble is getting cheaper much faster than the yuan. Because of this, Russia is in any case unprofitable to import anything from China. ”

There is, however, a different opinion. "For Russia, the devaluation of the yuan is not too good news- Nikita Maslennikov, head of the Finance and Economics department at the Institute of Contemporary Development, told the publication. “The devaluation of the Chinese currency does not, at a minimum, improve our trading position with respect to the Middle Kingdom.”

According to the expert, the problem is that since the beginning of 2015, Russia has lost about a third of its turnover due to falling oil prices, a slowdown in the Chinese economy and a decline in global demand for crude oil. The result: the trade balance of the Russian Federation with China is negative. Reducing the value of the yuan means a premium for Chinese exporters. And if Chinese exports increase slightly due to devaluation, this will further worsen the balance of trade of the Russian Federation with the PRC.

According to the expert, China will try to reach the stated GDP growth in 7%, primarily for the sake of maintaining political reputation. But what next? The analyst assumes that growth due to devaluation will lead to overheating of the economy, which will give rise to even greater problems in the coming years. As for Russia, it’s 7% growth of the Chinese economy “do not make the weather,” the expert said. In fact, this is the 2014 indicator of the year, and today the situation in the oil market is much more complicated. As a result, the rise of the economy in China is unlikely to raise the price of "black gold".

As a result, we will add in conclusion, China will be able to solve three problems with the help of devaluation: by weakening the yuan, increase exports, press competitors, and at the same time declare market pricing, which fully complies with the IMF's guidelines. Beijing’s main goal is to introduce the yuan into the currency basket from January 1 2016. The relevant decision will be made in November.

Why did the decision of the Chinese National Bank turn out to be a surprise for the whole world, even for hard-boiled currency speculators? Very simple: the Chinese do not chat, but do.

Ctrl Enter
Noticed oshЫbku Highlight text and press. Ctrl + Enter
We are
Strangulation: the context, conduct and consequences of the American naval blockade of ChinaPreliminary evaluation of the prototype of the unobtrusive Chinese fighter Chengdu J-XX [J-20]
Military Reviewin Yandex News
Military Reviewin Google News
50 comments
Information
Dear reader, to leave comments on the publication, you must to register.