"Valkyrie", blow up the wolf's lair 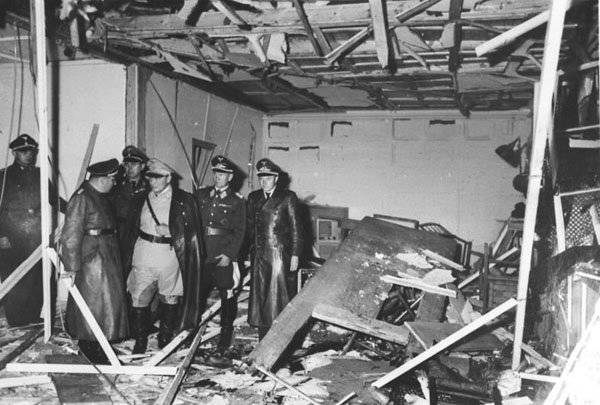 The most famous assassination attempt on Adolf Hitler took place on July 20 1944. The rebels planted a bomb in the room where the Fuhrer held a meeting. There were killed and wounded, but Hitler was not injured.

According to the ancient Scandinavian and German myths, the daughter of a merited warrior or king (Prince) named Valkyrie on a winged horse flies over the battlefield, picks up the dead warriors to take them to the heavenly home - Valhalla, where the brave fighters who gave their lives on the battlefield , feasting and having fun. Valkyrie during the battle decides the fate of each warrior.

It was with the name of this beautiful mythical heroine was associated with a cunning plan to destroy Adolf Hitler.

But first let us dwell on the events preceding the implementation of Operation Valkyrie.

Newsreels of those years show the general approval by the Germans of the coming to power of Adolf Hitler in the 1933 year. But the new regime had enough opponents among the leaders of the church, the political and military elite of pre-war Germany. Many diplomats, politicians and the military understood that Hitler would plunge the country into a war, the result of which could be the complete destruction of Germany itself. The plans of the opposition was the overthrow of Hitler and his trial.

Among the groups of conspirators who do not support the actions of the authorities of Nazi Germany are the following.

The first group included aristocrats of the German society (Hassel, Jessen, Popitz, Gerdeler, and others). This group had the support of virtually every civilian and military imperial department.

The second group consisted of political minded people. It included young aristocrats. One leader of this group, Count Helmut Moltke, served as expert of the General Staff and military intelligence. Group member von Wartenburg served in the military-economic unit. The members of the group were the adjutants of the commanders who were associated with the headquarters of various branches of the military, the police and the Gestapo.

- General Ludwig Beck was one of the officers close to Hitler - it was he who the Führer ordered to restore the military potential of the country, he had support in almost all levels of the military apparatus;
- General Olbricht, Head of the Ground Forces Directorate;
- General Treskov held the position of head of the “Center” group of the Eastern Front;
- Admiral Canaris was the head of military intelligence and counterintelligence;
- General Oster - Chief of Staff Canaris.

The country was experiencing a period of terror and total surveillance of dissidents. Many members of the opposition tried to find support for their plans in England and France, and the clergy repeatedly turned for help in negotiating with the hierarchs of the church.

The result of these attempts were the statements of British officials, the essence of which boiled down to one thing - the British are ready to negotiate only if Hitler is removed from power. There was another reason that Britain was in no hurry to support the opposition of the Nazi regime - in 1939, they needed an aggressor, with whom they hoped to reach an agreement, i.e. They needed Hitler. And this was confirmed by the Munich Agreement in 1938, where the Prime Ministers of France, England, Italy and the German Reich Chancellor Adolf Hitler signed an agreement on the transfer of the Sudetenland to Germany, which belonged to Czechoslovakia. And also in September of this year, Germany signed declarations on mutual non-aggression with Great Britain, and then with France.

Before the war, there was no question of the physical destruction of Hitler. The opposition tried by legal means to fight the regime, which by thousands destroyed people in camps and prisons, executed dissidents, instilled fear among the citizens of their country, encouraged scammers and traitors.

In the 1943 year, when it became clear to many that the war was approaching the borders of Germany itself and that the peoples of the countries on whose territory German troops fought would never forgive their atrocities, the conspirators decided to kill Hitler. By this they decided to prove that not all Germans are fascists, and also to get a chance to conclude agreements with England and the United States, not allowing the Russians to enter Germany.

One of the attempts to kill Hitler was undertaken by General Hening von Treskov. He organized the delivery of a bomb disguised as a bottle of brandy on board the plane on which Hitler returned after visiting military units operating in Russia. But the fuse did not work, and the plane landed safely.

Another of the conspirators - Baron von Gersdorf - tried to blow up Hitler along with him at the exhibition of military trophies, but the Fuhrer left there before the scheduled time of the bomb, and the failed martyr was forced to immediately demine himself.

The military command of Germany prepared a plan codenamed “Valkyrie”, providing for the action of the reserve army in the event of internal unrest in the country. The reserve army consisted of more than two million people, and its task, according to the plan "Valkyrie", was to ensure the security of strategically important facilities and the construction of military, transport and economic purposes, communication lines, as well as the destruction of the enemy. The conspirators decided to take advantage of this plan. Having developed a number of additional orders, they planned to use the units on alert for carrying out a coup d'état and overthrowing the fascist dictatorship.

Hitler and General Fromm (commander of the reserve army) could give a signal to the beginning of the implementation of the Valkyrie plan.

Reich security service arrested many conspirators in January 1944, including Helmut von Moltke. This event accelerated the implementation of the plans of the conspirators to destroy Hitler. 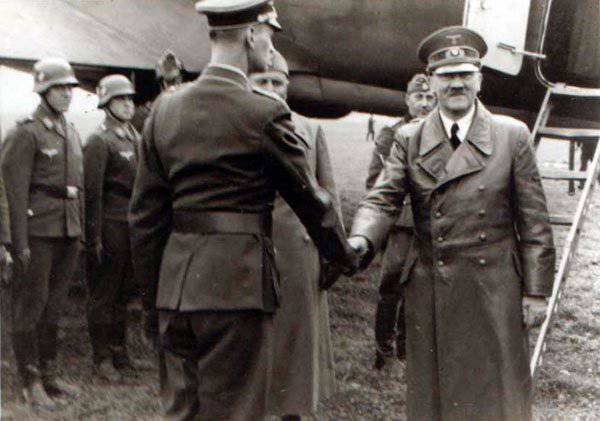 Hitler often changed his plans at the last moment, because of this several attempts to kill him failed. The most faithful, as it seemed, was to blow it up either during the flight or in the Wolf's Lair. The rebels tried to implement both options.

Saving his friends, Colonel Klaus von Stauffenberg decided to independently carry out the elimination of the Fuhrer. It must be said that Stauffenberg was a very interesting and ambiguous person. He possessed outstanding business and personal qualities, broad knowledge and a high level of education. Even in 1942, he said that the war with Russia could not be won even under the most capable leadership, and, therefore, this war is a crime that does not make sense.

Stauffenberg, having received the post of chief of staff of the reserve troops, could attend the meetings held by Hitler. 20 July 1944, he received an order to arrive at the rate of Hitler and report on the state of affairs in the reserve army. On the report, Stauffenberg appeared with a briefcase in which, apart from documents, there were two bombs. Since the bunker was hot, the meeting was moved to an open area, which caused a decrease in the force of the blast wave. In addition, only one fuse was activated. And although Stauffenberg managed to put the briefcase at the very feet of Hitler, Colonel Brandt, who had previously participated in the attempted assassination of Hitler, accidentally, wanting to get closer to the map, moved the briefcase to the leg of the table. After a few seconds, the briefcase exploded. As a result of the explosion, the table was torn to pieces, part of the ceiling collapsed, window frames were disfigured, and one of the officers present was thrown into the street by a blast wave. But they all saw how, covered in a rye, in a tattered uniform, leaning on Keitel’s hand, to the bunker, crouching on his wounded leg, hobbled alive and practically unharmed by the Fuhrer. After examining the doctor, it turned out that Hitler suffered a leg burn, slight damage to his eardrums, and partial paralysis of his right hand. The massive part of the table and its heavy lid softened the blow, which saved the life of the Fuhrer. Recovering from the shock, Hitler began to prepare for the previously scheduled visit of Mussolini.

Meanwhile, Stauffenberg, after leaving the room where the meeting was going, confident of the death of Hitler, began to implement the plan "Valkyrie". The mistake of the conspirators was in the absence of the human factor in the operations of this level. Firstly, General Fromm, fearing responsibility, withdrew from announcing the start of the Valkyrie plan, and secondly, the main part of the reserve army did not know about the true plans of his command. This ignorance led to the fact that sent to arrest Goebbels Major Remer realized that he unwittingly became a coup, and realizing this from a conversation with the Minister of Propaganda, he went to destroy the conspirators already in the rank of colonel. The detachment of Remer seized the headquarters of the reserve army, arresting all the conspirators. General Fromm, frightened that the officers-conspirators will tell about his role in the implementation of their plans, ordered Remuer to immediately shoot all. But this did not save Fromm - he was subjected to a terrible execution along with the remaining living conspirators. The punishment was so sophisticated and terrible that the operator who shot it went crazy.

The end of the third Reich came in the 10 months.

The attempted coup d'état in 1944 was not only hopeless, but also meaningless, as the turning point came in the military confrontation between Germany and the anti-Hitler coalition in favor of the latter. Hitler's death was irrelevant for subsequent events. Russia's victory in this hardest war has already been predetermined.

We are in Yandex Zen
Tactics of the Afghan insurgents
The most famous attempt on Adolf Hitler
2 comments
Information
Dear reader, to leave comments on the publication, you must to register.