July 30 2015
77
For several years, the US Army has been developing and testing a new type of Heads-Up military helmet (electrified helmet with a display system). The aim of the study was also to significantly improve the ballistic protection of the face and eyes.
What are the results? 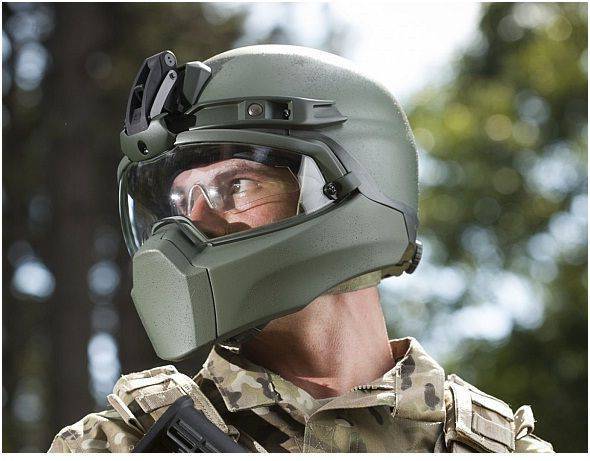 Photo: It is possible to shape the future US military helmet / US Navy Research Laboratory

American soldiers who had head injuries in recent military conflicts had face injuries in 72% of cases. Perhaps this is due to an increase in the number of attacks using improvised explosive devices (IEDs), from which soldiers were injured due to the shock wave, shrapnel and thermal effects of the explosion.

The US Army and the Marine Corps have expressed interest in developing a new helmet that can protect soldiers from these threats. Within the framework of the “Heads-Up” program, the troops for several years tested a new helmet with a removable visor and protection of the jaw.

According to a report from the NATIC Army Research Center, this program tested new ballistic materials and optimized hearing protection. Work was also carried out on the integration of communication devices and image processing (collimator indicators) into the helmet. 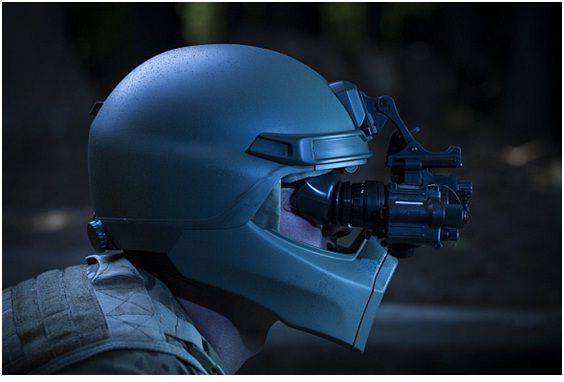 Helmet testing was conducted during routine training. “We were able to integrate our helmet into the main training processes and then get feedback from the soldiers,” said Donald R., Heads-Up project manager. “It was quite amazing, but almost every soldier from whom we received an answer was more than satisfied with the new equipment.”

The soldiers assessed, among other things, protection against environmental factors, such as adverse weather conditions, dust or stone fragments.

The main task of the helmet, and especially the front part, to protect the soldier from ballistic threats - splinters, a blast wave and thermal radiation emanating from an explosion of improvised explosive devices, mines, mortar shells, etc.

Heads-Up helmet cannot protect against rifle bullets, but is effective against shell fragments and pistol bullets of up to 9 mm.

With the shock wave to fight much more difficult.

The wave from the explosion flows over the bottom edge of the helmet and penetrates between the head and the helmet. Tests have shown that part of the wave energy is extinguished, but, nevertheless, part of the effect on the soldier's face.

“The addition of face and jaw protection prevents the direct impact of a shock wave on the head. And although it breaks along the bottom edge and hits the face, the protection significantly reduces the pressure on the forehead and eyes, ”says Dr. David Motta, a representative of the US Navy research laboratories, who also participated in the research.

The complexity of the study was not only a large number of alternative designs of the helmet. The results depended strongly on the power of the explosive device and the distance to the explosion, on how the body and head of the soldier were located in relation to the explosion, etc. 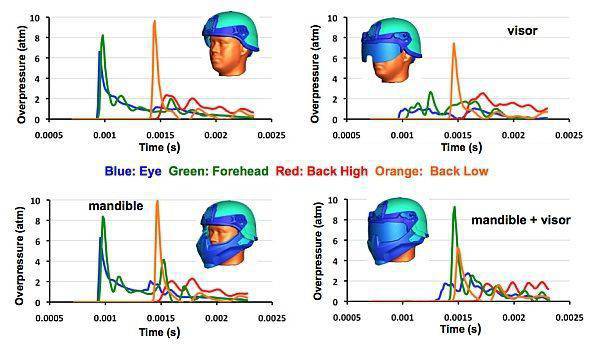 This graph shows pressure versus time for individual parts of the head during one of the tests. It is seen that not always a greater number of protective elements leads to the desired result. The blue graph shows the change in pressure on the eyes; green - on the face; red - on the back of the head; orange - on the neck (data from the Research Laboratory of the US Navy).

“When you add additional pieces of equipment, you won’t get what you expect,” says Mott. “Due to the presence of the inner lining or the inner lining, the waves can be reflected, interacting with each other, and increase the pressure on the head.”

It is worth noting that the program Heads-Up has ambitions to develop a universal helmet not only for infantrymen, but also for the crews of armored vehicles.