July 21 2015
21
In the Ukrainian reality, the phrase “Third Maidan” began to slip more often (would it also lead to the likeness of the Third Reich? ..). We are talking about growing dissatisfaction with the actions (or inaction) of the authorities, not so much among the population of the country, who, like during the last “Maidan”, will only be used, but among the radical elements of Ukraine, including those who jumped with placards in their hands or threw the "militia cocktails" at the last "gatherings of democracy" in the center of Kiev. About the high probability of another change of power, said the other day the leader Pravosekov Yarosh. 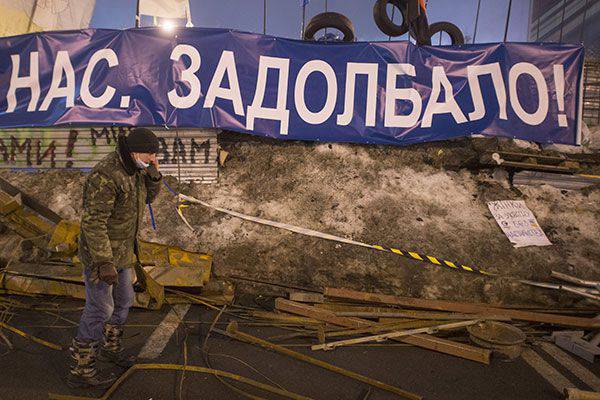 There are those who, having fully tasted the charms of the new Ukrainian government and the work of the Ukrainian special services, from among the ardent supporters of Maidan, even decide to appeal to the authorities of Russia. One of such individuals is Yevgeny Dovlatov, known in Ukraine not only by the hot support of Maidan-2014, but also by the outrageous antics with blood- “paint” on his body, “protest” lying on the stones and calls for Poroshenko to sell “Roshen” in order to pay off debts countries, without bringing matters to default. A large report on the unexpected change of views of this gentleman publishes Lenta.ru.

The essence of the material is that Mr. Dovlatov, who then tried to join Femen, then fought against the sale of psychotropic substances in Ukrainian pharmacies, now suddenly asks Vladimir Putin for forgiveness. It turns out that Dovlatov came to such a step after the SSU officers “had a close talk” with him, putting the charge against him “in support of separatism” and complicity in the creation of the so-called “Narodnaya Rada of Nikolayev”. After staying in the dungeons of the SBU, an ardent supporter of Maidan-2014 began to declare that Russia is largely right, calling the methods of the Ukrainian authorities fascist, and that Putin needs to apologize for the errors of Ukrainians.

What is it that turns out? .. And Putin is also behind the SBU? .. After all, after meeting with the staff of this structure, Dovlatov drastically changed his opinion.