Scary faces of the future

July 15 2015
66
About a year ago, I was forecasting the development of the situation in Ukraine and the impact on the Russian Federation. It was painted in the words most accessible to the general public and did not pretend to complete the analysis. Rather, it described the things trivial and obvious to any sensible person. The laws of social development are always the same, we are talking about a great global power or a desert bantustan forgotten by all gods. Today we are forced to focus on the current external and internal situation, and not the one that was a year ago. Since then, the situation has seriously changed, and not in our favor. 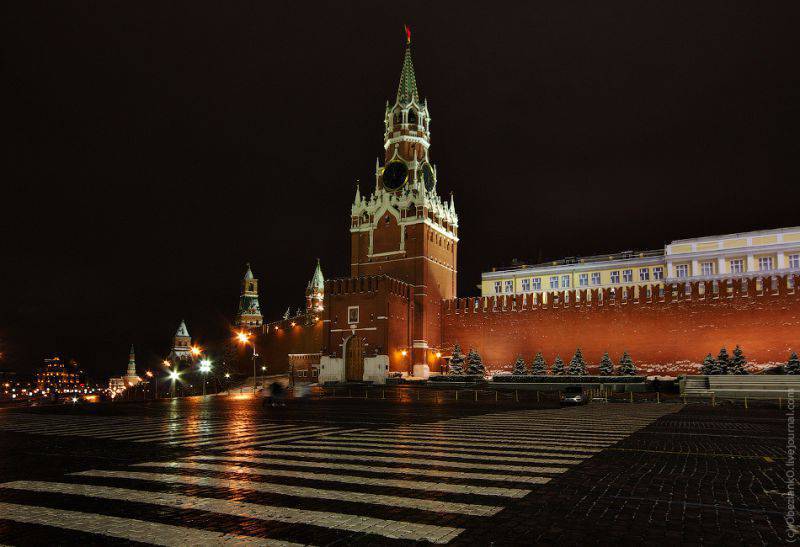 The forecast below sets out four possible course of events, where Ukrainian events are already important, but only a secondary front. The time period is by default one and a half to two, for a maximum of three years. One scenario is unambiguously positive for our country, two are conditionally neutral, with the possibility of transition to more optimistic and pessimistic scenarios, one is unambiguously negative.

Perspective one. It can be called optimistic. It provides for the successful withdrawal of Russia from the economic blockade and the political crisis with the least losses. Its implementation depends on a whole chain of factors, starting from the mistakes of the opponents, ending with a successful coincidence of circumstances. In the absence of a coherent foreign policy strategy, you will have to rely on them.

The long-running crisis in the European Union, caused by the flow of migrants and outright economic blackmail by the most willful member countries, should be the decisive moments playing for the “red ones”. Such problems will waste the already ambiguous unity of the European Union and make its position on Russia much more loose.

An additional scenario that plays into the hands of the Russian Federation may be the collapse of Ukraine. Not legal so far, but actual, as in Libya or Somalia. That is, a situation in which an “internationally recognized” government controls a certain small territory, and gangs, field commanders rule the rest of the country, and self-proclaimed states arise within the same village. The roll down to such a state can no longer serve as an adequate tool against Russia.

Another unpleasant surprise for the West could be a possible ISIS attack on the Gulf monarchies. Most likely, the preparation of such a campaign will take about a year, although it is not necessary to exclude an earlier speech. If Saudi Arabia falls, its neighbors will actually be doomed. The victories of the "Islamic State" in this field will cause a real shock in the European and American capitals, not to mention the oil prices soaring to madness.

The operation of even two or three of the listed opportunities will be for Russia a real strategic gift of fate. The incarnation of all at once can be considered the intervention of higher powers. However, miracles sometimes happen even in politics, especially if you push them a little bit.

With such a diverse range of troubles, Berlin and Washington will be forced to bow to Moscow and begin to lift the sanctions, because even they will not pull the confrontation on so many fronts.

According to the results of the bout, Russia and Putin personally will be perceived in the world as the victorious side, and the sequence of its actions as the highest political aerobatics that will be studied many decades later in the relevant institutions. The current president of the Russian Federation, without any problems, rules the country until 2018, and is re-elected for the next term.

Perspective Two. Stagnation. Everything remains as it is. The European Union and the United States somehow cope with internal problems. IG goes into a dull defense and does not create major problems for the West and the oil and gas monarchies. Poroshenko's regime in Ukraine only strengthened. Donbass in one way or another is returned to Ukraine. Possible, though not necessary, the assault of Transnistria by the Ukrainian-Moldovan troops.

In Russia, the socio-economic crisis is gaining momentum. The authorities are holding the situation in the country, but the shaft of accusations of top management is growing in surrender of foreign policy positions and mass impoverishment of citizens. This is not the most severe crisis that led to the collapse of the USSR, but the destructive direction to such an outcome is clearly indicated. There will be practically no adequate way out of the situation, and those half-open windows of opportunities that are still there will be completely closed. Even with this not very attractive scenario, there are serious chances to get out of the storm with a relatively whole state ship and with a bonus in the form of the Crimea. For this you need a set of measures, about which you need to write not even a separate article, but their cycle. But in big politics it does not happen easily.

Third perspective. It differs from the second scenario by the fact of a coup. There is a change of the first persons of the state, but at the same time the government is not lost (or is lost for a short period). That is, we face the Khrushchev road rather than the path of Gorbachev or Yanukovich. Power structures swear allegiance to the new leadership, the ruble exchange rate in the early days is reduced, but quickly returns to normal.

This scenario, of course, cannot be called neither bright, nor even more desirable. The very fact that the crisis has led to a coup already speaks of a dead end in the development of a state project. But there is definitely nothing catastrophic here. Moreover, there is a certain hope that the new faces will propose a different model for the development of the country, since the current model has certainly exhausted itself.

Analysts and political analysts single out conditionally two clans in the top leadership of the country that can claim full power: siloviki and liberals. Power resource against financial. In the context of specifically Russia, historically, it was power that was decisive, unlike the West, where financial resources meant a lot. So the author of this review would rather have put it on the security officials, although for sure nothing can be said. And we certainly cannot talk about what the policy of the new government will be, in particular, the fate of the Crimea. Here everything will depend on the specific clan, the personalities of the first persons and the internal and external political situation.

Another advantage of the siloviki over the liberals is that they have ideological freedom of choice. Depending on the situation, they can become nationalists, communists ... anyone. We recall, for example, the Iraqi military leaders who, after the collapse of Saddam Hussein, eventually changed their colors into ISIS Islamists, or former army and naval chiefs of the Reich that under the FRG became ardent adherents of democracy.

A liberal can only be a liberal. He is only capable of small (more ostentatious) movements within a narrow liberal model, risking to go beyond it, where he will cease to be a liberal. And it is precisely the liberal ideology that significantly limits the choice of means to achieve the goals, which, when confronted with a less discriminating and more decisive side, can become a determining factor. 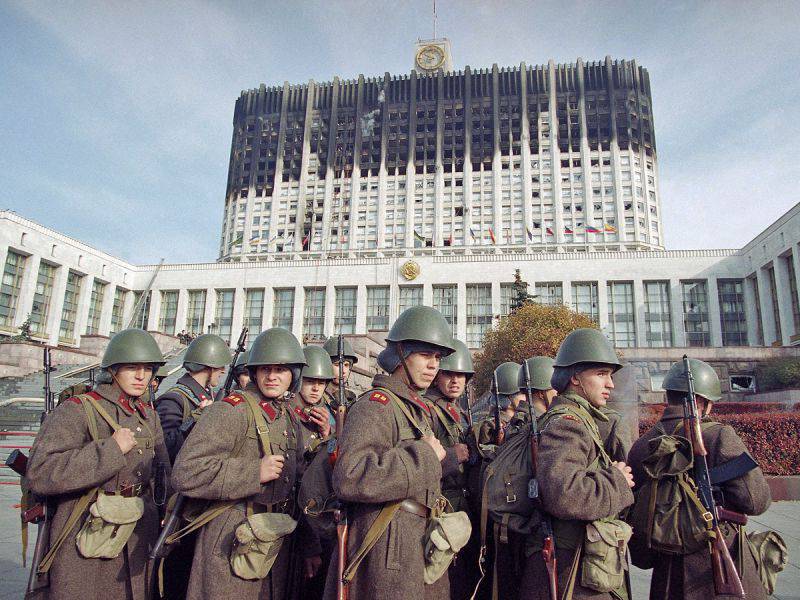 Fourth perspective. The most frightening. By analogy, this is the path of the collapse of the USSR or modern Ukraine. The coup is delayed and is accompanied by chaos and loss of control. Such an outcome is possible if, instead of establishing management and emergency creation of the current transitional model, the coup, regardless of clan affiliation, gets bogged down in the redistribution of power and the most delicious property. Having been deprived of the coordinating and stabilizing role of the Center, the regions are forced to independently steer the economic and then other activities. Sly to local authorities will be reassigned to the security forces, including the army; There will be its own financial system. Somewhere, without fanfare, something like this is already happening.

The final consequences for the country will be determined by the depth and duration of the paralysis of power. With obvious and complete discord, the intervention of external forces is almost inevitable, especially in peripheral isolated territories. Germany occupies Kaliningrad, Japan - the Southern Kuriles (in its full version - all of Sakhalin and all the Kuriles), Ukraine (if it persists by that time) will try to return the Crimea, and so on. The coalition will decide on a further invasion of continental Russia, only by being convinced of the complete impunity of such a campaign.

If Moscow is able to ultimately take control of the situation and prevent the country from spreading to parts, then by the end of the acute phase of the crisis it will find itself in a difficult geopolitical situation: the loss of a number of regions, strengthened neighbors across the continent and frustrated finances. In order to reassure readers, I want to immediately notice that the worst scenario is unlikely, if only because the collapse of the Soviet Union has already passed before the eyes of current generations, when everyone also wanted to change the stiffened party apparatus, and eventually collapsed the country. Therefore, the fifth, the darkest scenario is not here.

History unequivocally asserts that for Russia the betrayal of the privileged class is far worse than the most dangerous external enemy. Thus, the creation of an artificial food shortage, among other things, caused the February Revolution in Petrograd — despite the fact that thousands of food-carrying wagons were purposefully accumulated at access stations. Similarly, discontent was provoked in the USSR - in Moscow, Leningrad, Kiev and other major cities of the USSR in 1989-1991. Naturally, only people with serious power and influence, who could give the appropriate orders, could arrange this. We are talking about sabotage and sabotage on a particularly large scale - with many victims, we note. And it does not matter what goals each particular official was guided by: selfish - to cash in on the sale of the deficit, or political - to ride the wave of popular anger. The latter, by the way, is quite suitable for the definition of terrorism.

The revelation, condemnation by the open court and the public execution of such figures may well serve as an admonishing factor for all the others who were going to go the same way. Exceptional times require exceptional solutions, for which the descendants will say only thanks.

Another danger is that at the present moment too many players are interested in liquidating Russia; if not completely, then in its present boundaries for sure. Individually, each of these players is not particularly strong, but together they are capable of much. In addition, if earlier Moscow could play on their contradictions, now, on the other side, an anti-Russian consensus has been reached. To break it is an extremely difficult task, achieved through an incredibly subtle political game, multiplied by a favorable set of circumstances.

Russia is a strong and strong country with a large margin of safety. But this stock is not infinite. The question of the fate of the state for ordinary Russian people is a question not only of material well-being, but also of simple physical survival.