Elections in Belarus: three months before the apogee 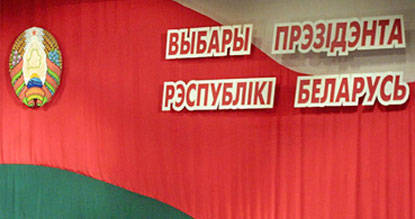 The second half of 2015 of the year begins, which promises us a lot of interesting events in the post-Soviet space. And in no case should we miss one of the most important, entailing irreversible consequences - the presidential elections in Belarus.

Belarus is one of those countries, which seem to be not so much to tell. Fraternal people with almost identical origins, clean streets of cities, stability, economic president Lukashenko ... And, meanwhile, since the beginning of the Ukrainian conflict in the Belarusian pool there has been a quiet, but unstoppable encroachment and even some trend towards radicalization, which is insignificant for the time being, but in the long term - dangerous .

Alexander Grigorievich Lukashenko is still the master of the country, its “father” and the main man. Today, his role, like the role of his country in the post-Soviet space, has been significantly deformed - from the eternal partner of Russia, from “Russians with a quality mark”, Belarusians suddenly turned into some kind of neutral mass with incomprehensible political ambitions of the leadership, who framed Poroshenko and expressed support for the junta . Many patriots suddenly ceased to respect Alexander Grigorievich himself, and even began to criticize - they say, this is not all fraternal.

Alas, Lukashenka is just a politician, albeit a very good one. And today it can be noted that the polarization of the Belarusian society, although it has not reached a critical point, has already begun and is actively going. First of all, the Nazi coup inspired the Belarusian nationalists with its example (yes, there are such). Many of them went to war in the Donbass - they did not return, frankly, not all, but they set a certain example of the public.

It is very important that all sorts of American organizations at different levels have stepped up their activities, and at the same time, criticism by American politicians of the "last dictator of Europe" is heard less and less in the news... As it was already mentioned, everything goes to the fact that they will try to make Yanukovych out of Lukashenka - to play a false scene with the allegedly maximum trust in the president, while cultivating a radical wing in the political arena of Belarus. The task, to put it mildly, is not an easy one, especially in comparison with Ukraine, which the same NGOs have been procrastinating for all 24 years of "independence". But what did the Western political strategists not achieve?

Unfortunately, if, of course, we do not know something, Lukashenko is acting rather recklessly. Statements about a possible threat from Russia - a country that subsidizes Belarusian enterprises and an agricultural complex, look not so strange - they generally enter into open discord with ideas about the odious, but Russia-friendly president. The same should be said about his contacts with Poroshenko - it would seem that Belarus should have supported the external course of the Russian Federation and at least did not recognize the junta during the same time and reduce the volume of trade with Ukraine. But this was not noticeable.

However, if you look at the situation from a different point of view, everything will become clearer. The Belarusian society, alas, is not so monolithic as it itself can think. Young people are largely infected by Western ideas, the Western way of life. But the students are the driving and most active part of the nation, which in other hands can bring innumerable misfortunes (Maidan as a vivid example). Overwhelmingly, adults are apolitical - they can go to the polls and vote, because everyone does it, but no more.

All these loud statements, all this public policy are flirting with a radical-minded part of society. And flirting is rather naive, since Lukashenko will never be his own for the so-called “zmagar” and other oppositionists. The main thing for him is to realize this fact in time.

And here another problem emerges - the absence of any vivid Russian national identity in the republic. The point is not that the authorities conditionally prohibited Russian marches or organizations like RNE. Rather, the connivance of those whose professional occupation is to shape pro-Russian sentiments in the post-Soviet republics plays a role. Can you tell right away how many Russians live in Belarus? Can you name the regions and places where they specifically live? Hardly - this information is not advertised. What can we say, if in principle there are not even significant Russian diasporas in the country! Yes, they speak and think in the same language, but the structure of society is different, self-consciousness is also different, but there is no passionary forces capable of turning it in the right direction.

A step away from instability

Before the upcoming elections, the IISEPS Research Center, which is considered both in the opposition and in pro-government circles relatively neutral, published quite interesting information about the mood of citizens. In particular, at the beginning of July, no more than 40 percent of voters are ready to vote for Lukashenko. This is a solid result, but not more than 79 and more than the percentages recorded by the electoral commission in 2010. Moreover, opposition candidates are gaining some popularity. Mikalai Statkevich (currently a prisoner convicted for conducting mass riots in the last election) has 5% support, although he is unlikely to be able to run for office and even get into candidates, as he is currently in prison. Other "grantoedy", Neklyaev and Lebedko, totally pull over almost 10% of the electorate.

Of course, the population supporting the opposition is in the minority and is represented, as a rule, by fairly marginal groups. But one cannot ignore the fact that even an active minority is capable of delivering big problems to the authorities. Many thousands have not yet decided who they will support and whom they will vote for. This is the same gray mass, which everyone can incline to their side. And do not underestimate the opposition - with the support of the West, they can even arrange their "Maidan" in Minsk, as they have already tried to do in 2010. Then the Old Man was the idol of all Russians, and he did not allow anyone to let anyone in. Today, he is already trying to “make friends” with the West and can miss the attack of an assertive predator.

Perhaps the main question is how much time the West has left to try to get rid of its enemies. It is much easier to find approaches to Russia, I have Belarusian territory at my side - the connecting link of the Russian Federation and Europe. Therefore, the Russian foreign policy bodies should remain vigilant and ... be ready to help Belarus with a difficult choice for it.