Yasinovataya: difficult history of one kindergarten 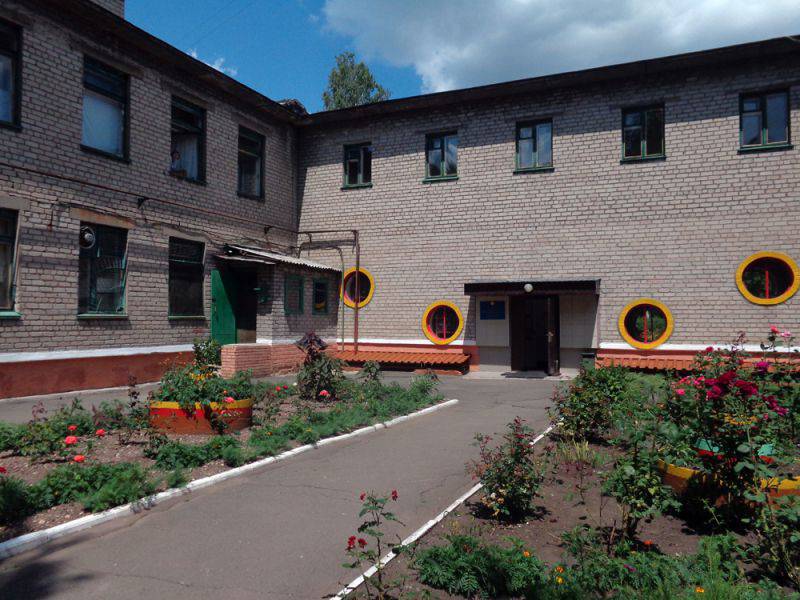 Sometimes, in order to feel the tragedy of the war, and at the same time to evaluate the actions of its parties, only one seemingly insignificant episode is needed. A bombed kindergarten, an injured residential building with civilians, a playground ruined by shells ...

Yasinovataya is a small cozy town in 24-s kilometers from Donetsk. Standard panel houses are interspersed with small private houses, and together they drown in dense greenery. Simply - one of the towns soaked in sweat and blood of Donbass land. Now, when the railway station in Donetsk is closed due to ukrobombezhek, Yasinovataya plays the role of a railway junction - from here trains go to Lugansk, as well as Ilovaisk and Debaltseve. More distant trains have long been forgotten here. 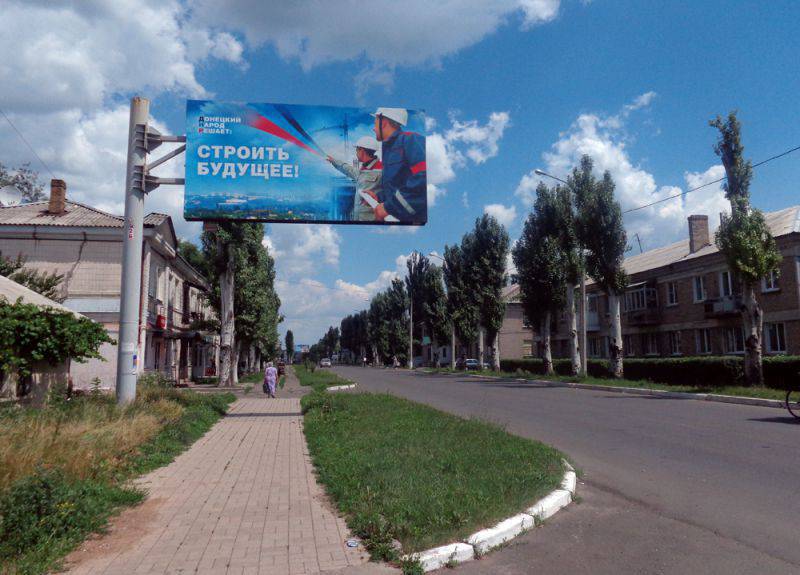 And yet - this small green town continues to be periodically subjected to shelling by the troops of the Kiev junta.

... Near the entrance to the kindergarten with the warm name "Sun" - the usual information boards, in which parents are warned against various dangers threatening children. But there are dangers from which the instructions will not help.

“The first time the kindergarten was fired on 2014 of the year in August,” say the staff, “we broke all the windows. We just managed to install new windows - and on the night of January 29, 2015 was fired again. Three projectiles landed in our yard.

Fortunately, there were no children in the garden during these punitive operations. The January bombardment was so strong that it destroyed the farm buildings and the boiler house, which supplied the institution with heat. The surviving pipe of the boiler room then had to be cut down, otherwise it could have fallen either on the garden or on residential buildings. The staff of the kindergarten, as they could, saved the property from the winter cold. 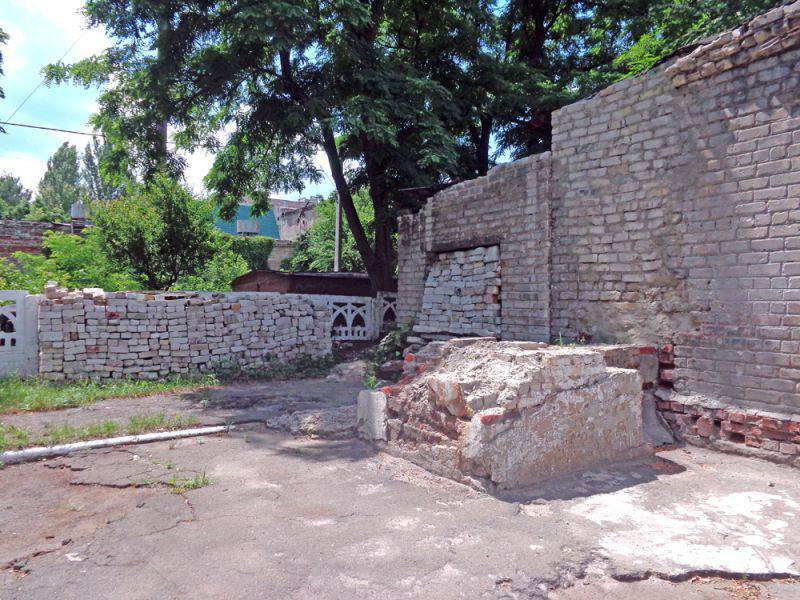 - You see, there - the fence had to be sealed with completely different material. All these facilities for children had to be re-installed. Volunteer group “Phoenix” helped us. And immediately after the shelling, everything was destroyed here, there was torn earth, ”says the head of the kindergarten. 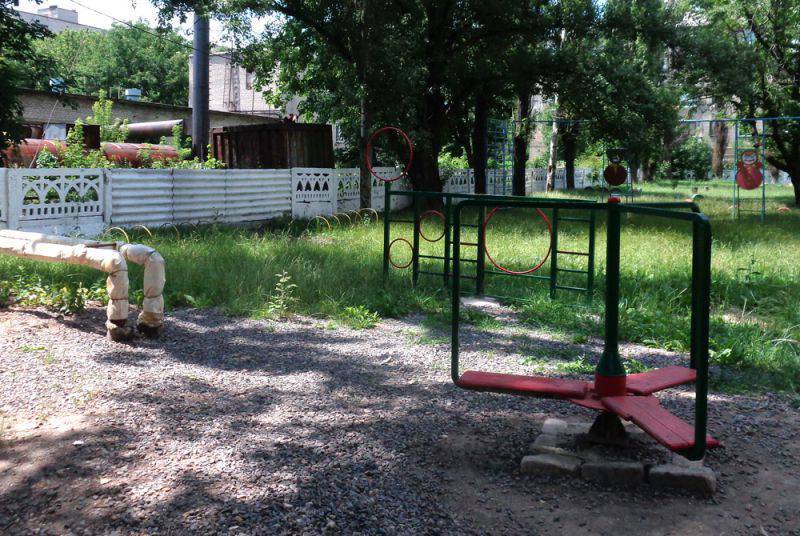 Helped everyone who could. Parents of children came to the restoration work. Construction company "Universal" restored 600 square. meters of glass. The head of the administration of the city Yasinovataya promptly allocated plastic wrap to close the broken windows.

Some of the windows have not yet been restored. But the garden, nevertheless, works, accepts small inhabitants. 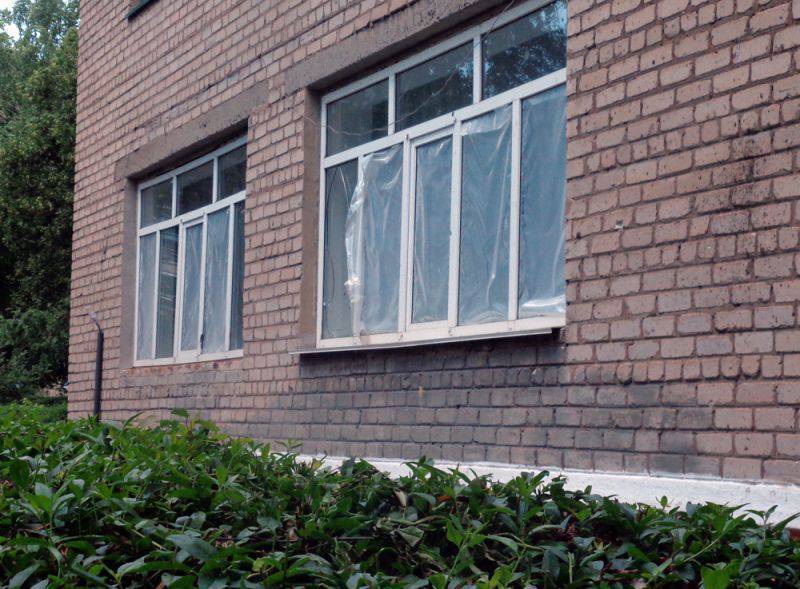 “All our staff showed themselves worthily,” says the head, “women went to work in any conditions. And over there, in a pink dress, with a pram - our teacher, she recently became a mother. 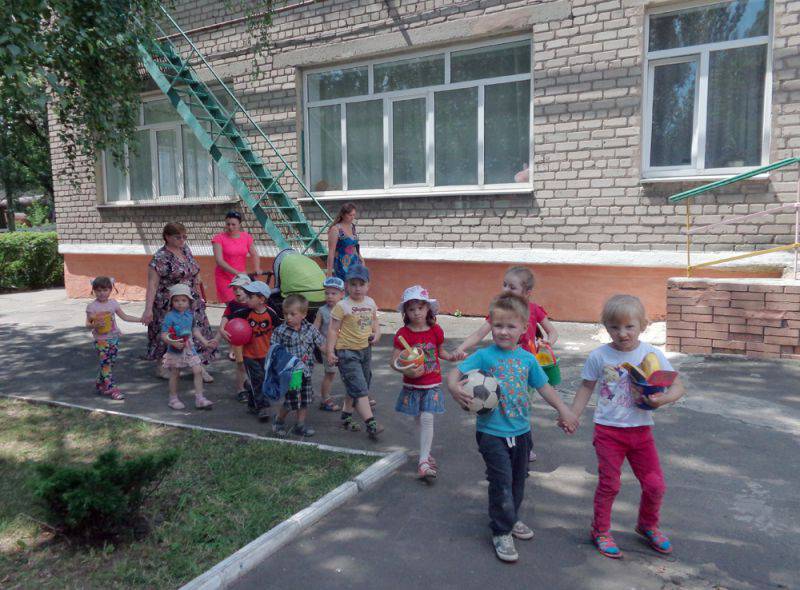 “Now,” she said, “I will show the tree in our yard, which is all shattered.” We tried to cut it - it did not work, the saw broke - there, inside, a solid metal. And in general, we had to re-plant all the flowers in the flower beds. Here, they already bloom with might and main. 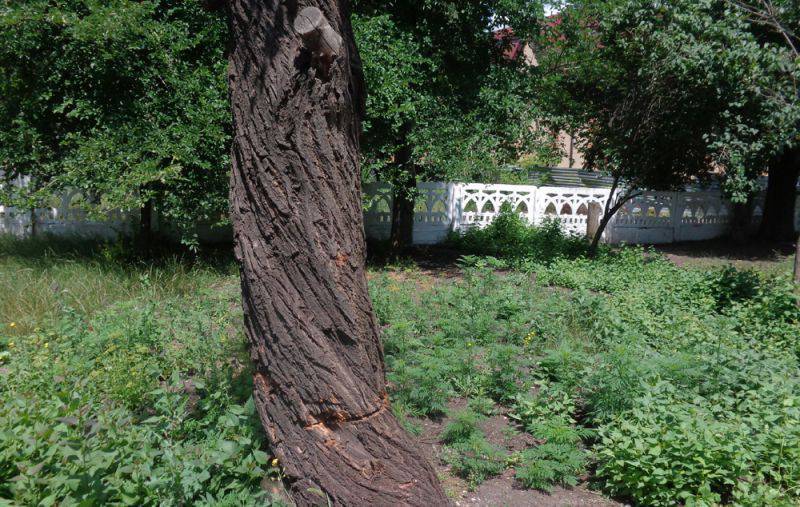 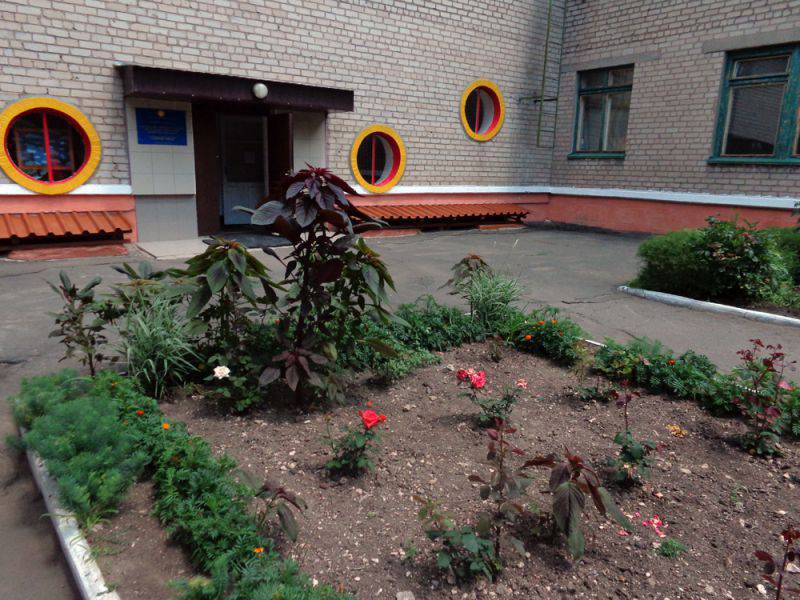 We go inside. Everything is clean and tidy. In order to bring the premises into proper form after the incident, a lot of work was invested. However, in some places the gaze snatches some “irregularities” on the wall - these are smeared traces of destruction. 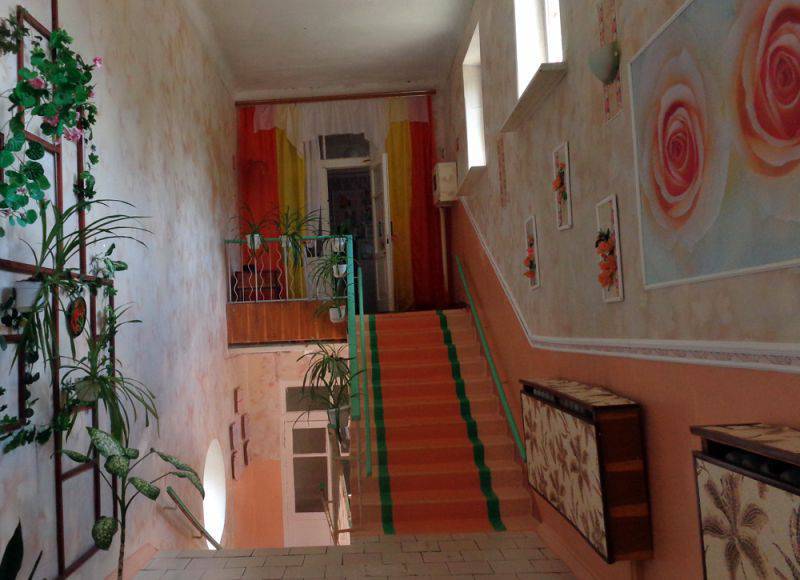 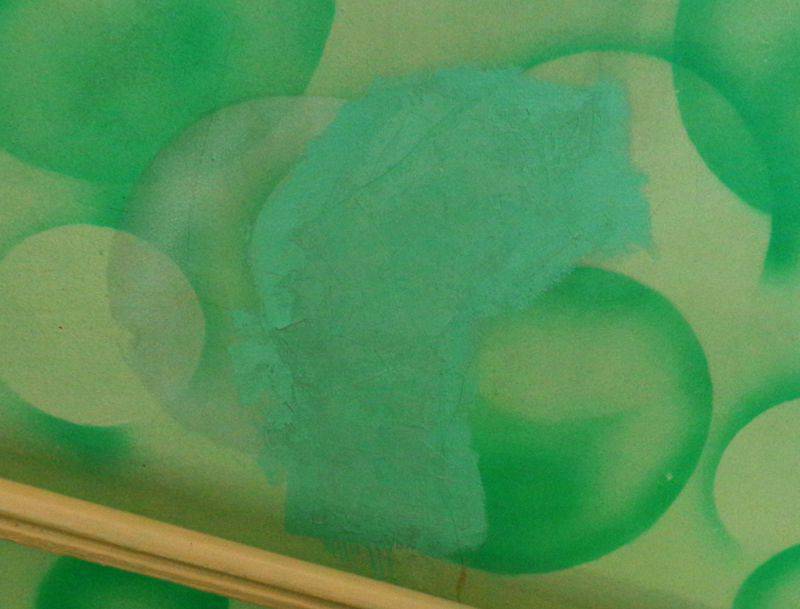 Restoration work in the kindergarten "Sun" continues, in particular - in the music room. 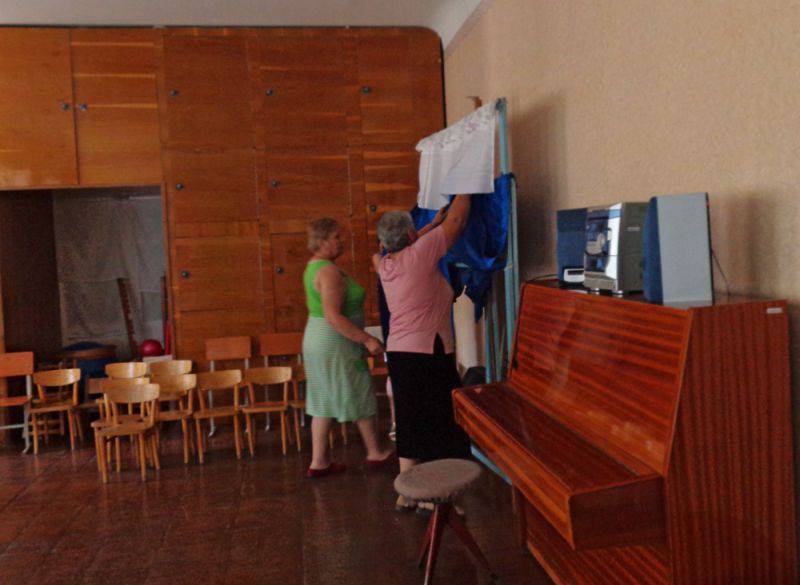 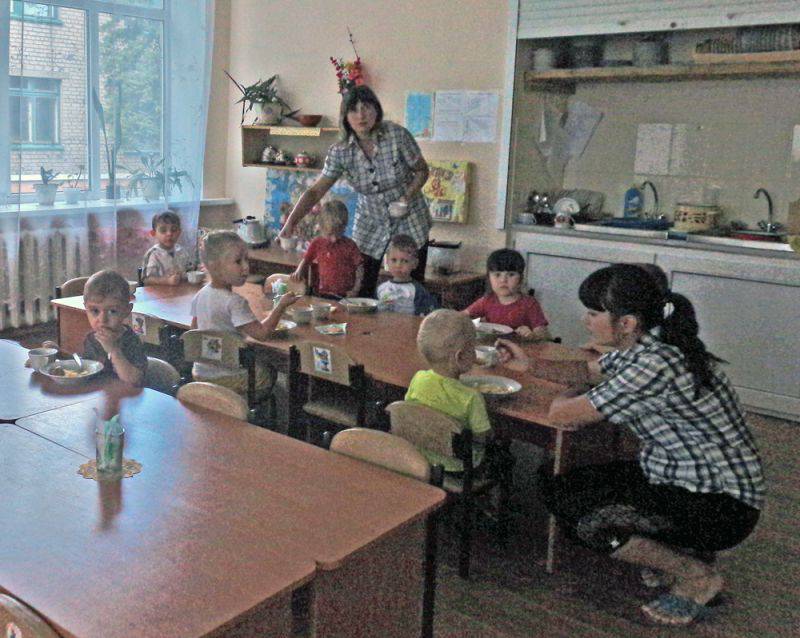 And here, in this lovely bedroom, where the dolls are sitting on neatly made beds, - probably, according to “dill”, there was “the main nest of terrorists”. Although the bedroom has been restored, there are small holes from the fragments in the walls, as a sad reminder of the war. 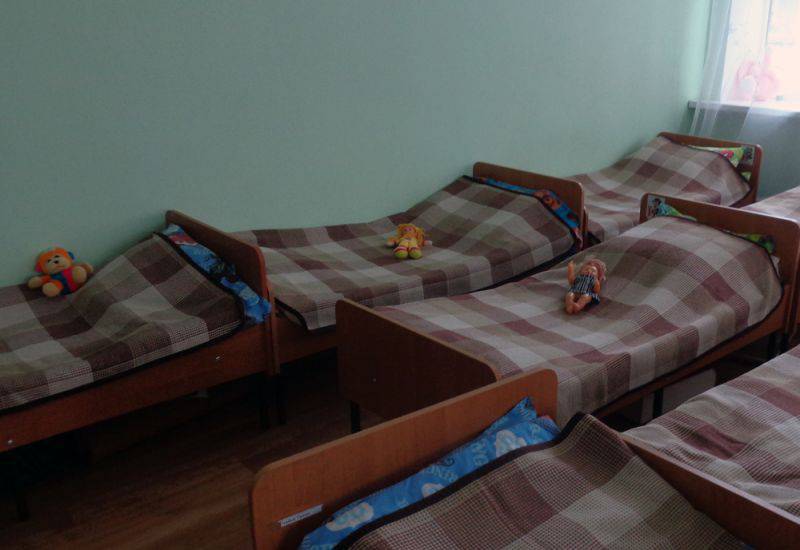 They suffered from artudars and neighboring houses with kindergarten. Many window openings are covered with foil. 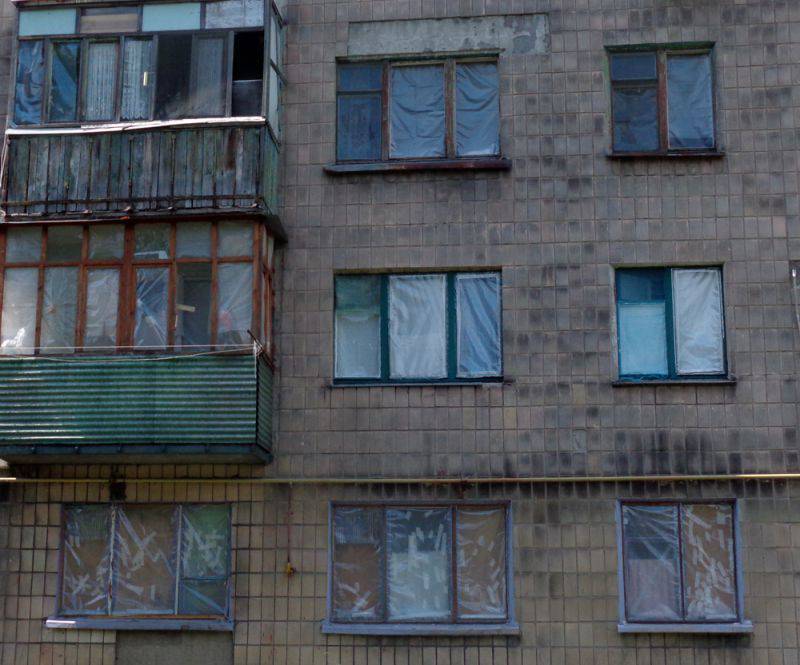 - People are afraid to restore the glass here. In August, after the first bombardment, they inserted new ones, - and at the end of January there was again a bombing, and again there were no glasses. A pleasure is not cheap. 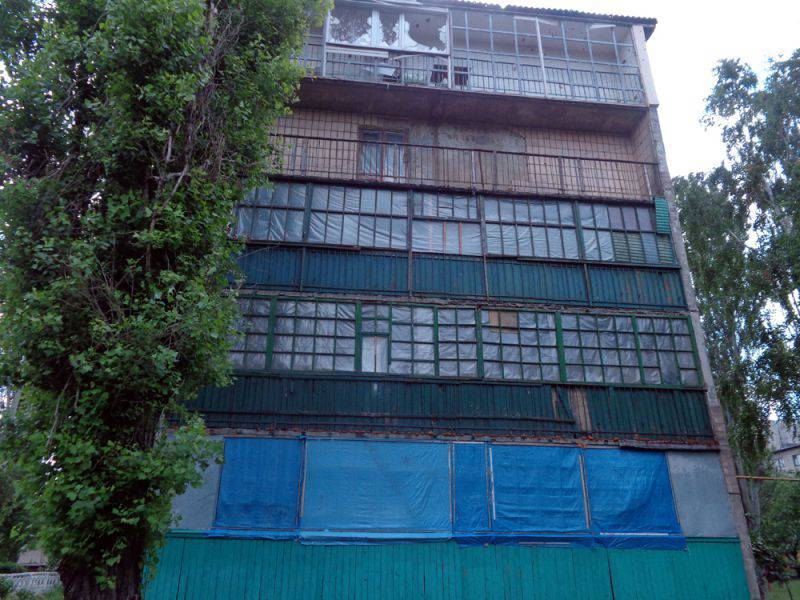 From the actions of ukrovoyak suffer not only children, but also deep old people. In one of the apartments lived ninety grandmother. From the August blows she killed the cat. And during the January shelling, she was flooded with broken glasses. Fortunately, she survived. Relatives had to take her to Russia. 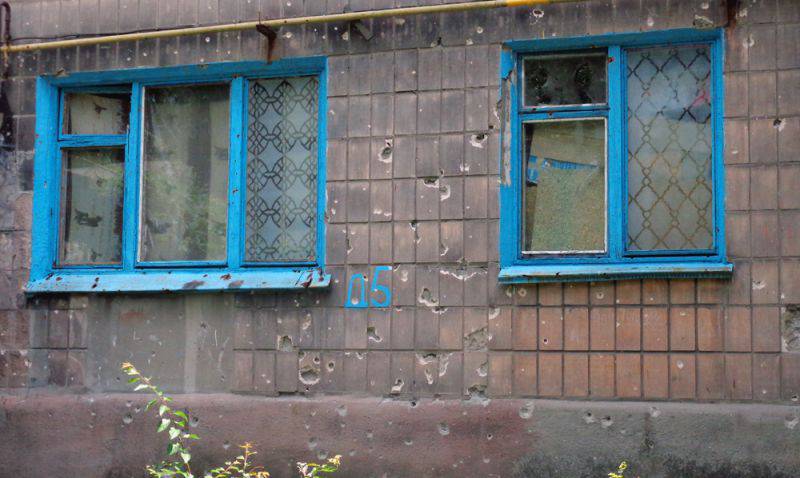 - And the dead were?

In the courtyard, where the funnels of explosions are overgrown with flowers, carefree children play, swing on the surviving swing. And near - swings, which can no longer ride. After all, this playground has suddenly become a target for “Maidan patriots”. 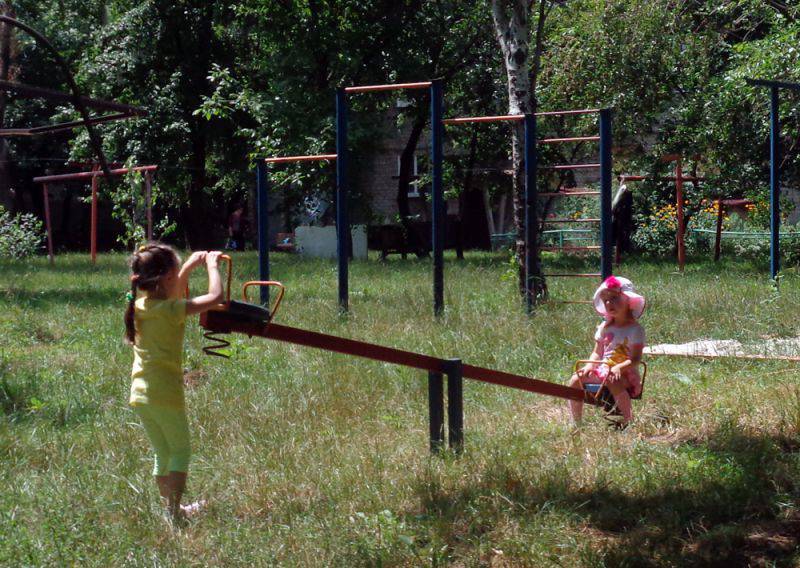 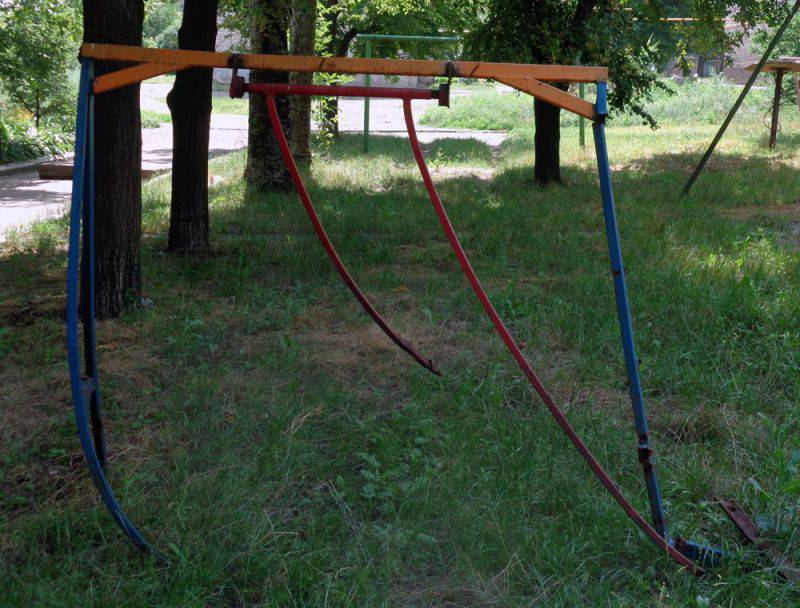 The cozy city Yasinovataya lives its usual life, but broken windows in many houses are gaping with war. In one of the windows of the house seen by shrapnel I notice an icon - a person living there hopes for protection from above. 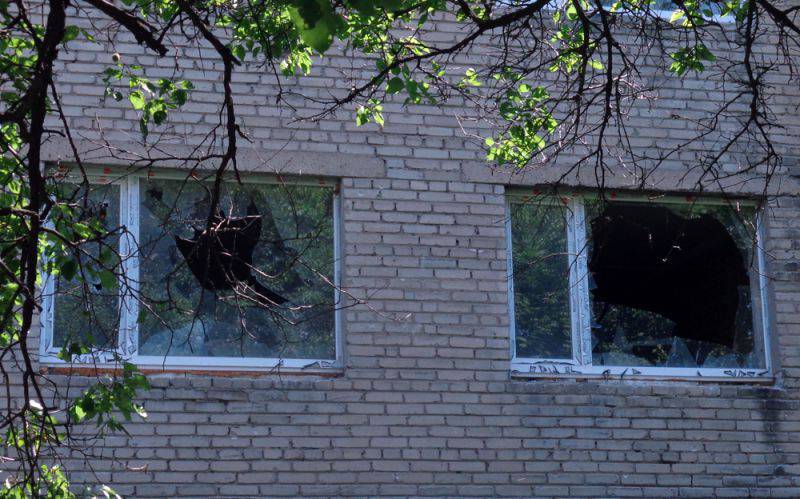 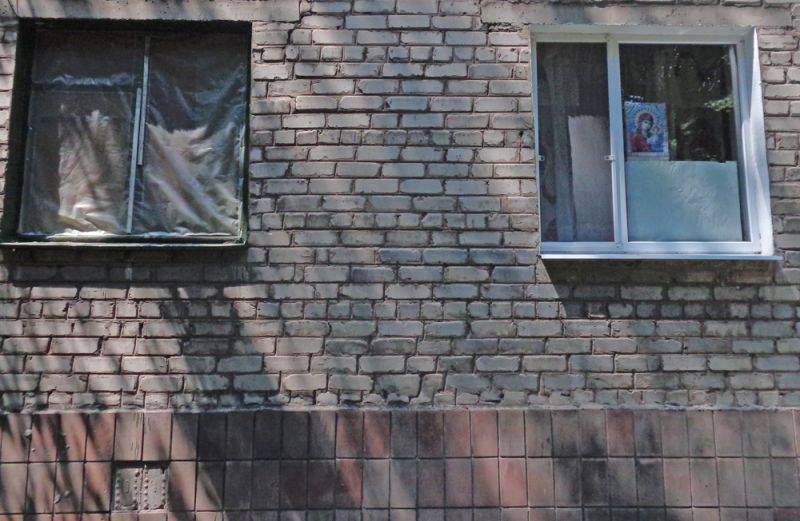 Ctrl Enter
Noticed oshЫbku Highlight text and press. Ctrl + Enter
We are
Debaltsevo has a twinDebaltsevo: Hero City Day
6 comments
Information
Dear reader, to leave comments on the publication, you must to register.