American gulag. And they are all about the Stalinist repression ...

July 3 2015
45
When the word “deportation” is pronounced in Russia, an image often arises that is actively developed from the so-called Gorbachev perestroika - deportation of the Crimean Tatars, deportation of the Chechen people, the spirit of Stalinist repression and everything like that. When the word "internment" is pronounced in Russia, the image of the sensational Katyn storieswhen Polish officers were taken to the territory of specially equipped camps of the NKVD, and then, allegedly solely by the forces of the NKVD, again in the spirit of Stalinist repression, were shot, having covered thousands of corpses with raw Smolensk soil.


For millions of Russians, all these images became so firmly associated with the Soviet past that the call to repent, which came about, which is interesting, more often from Western “partners”, was taken for granted. They repented, repented, under the malicious cries of liberal "comrades" who on a permanent basis declared that, they say, the West, which is democratic and humanistic, could not allow any deportations and internment to help "unwashed and uneducated" Russia to understand its monstrous guilt in front of individual nations.

Certainly, the deportation of Chechens, Crimean Tatars, representatives of other nations (whole nations!) During the Great Patriotic War is not a bright page in the history of our multi-ethnic and multi-religious state. This is grief, pain and grief of thousands of families. And this grief, pain and grief still echo rend the soul. All this is understandable, and modern Russia does not try to forget about it at all, does not make attempts to cross out the whole chapter of its great history.

And in this regard, the attempts of “friends” of Russia to declare that deportation and internment are only from Soviet history look like a thousand-fold hypocrisy, and that in other countries (countries of “victorious democracy”) there was no such thing during the Second World War, and could not be by definition. Wasn’t it? .. If our liberal “friends” are trying to convince us of this, then let's turn to a story that will reveal some interesting facts about the partners in the anti-Hitler coalition. And July 3 may be the day when it will be quite reasonable to do it.

So, July 3 is a distant 1890 of the year. Exactly 125 years ago, the US is growing its 43 state - Idaho. It would seem, what have the 43-th American state and the story about the deportation and internment? But even with that ... It was Idaho that became the American state in which during World War II the largest camps were created for the deportation of the Japanese population of the United States, the camp for internment of the Japanese, most of which, most importantly, had citizenship United States of America. The systems of these camps may well be considered the American "Gulag", which has ground thousands of lives.

And the question is: did the current American authorities repent, did the living generations of Americans repent for the fact that innocent people were driven to concentration camps, from which thousands of families of American citizens of Japanese origin did not return? .. It seems that if a modern American to ask whether he is ready to repent for the crimes of the previous authorities, the absolute majority will simply round his eyes and declare that he does not understand at all what other crimes are being discussed ... The USA is the victors in the Second World War - that's every American knows about, and the USA is the initiator of the creation of a considerable number of concentration camps for internees - the “impudent anti-American lie and no more” ...

Well ... About the truth, which was forgotten in the USA today, and about which local “human rights activists” are for some reason not ready to remind.

Washington subjected deportation and internment to special camps to a total of over 120 thousands of Japanese. About 12 thousands of them were kept in special camps in Idaho - Minidok camp and a camp located near the cities of Kuskiya. Most of the deportees are Japanese with American passports who lived on the west coast of the United States. 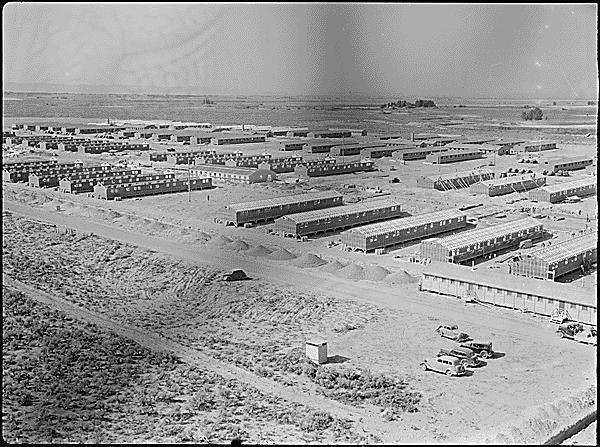 In the States, if I may say so, today the “widely unknown” directive of President Franklin Roosevelt from February 19 of the year 1942. This is an emergency decree №9066, which gave the military administration the authority to evict people into pre-prepared special camps. There is no clear indication of what kind of nationality should be deported in the first place, as Roosevelt’s decree does not exist, but this issue did not arise. By that time, anti-Japanese hysteria was going off scale. The decree referred to "special actions in relation to persons representing ethnic groups of states not friendly to the United States." The first among those, of course, is Japan - this is how the question was perceived by the Americans. 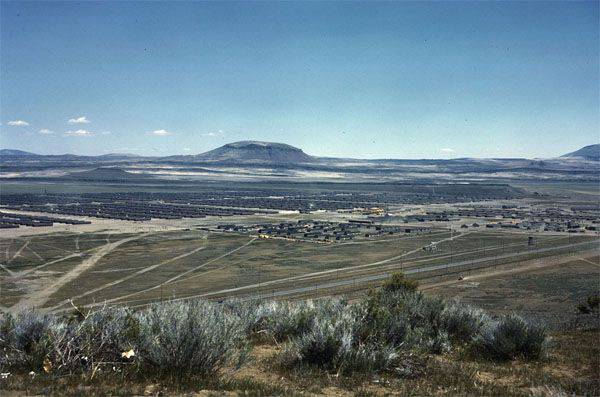 It was this extraordinary decree in a “democratic state” that led to the fact that more than 120 thousands of Japanese living in the US, as well as about 11 thousands of Germans and at least 3 thousands of Italians, were deported and interned. Thus, about 135 of thousands of people, the American state has actually officially counted among the "agents of foreign intelligence services" and "spies" conducting anti-American activities that require constant monitoring in special camps. 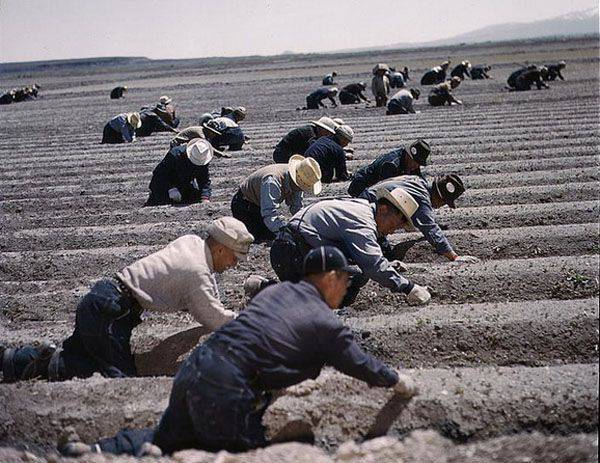 Almost 30% of the territory of the United States, according to this decree, was divided into the so-called military zones, and the heads of each of these zones received virtually unlimited rights to deport all those whom they consider anti-American. 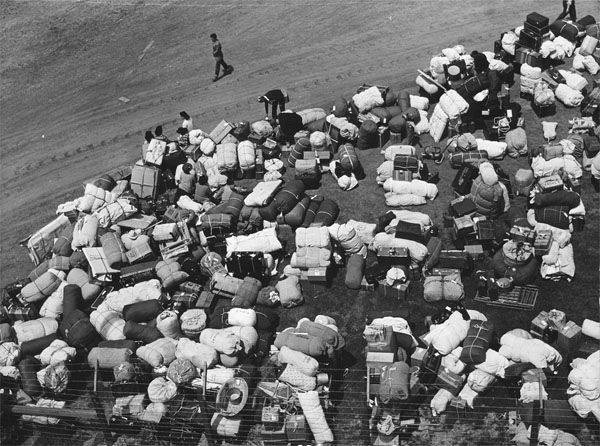 By the spring of 1942, anti-Japanese sentiment simply overwhelmed the United States, and a large-scale information campaign began that aimed to justify the mass relocation of Japanese people to special camps and to sow hatred of US citizens of Japanese origin from other ethnic groups living in the States. In the United States, a blatant street harassment of Japanese citizens and denunciations to the police that a Japanese family lives in such and such a house - of course, the family of “spies” was considered not shameful ... Moreover, the Japanese were brought to special camps from countries with which the United States border - Mexico, Canada. And even Japanese from Panama and Peru were brought to Idaho camps! 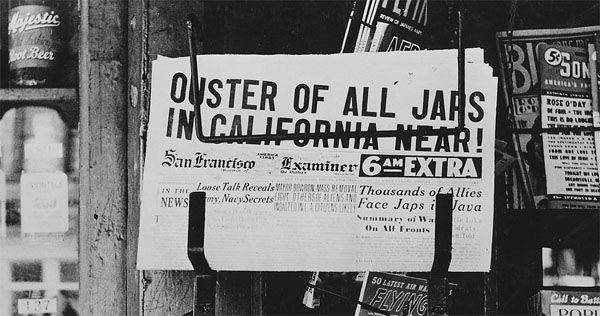 American newspapers of the time convey the spirit of hysteria.

A viper is always a viper no matter where it hatched. And an American of Japanese descent, born to Japanese parents, grows up Japanese, but not American.

American farmers advocate the eviction of the Japanese (in the original - "Japs") in special areas. Farmers will grow the agricultural products that the Japanese grew, and do not want them to return even after the end of the war. 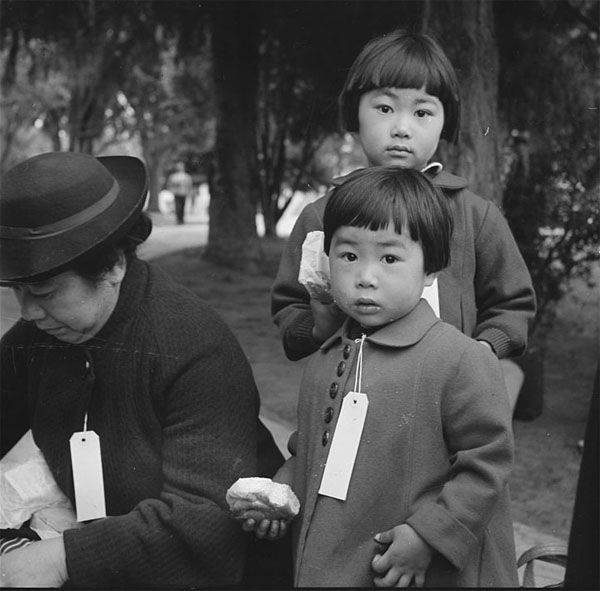 What was the content of the deported and interned in special camps of the US military administrations? These are most often wooden huts without sewage and lighting. 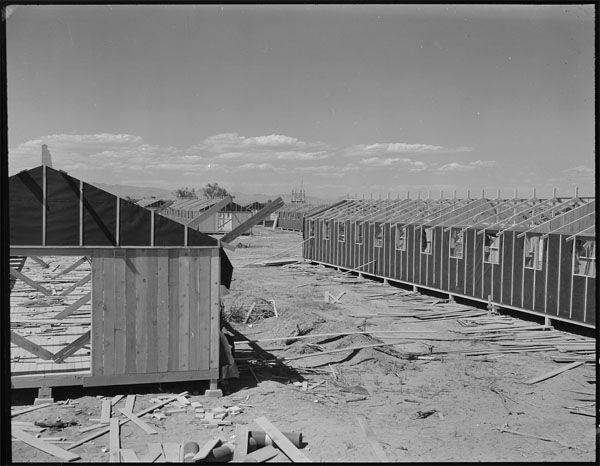 In the northern states of the United States, in which the deported Japanese erected barracks for themselves, there was often no heating in the form of ordinary burzhuek stoves. As a result, the temperature inside the barracks in the harsh winters fell below minus 20 Celsius. People died from hunger and frostbite. 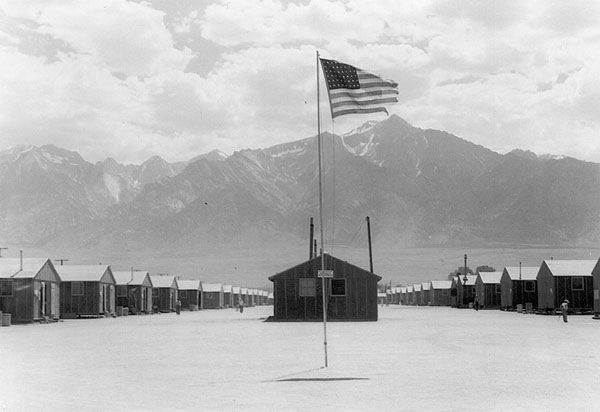 To find food for themselves, people tried to break through the barbed wire fences. There is a lot of evidence from contemporaries of the events, telling that the guards shot those who tried to break through the "thorn" in search of mushrooms or berries. In winter, the deportees dug snow to extract frozen grass and at least diversify their diet. Infectious diseases spread in the camps, and the camp administration did not try to stop this spread. There was a tacit directive stating that the fewer deported Japanese left in camps, the better — more economical ... And those fewer and fewer indeed remained. Accurate data on how much has disappeared in the American "Gulag", is not presented until now. And one more thing about the American economy - the absolute majority of people were not taken to special camps, but were forced to get there (attention!) At their own expense! .. The instruction was kept that Japanese families in the United States had to report that they had complied with the law and themselves moved to the concentration camp. Cynicism, which in the history still search! 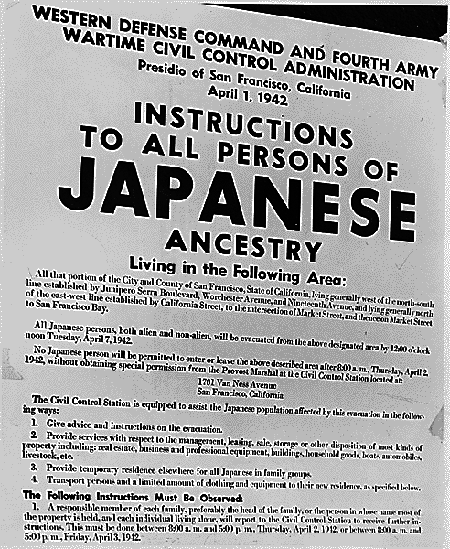 And further from the series “special democratic cynicism”. Franklin Roosevelt's Emergency Decree of February 1942 was canceled ... in 1976! Four years later, the United States established a commission to investigate episodes of the unconstitutional acts of the US authorities during the war years. As a result, the commission came to the "amazing" conclusion: the mass resettlement of the Japanese was not justified. Each of the survivors of the camps, the US government appointed compensation in the amount of $ 20 thousand, and only those who at that time had a passport of an American citizen. Given the fact that tens of thousands of Japanese began to abandon their American citizenship while in special camps, compensation was not given to everyone who survived after camp arbitrariness. With monetary compensation and a statement about the “groundlessness of resettlement”, the “repentance” of the Americans was completed.

The last time about the mass deportation of the Japanese population of the United States was remembered in 1998 year - then the last Japanese who survived in American camps came to light, who were transferred 20 thousand dollars as an “apology”. 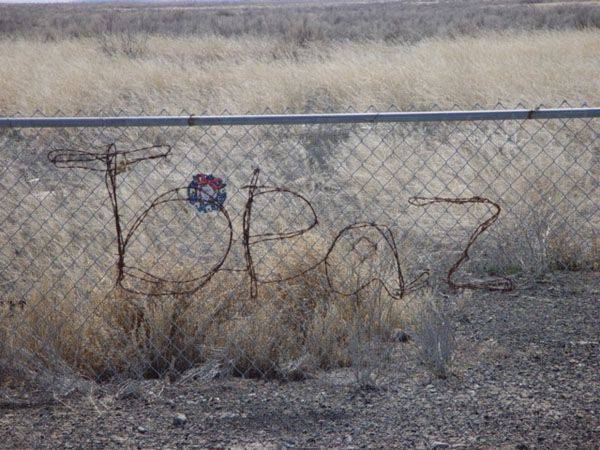 "Memorial" at the site of the special camp "Topaz"

And, in fact, everything ... The history page is turned over, and nobody remembers the American “Gulag” in the USA today, for democracy ... FOR DEMOCRACY! ..