“Fresh” Thoughts of US Senators on Georgia 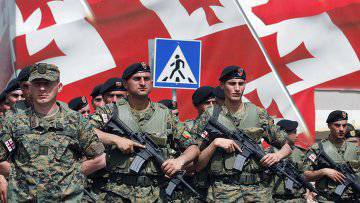 In October, the Washington-based 2011 th working group, led by US senators, presented a very interesting report on how it (the group) sees the further development of Georgia. Moreover, the report had very few words about the economic development of the former Soviet Republic, and more and more it was about its military doctrine, more precisely about the doctrine of the United States and NATO in relation to Georgia.


So, these researchers of the “Georgian problems” found out that literally all the evils of the growing Georgian democracy only come from the fact that the “occupying forces” are in Abkhazia together with South Ossetia. If you develop the idea of ​​senators and their like-minded people, then all the troubles of the Georgians are only from Russia - the “occupation” troops are Russian.

The working group does not simply state the facts, but cites a whole list of actions that should help the Georgian leader to make his country "powerful and prosperous." Among other points of this list, there is the following: to put pressure on Russia with a view to withdrawing the Russian contingent from the designated territories and to quarter the mixed (read-NATO) contingent of peacekeeping forces there. At the same time, the senators are missing one “small” detail: the people of both South Ossetia and Abkhazia would hardly agree to those who created Mr. Saakashvili three years ago to start a war to “create peace” on their land.

Senators propose to carry out the training of Georgian troops on the territory of Georgia. It seems that somewhere we have all seen and heard this. Wasn’t such training conducted by American military specialists of the Georgian formations just before the attack on Tskhinvali? And didn’t there have been publications on the WikiLeaks website about how those same American experts spoke of the Georgian army, calling it extremely undisciplined (this is the softest epithet)? It turns out that some forces in the United States again want to "prepare" the soldiers of the "marshal" Saakashvili for another provocation. Well, not to the military parade! .. Especially since Saakashvili himself knows how to arrange parades.

By the way, even if we admit (like a nightmare) that Russian troops suddenly receive orders to leave South Ossetia and Abkhazia, what mission will the NATO "peacekeepers" perform there? Georgia, for example, will again try to invade Tskhinvali, and NATO soldiers will start shooting at tanks Saakashvili? .. Some kind of phantasmagoria.

Further, the speakers make a proposal to create in Georgia a certain “logistics hub”, which will be, as much as possible, the gateway to Central Asia. Gateway, again, for whom? If for NATO, then the gate can not be called peace. And the Americans themselves have such a gate too much. Maybe it would be clearer if the senators called Georgia a “logistics hub” for testing Russia's patience or a “gateway to Caucasian oil.” In this case, things at least called their own names.

Some experts in Moscow say that such proposals by the US commission on Georgia are more like the plot of the thriller “How Americans finally turn the Russians against themselves”.

In general, the above judgments in terms of the development of Georgia’s military capabilities and its gradual drawing into the North Atlantic Alliance by the Americans look like an attempt to re-step on the old rake of Saakashvili. Moreover, if the Americans begin to strengthen their military contingent in Georgia, then they may simply not have enough people. After all, today the Americans are still fighting with someone in Iraq, are tightly bogged down in Afghanistan, have views of Iran and Pakistan, continue to participate in "help" to Libyan rebels, patrol the Persian Gulf, the Mediterranean Sea. And all this at a time when the overwhelming majority of US citizens oppose the demonstration of military power, which is based on a “leaky budget” and drives the country's economy deeper and deeper into the crisis abyss. Perhaps there will be soldiers in Georgia who, according to Washington, will be withdrawn from Afghanistan. In this case, Georgia will turn into a kind of caravanserai, where, together with the "Afghan" Americans, accustomed to cruelty, violence and drug trafficking, all these vices will come. Here, even Saakashvili, I suppose, will not be happy for such a military presence as part of the “deterrence program.” In this regard, the situation may turn into a Kosovo variant, when no one knows where the curve of American power thought will lead.
There is also an opinion in the USA about the fact that Georgia will need NATO in order to prevent Russia from “building the USSR” again. This opinion is increasingly growing in the government circles of the United States, especially after Putin, firstly, announced his consent to go as a candidate for the presidential election 2012, and, secondly, after he also announced creation of the Eurasian Union.

It turns out that the Americans are not at all concerned about the security and development of Georgia, but only about their interests in the immediate vicinity of the Russian borders.

We are in Yandex Zen
Russia and Georgia: traps from "well-wishers"
NATO leads Saakashvili by the nose
50 comments
Information
Dear reader, to leave comments on the publication, you must to register.