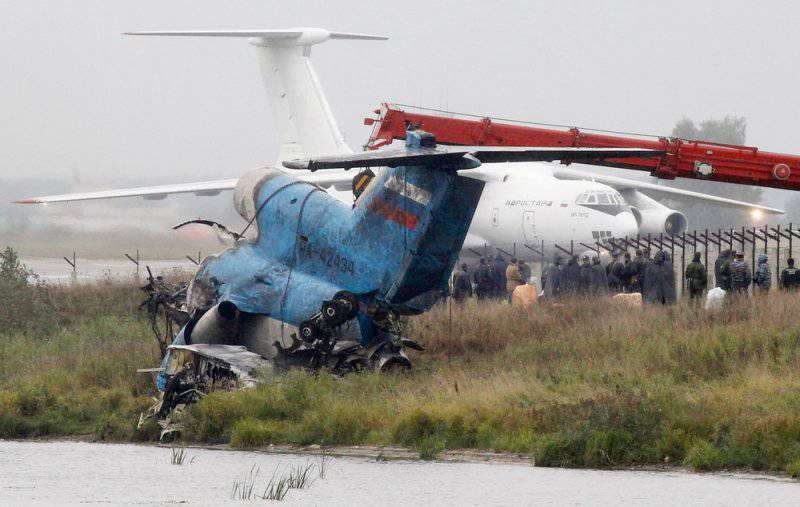 As it became known to Kommersant, yesterday the specialists of the Gromov Flight Test Institute, participating in the investigation of the Yak-42 disaster with the hockey team of the Yaroslavl Lokomotiv on board, completed a series of flight experiments. They fully confirmed the version that the plane and its passengers were killed by one of the pilots, who slowed down during takeoff. Test participants say that if this pilot had been eliminated from control altogether, the takeoff would have passed normally.

Thanks to the established good weather, the test pilots of the LII named after Gromov yesterday flew the Yak-42 twice in Zhukovsky near Moscow, observing all the parameters of the September 7 fatal take-off at Yaroslavl airport in Tuhnoshn. The test pilot, who was sitting in the commander's left chair, imitating the actions of his deceased colleague from the Yak-Service company, during acceleration kept his feet on the brake pedals. At the same time, he had to push the steering wheel towards himself, raising the elevator of the vehicle to the tailing position. Yesterday’s flight was different from the previous five (see Kommersant from October 15) in that this time a special device was attached to the steering column of the aircraft - a dynamometer that measures the efforts of the pilot’s hands.

While the elevator was in the normal position for takeoff of the Yak-42D - 5-6 degrees, efforts from the pilot, as the device showed, required very slight - only a few kilograms. In other words, even in an uncomfortable position, with feet on the pedals, the pilot could maintain the correct flight configuration of the machine. However, as follows from the data of the flight recorder of the crashed aircraft, its elevator was rejected, first during acceleration, to 10 degrees, and then, before leaving the ground, to 13 degrees. When the testers tried to reproduce this deviation, it was necessary, according to the testimony of the dynamometer, to dozens of kilograms of hands.

Provide it, without resting their feet on the brake pedal, the testers, they said, could not. The pilot managed to keep the elevator in the position of 13 degrees for a few seconds. In order to provide the required force in 64 kg, the tester had to urinate to put pressure on the brakes.

The latter, or, as the testers themselves say, extreme, takeoff has become a kind of demonstration performance. Having accelerated and set the elevator in the normal position of 5 degrees, the testers simply removed their arms and legs from the controls of the vehicle, as if avoiding piloting, and the Yak-42 confidently rose into the air.

Thus, during the flight tests, a version was experimentally proved that the Yak-42 and 45 people on board destroyed not technical faults and not problems with the quality of fuel, namely, the braking moment on its wheels. It was created again by a non-failure technique, and by the pilot who, for some reason, put his feet on the pedals during takeoff.

The results of flight tests will form the basis of the report of the technical commission on the causes of the Yak-42 crash. Experts, as it became known to "Kommersant", have already begun its preparation.

We are in Yandex Zen
Installed the crew of the deceased attack aircraft found during the construction work of the bridge across the Kerch Strait
Azerbaijan hosted a military parade
5 comments
Information
Dear reader, to leave comments on the publication, you must to register.