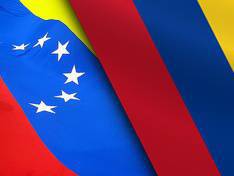 Three days gave the Venezuelan authorities to the staff of the Colombian embassy in Caracas so that they liberated the country. Colombian diplomats were informed about this by the Minister of Foreign Affairs of Venezuela, Nicolas Maduro.

Maduro's warning was issued immediately after the statement of Venezuelan President Hugo Chávez about breaking off diplomatic relations with Colombia, reports "Echo of Moscow".

The Venezuelan foreign minister has already announced that Colombia, according to Caracas, is preparing for war.

Recall, on the eve of the Venezuelan President Hugo Chavez announced the severance of diplomatic relations with Colombia, announcing the introduction of "maximum alarm" on the border with a neighboring country.

He explained his decision by the ongoing “aggressive policy” of the current Colombian leader Uribe in relation to Venezuela. According to Chávez, Uribe "represents a threat to the world," and before giving up his powers, he is capable of any act that may even lead to armed conflict.

Chavez indicated that he had decided to sever diplomatic relations with Colombia after he became aware of the “baseless” accusations against Venezuela, which the Colombian ambassador to the Organization of American States (OAS), Luis Alfonso Hoyos, had put forward. At the OAS session, he presented evidence of the presence of insurgents from Colombia on Venezuelan territory, whom Caracas considers “outright lies and gross fraud”.

The aggravation of relations between Colombia and Venezuela occurred after Bogota announced the creation of a new military base on the border between the two countries. At the same time, the Colombian government decided to form six paratroop battalions. Colombian Defense Minister Gabriel Silva announced that a new base is being created in La Guaira in the north of the country in close proximity to the border with Venezuela. The number of its personnel will reach 1 thousand soldiers, said Silva. At the same time, six new amphibious battalions were formed in the armed forces of Colombia, which come into service with helicopters provided by the United States.

As previously reported, relations between Caracas and Bogota were spoiled after the signing of a treaty between Colombia and the United States to provide seven military bases to the US military, signed in October 2009 of the year.

In accordance with the document, a group of 1 thousand US 400 military will remain in Colombia, and they will assist the country's authorities in the fight against illegal drug trafficking. They will be located on the territory of seven military bases in the country. US troops, previously located on the territory of Ecuador, will be moved to the valley of the Magdalena River in Colombia.

Meanwhile, Bogota accuses Caracas that the Venezuelan leadership is assisting the anti-government extremist group FARC (Revolutionary Armed Forces of Colombia). Assistance, according to the Colombian authorities, is to arm the members of this organization, as well as to provide them with the territory of Venezuela for asylum.