9 2015 June
22
Recently, the country of Macedonia, through the mouth of Prime Minister Nikola Gruevsky, made a statement. Gruevsky said that Macedonia will join the Russian project “Turkish Stream” only under the condition of an appropriate agreement between Russia and the European Commission, since Macedonia is a country of Euro-Atlantic orientation. He further noted that this country is not very much in need of the development of gas infrastructure. 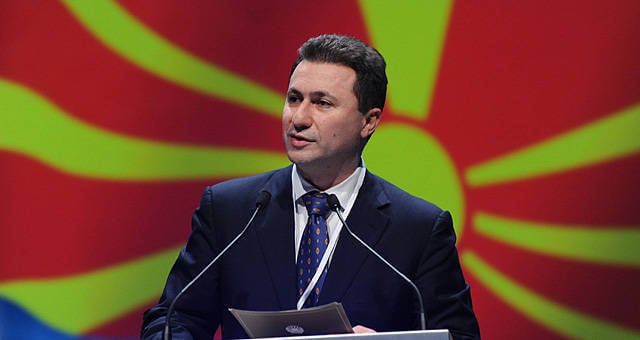 As reported at the end of May "Lenta.ru" With reference to the Bulgarian Novinite Agency, the Prime Minister of Macedonia, Nikola Gruevsky, made a statement regarding the Turkish Stream gas pipeline project.

According to Gruevsky, Macedonia will join the project only if an agreement is reached between Russia and the European Commission. The prime minister added that Macedonia is a country that makes decisions based on a Euro-Atlantic orientation.

Further, Mr. Gruevsky noted that Macedonia does not really need to develop its gas infrastructure. True, Macedonia needs new sources of supply: the country wants to have guarantees of energy security in the long term. Well, and this country is going to build gas-powered power plants.

Yuri Barsukov (Kommersant) writes that a small country of Macedonia can play the same role in the fate of the gas pipeline as Bulgaria for the “South Stream”. On the other hand, expert Alexey Grivach from NESB, Macedonia, just like Bulgaria, can deprive himself of possible incomes from gas transit, notes. As for Russia, it can theoretically do without Macedonia, laying a pipe from Greece to Southern Italy right away or using the Eastring project to transport gas to Baumgarten. True, this is an extremely difficult option, requiring the launch of a large Trans-Balkan gas pipeline (in which Gazprom does not participate) in the reverse mode.

“In such a situation, Kommersant’s sources increasingly doubt that the Turkish Stream will have a land part outside of Turkey. The overwhelming majority of the Kommersant interlocutors on the gas market, both in Europe and in Russia, believe that Gazprom will limit itself to laying two lines of the gas pipeline through the Black Sea at best. Especially since the monopoly already has contracts for such a project with the Italian Saipem and the Swiss Allseas Group. Both Saipem and the Dutch subsidiary of Gazprom South Stream Transport BV last fall had to seek permission to work and purchase equipment from the authorities of Italy and the Netherlands, respectively, because of sanctions against Russia. Permissions received only one thread. "

While experts were wondering what the outcome of the Macedonian-European история, a messenger from the EU arrived in the country of Macedonia - European Commissioner for Neighborhood Policy and EU enlargement issues Johannes Hahn.

As reported by 2 Jun RIA News", Johannes Hahn stated that the leaders of the political forces of Macedonia agreed to hold elections by the end of April 2016. According to the European mediator-mediator, Nikola Gruevsky and his opponents agreed that "early elections should be held by the end of April next year."

However, three days later another statement was received - from the irreconcilable opposition.

5 June TASS reported that the leader of the Social Democratic Union of Macedonia (the country's largest opposition party), Zoran Zaev, refused to participate in negotiations to resolve the domestic political crisis.

Analyst Dmitry Sedov ("Fund of Strategic Culture"), going beyond the actual Macedonian question, recalled that the United States cooperated with the so-called Kosovo Liberation Army, despite the fact that the KLA traded heroin and human organs, and its militants were trained in Al-Qaida camps. To top it all, its leader Hashim Thaci, nicknamed "The Serpent" (now the Prime Minister of the "Republic of Kosovo") was looking for Interpol. According to the analyst, the American “project of Kosovo” was created “with a view to the complete elimination of Russia's influence in the Balkans and the destruction of the very memory of the unity of the Slavs.” Obvious this plan made today Macedonia.

The main instrument of US foreign policy in the Balkans is the “Great Albanian Project.” The idea involves the redrawing of the entire Balkan geopolitical space.

“In order for“ Great Albania ”to take place, its north-western regions should be cut off from Macedonia, their southern territories should be separated from Serbia and Montenegro, and the north of the country from Greece.

According to D. Sedov, the builders of “Great Albania” will not be satisfied with the acquisition of the Kosovo region. The next stage of expansion will be an attempt to tear off its southern regions with a mixed Serbian-Albanian population from Serbia.

Today, KLA militants waiting for their hour move between the “Republic of Kosovo”, the south of Serbia and northwest Macedonia. Kosovo for Europe is a territorially-political formation of a “fundamentally new type,” the analyst points out. This is a "classic protectorate, fully controlled by the United States."

Well, what will happen to Macedonia?

According to the expert, decisions regarding the future of this country are not made at all in Skopje. In Skopje, there is only a herald: this is the American ambassador. He "brings the decisions made to the Macedonian government and the leaders of the opposition parties."

American ears stick out of the den of terrorists. For example, after the Macedonian police repelled a well-known Kosovo Albanian attack by the 9 in May on Kumanovo, fourteen terrorist corpses were found at the site of the clash. It is interesting that then the four bodies disappeared. It turned out that these were the bodies of two American and two British instructors who were part of the attackers. The bodies “surfaced” in Kosovo, based on the “Bondsteel” base.

Nana Yakovenko also writes about the scenarios of the probable dismemberment of the state ("InoSMI"), economist, analyst of the international space communications organization Intersputnik, expert of the International Institute of Energy Policy and Diplomacy MGIMO (U).

She recalls that there is talk of a deeper "federalization" of Macedonia, of making it a "flexible federation", and even "confederation". Western experts are talking about a possible dismemberment of the country, since Macedonia is supposedly an artificial state. And if so, a part of the country must be given to Bulgaria, and a part to Albania.

Meanwhile, in Tirana, the analyst writes, the prime minister proclaims the slogans of "Greater Albania." It was in Tirana (the capital of the Republic of Albania - O. Ch.) That the leaders of the Albanian parties of Macedonia follow the instructions.

Nor is the US ambassador to Skopje idle. He calls the leaders of political parties and the opposition: apparently, he also “distributes instructions corresponding to the American interpretation of the script”.

According to the expert, the situation in Macedonia is extremely serious: “The experience of the Maidan in Ukraine shows that the change of objectionable heads of state, it seems, has now been put on stream. Iraq, Libya, Syria, Ukraine, now - Macedonia ". But what about the “Great Albanian State”? Is not enough for the West "Islamic state"? Such questions are rightly given by Nana Yakovenko.

Russia, we add from ourselves, from the lessons of the next “Maidan”, should extract the simplest fact: where Moscow wants to somehow develop trade relations with other states, politics immediately becomes across the economy. There was South Stream, huge amounts of money were invested in infrastructure — but John McCain visited Bulgaria and South Stream was frozen and then canceled. Now there is an idea about the “Turkish Stream”, but the Macedonian Prime Minister Gruevsky said that his country will join the project only with the appropriate agreement between Russia and the European Commission, since Macedonia is a country of Euro-Atlantic orientation. And so that Gruevsky was more accommodating, Western “curators” scare him at the same time with “Maidan” and “flexible federation”.

In short, in our time, the laying of pipelines has turned into a political rather than an economic occupation. Mr. Gruevsky, maybe he would like to build natural gas power stations and make money on the transit of “blue fuel”, but even more, he wants his country not to be cut into pieces by the “federalists”.