Under whose tune dancing Duda

27 May 2015
41
In the presidential elections in Poland won Andrzej Duda. In relation to Russia, this person is even more belligerent, if not aggressive, than his predecessor, Komorowski. The mentioned Duda supports the idea of ​​sending troops to the aid of the Ukrainian army, bravely fighting for the Donbass. Warsaw has a real chance to help fraternal Kiev: after all, the president in Poland heads the armed forces and determines the state’s foreign policy. 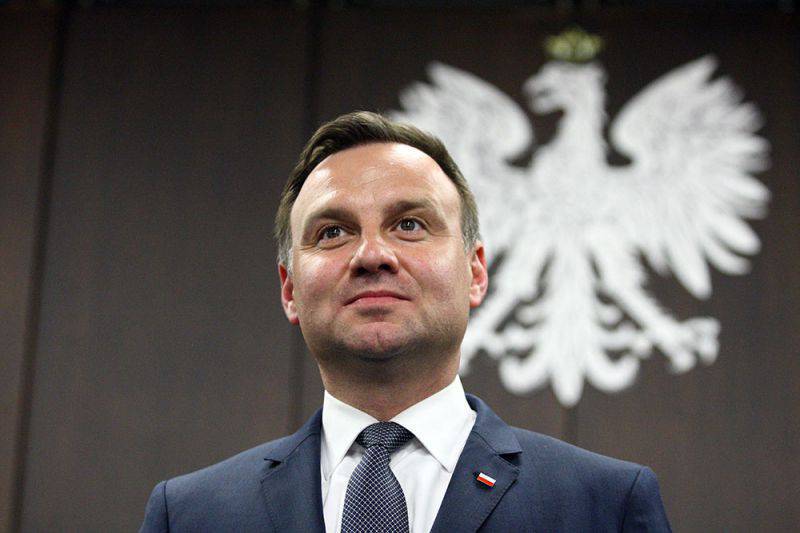 Duda 43, he is still young and full of strength and ambition. And he has a lot of plans. And the victory in the elections just has to implement the most ambitious searchlights.

By the way, the victory was not deafening: the Poles gave 48% of votes (rounded) for competitor Bronislav Komorowski, and Duda received 52%.

What kind of person is the new president of Poland? And what are his plans?

Ban Duda is a new president, but in politics a man is not new. In the elections, he acted as a candidate from the opposition (conservative) party "Law and Justice". Andrzej Duda - Member of the European Parliament. By profession - a lawyer.

Like many presidential candidates in stories humanity, Duda promised voters a change. There is probably no such candidate in the world for a major political post who would not brainwash the electorate with speeches about positive changes and a direct path to a brighter future. “Those who voted for me voted for the changes. Together we can change Poland, ”said Duda in Warsaw.

"BBC" recalls that Andrzej Duda worked as a legal advisor to President Lech Kaczynski. Moreover, Duda considers himself the spiritual and political heir to Kaczynski.

In an interview with Rzeczpospolita, he wrote to the BBC, he said that two days before his death in a plane crash, Mr. Kaczynski told him: generations are coming and people like him, Duda, will have to take responsibility for their fate Poland.

As noted by RBCDuda promised the Poles that the doors of the presidential palace would be open to any public initiative. In addition, he said that he would do everything to strengthen democracy in Poland.

Andrzej Duda - a supporter of rapprochement with Ukraine. Giving an interview to RMF radio station, he spoke about the possible dispatch of Polish servicemen to support the Ukrainian army in the Donbas.

As for the plane crash near Smolensk and the death of Lech Kaczynski, a few years ago Duda starred in the documentary film “Fog”. The authors of this film questioned the official version of the reasons for the death of the president and put forward their hypothesis, accusing the Russian special services of the tragedy.

With the aforementioned Kaczynski, political intrigue is already unfolding. In the electoral headquarters of Andrzej Duda, it was reported that the chairman of the Law and Justice Party, Jaroslaw Kaczynski, in the autumn of 2015, could be nominated for the post of Prime Minister of Poland. Moreover, the headquarters have no doubt that the candidate "will become the Prime Minister of Poland", notes Rosbalt. And another quote from the statement of the head of the election headquarters Beata Szydlo: "... it was thanks to Kaczynski that Dud became the president."

If Kaczynski comes to power, we will add on our own, that politicians who are hostile to Russia will fill Poland. In particular, Kaczynski is not known for the warmest attitude to Putin. And the party “Law and Justice” became famous as a supporter of close cooperation between Poland and the United States.

And, of course, the question of NATO. At the pre-election debate, candidate Andrzej Duda called for the deployment of bases of the North Atlantic Alliance on Polish territory.

RIA News" quotes the analyst's opinion given in the British newspaper The Guardian.

The victory of Andrzej Duda in the elections can fix a turn to the right, which ultimately will lead to a "nightmare in Polish foreign policy." Relations with not only Russia, but also with the European Union can deteriorate. So thinks the head of one of the independent analytical centers of Warsaw - President of the Institute of Public Affairs of Poland Jacek Kukharchik.

The expert believes that Poland’s relations with other European countries will largely be determined by whether A. Duda can keep a moderate agenda. If he is influenced by his party, Law and Justice (the analyst calls it nationalist), a “nightmare” can happen: “This can turn into a nightmare for Polish foreign policy, since it can mean coming into conflict with Germany and aggressive rhetoric on towards Russia. We are now on a thorny path ... "

The head of the State Duma’s international affairs committee, Alexei Pushkov, "Twitter" Such an assessment of Duda’s election victory:

“The Poles got rid of Komorowski. Hate for Russia was not enough to win the election. Lesson to his colleagues from neighboring countries. "

Elections in Poland commented on the newspaper "Sight" Director of the European Center for Geopolitical Analysis Mateusz Piskorski.

“The loss of Komorowski,” he believes, “is the result of the fatigue of a large part of the electorate from the ruling Civic Platform party.” It is also the result of a rather sluggish election campaign of Komorowski, who was too self-confident. He thought he could win even in the first round of elections. And then it was too late to take additional measures. ”

But in the campaign of Andrzej Duda, modern technologies were used: “He led a campaign in social networks, and also used technologies that are used during election campaigns in the USA”.

The expert believes that there is a certain similarity between the political lines of Komorowski and Duda. Komorowski said, for example: “Negative changes of the Russian side in relation to neighbors have caused the Russian-Ukrainian crisis, which is now affecting the security of the whole of Europe, of the entire Western world, including the security of Poland.” Also, the president declared the threat of "the appearance of green men."

Andrzej Duda points out that Poland should look for allies to confront Russia and Germany: both of these states are allegedly trying not only to use Warsaw in their own interests, but even to "divide Poland." A politician addressed Russia as follows: "... modern Russia, which, besides all this, also openly violates the norms of international law, has nothing to do with democracy."

The expert also recalls that Duda publicly supported the opinion of Polish politician Zbigniew Bujak, who spoke in favor of sending Polish soldiers to Ukraine.

The analyst also explains the success of Duda, among other things, a powerful election campaign. And populist promises, of course: “... 43-year-old Andrzej Duda, whose greatest political achievement until recently was the post of Deputy Minister of Justice in the office of former Prime Minister Yaroslav Kaczynski. He conducted an extremely bright and vigorous presidential campaign, having traveled by bus (dubbed “Dudabus”) over 240 Polish cities and distributed a number of popular election promises (in particular, gave the word to do everything possible to cancel the unpopular decision to increase the retirement age in the country to 67 years old)".

In his article, the analyst gives an opinion on the victory of Duda, a well-known Polish chief editor. “I remember the era of Yaroslav Kaczynski’s rule and Rights and Justice,” says Adam Michnik, editor-in-chief of the Polish newspaper Vyborcha, “is a political provocation, the super power of the special services. Poland seemed a country of suspicion and fear. ”

The inauguration of the new Polish President, Andrzej Duda, we will add, 6 August 2015 is due to take place. Thus, the “right to right” and “nightmare in Polish foreign policy” expected by experts can take place no earlier than autumn - winter. We will also find out about the possible NATO novations of Duda and the attitude towards the Ukrainian crisis not earlier than autumn. At the same time, it will be known exactly how the “Law and Justice” party will promote the ideas of “close cooperation” of Poland with the USA. Especially since the chairman of the “Rights and Justice” J. Kaczynski is promised in the autumn to be “promoted” to the post of prime minister. And this man, like Dudu, who seeks to bring Poland closer together not with the EU, but with America, is hard to suspect of sympathy for Moscow.

Observed and commented on Oleg Chuvakin
- especially for topwar.ru
Ctrl Enter
Noticed oshЫbku Highlight text and press. Ctrl + Enter
We are
Donbass Liberation Day-3. "You survived and won, Donbass"New Polish President: closer to NATO and farther from Ukraine
41 comment
Information
Dear reader, to leave comments on the publication, you must to register.