The Art of Avoiding War ("The Atlantic", USA) 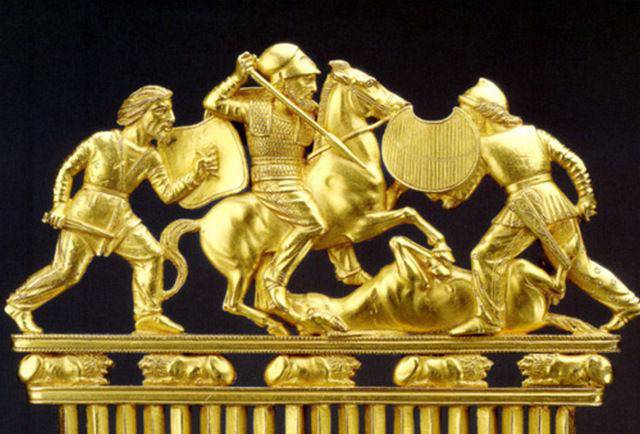 Why is it so difficult to defeat an enemy who does not want to fight, and what does this mean for the US foreign policy strategy?

The Scythians were nomads who dominated the vast stretch of Pontic steppes north of the Black Sea, that is, in the territories that today belong to Ukraine and southern Russia, from 7 to 3 a century before Christ. Unlike other ancient peoples, who left no trace behind them, the Scythians continued to be horrified long after their disappearance. Herodotus wrote that they “ravaged the whole of Asia. They not only collected tribute from all nations, but also raided and took away everything that those nations had ”. According to the legend, when Napoleon realized that the Russians were ready to burn their own capital rather than to surrender it to his army, he exclaimed: “They are Scythians!”

However, our contemporaries should pay attention not to the cruelty of the Scythians, but to their tactics of countering the advancing Persian army of King Darius at the beginning of the 6 century BC. Darius’s infantry approached the Sea of ​​Azov in the hope of meeting with the military units of the Scythians there in a decisive battle, but the Scythians continued to retreat deep into their vast territories. Darius was puzzled, so he challenged the Scythian king Idanfirs: If you consider yourself stronger - fight, if not - give up.

Idanfirs told him that since his people had neither cities nor cultivated land that the enemy could destroy, he had nothing to protect, and therefore he had no reason to give battle. Instead, his people constantly attacked the Persian troops with food, and then quickly retreated. And each time the small detachments of the Persian cavalry scattered in disarray, while the main army of Darius continued to weaken, more and more moving away from their bases and supply lines. In the end, Darius left the territories of the Scythians, in essence, having suffered a defeat and never got the opportunity to fight the enemy face to face.

In other words, killing an enemy is easy, but finding it is much more difficult. And today this truth has not lost its relevance. Today, the landscape of war is much broader and there are far fewer fighters on it than during the planned operations of the Industrial Age. Hence the conclusion: do not hunt for ghosts and do not dive too deep into a situation in which your civilizational advantage plays no role. Or, as the ancient Chinese sage Sun Tzu said, “the side that knows when to fight and when not to conquer wins. There are roads that do not go; there are armies that are not attacked; there are fortresses because of which they do not fight. ” In this regard, it is worthwhile to give an example of the fateful Sicilian campaign of the end of 5 century BC, which Thucydides wrote about in his chronicles: Athens sent a small detachment to distant Sicily to support its allies there, but over time they were so deeply bogged down in this conflict that the prestige of the whole maritime empire depended on this victory alone. This is described by Thucydides история It seems especially relevant if we recall the wars in Vietnam and Iraq. The history of the Athenians, as well as the history of Darius, show how an obsession with your own honor and reputation can lead a great power to collapse. The image of the army of Darius, moving nowhere along the boundless and inhospitable steppe in search of an enemy, who almost does not appear, is so strong that it goes beyond simple symbolism.

Your enemy will never fight you on your terms, only on your own. That is why the concept of asymmetric warfare is as old as the world. When militants bombed cars and attacked marines and soldiers in the labyrinths of Iraqi cities, they were Scythians. When the Chinese attack the Philippine warships and claim their rights to the sea, facing fishing boats, coast guard boats and oil platforms and avoiding any conflicts with US warships, they are Scythians. When ISIS warriors arm themselves with knives and video cameras, they also become Scythians. Largely because of these Scythians, the possibilities of the United States for predicting the outcome of conflicts are very limited, despite the status of a superpower. America faced the truth faced by all the empires: in order to maintain its status, you should not take part in every battle. In the first century AD, Tiberius retained Rome, refusing to intervene in the bloody internecine conflicts on the northern border. Instead, he showed strategic patience, watching the slaughter closely. He knew well the limits of the power of Rome.

The United States does not pursue militant groups in Yemen, as Darius did in Scythia, but instead, from time to time, deliver targeted air strikes. The fact that the US is using drones is not evidence of the strength of Americans, but of their limited capabilities. The Obama administration should recognize these restrictions and not allow the country to become even more bogged down, for example, in the conflict in Syria. If the US helps to overthrow dictator Bashar al-Assad on Wednesday, what will they do on Thursday, when they find that they contributed to the establishment of a Sunni jihadist regime, or on Friday, when will the Alawite ethnic cleansing begin? Perhaps this is exactly the battle in which you do not need to participate. But Assad killed tens of thousands of people, and maybe even more, and is supported by Iran! This is true, but remember that emotions, however justified they may be, can be the enemy of objective analysis.

How can the United States avoid the fate of Darius? How can the United States not suffer from its own pride while fulfilling all its moral obligations? To do this, they need to use intermediaries, wherever they are - even if these intermediaries are among their enemies. If Iranian-backed Hussites are ready to fight al-Qaeda in Yemen, why should the Americans object to this? And if the Iranians provoke a new wave of inter-religious conflicts in Iraq, let it be their fault, because they did not bother to learn the lessons of the Scythians. If the Middle East has become a place of constant conflicts of low intensity between different groups of Scythians, let Turkey, Egypt, Israel, Saudi Arabia and Iran themselves develop their own balance of forces, while the United States will be somewhat aloof. After all, caution is not the same as capitulation. And finally, let the United States regain the status of a sea power in Asia and a land defender in Europe, where there are far fewer Scythians and much more ordinary villains. Scythians are the enemies of missionary nations, nations that know no boundaries. America, of course, must try, but it should not - like Darius - overly exert its strength.