Chestnuts are blooming in New Russia 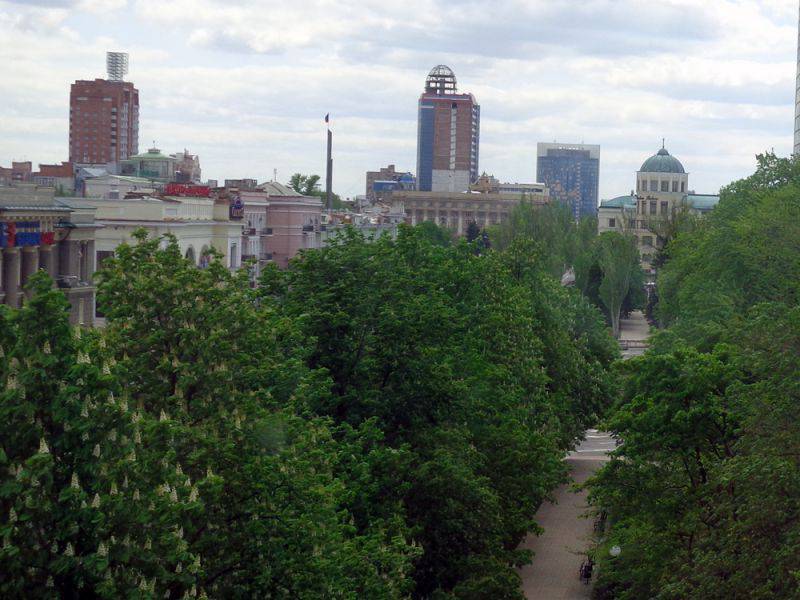 Fresh, but rather dense greens - in Moscow it happens by the end of May. Spring New Russia breathes the scent of flowering trees. And suddenly, in the midst of a celebration of nature, there are several ghost buildings with burned window openings. 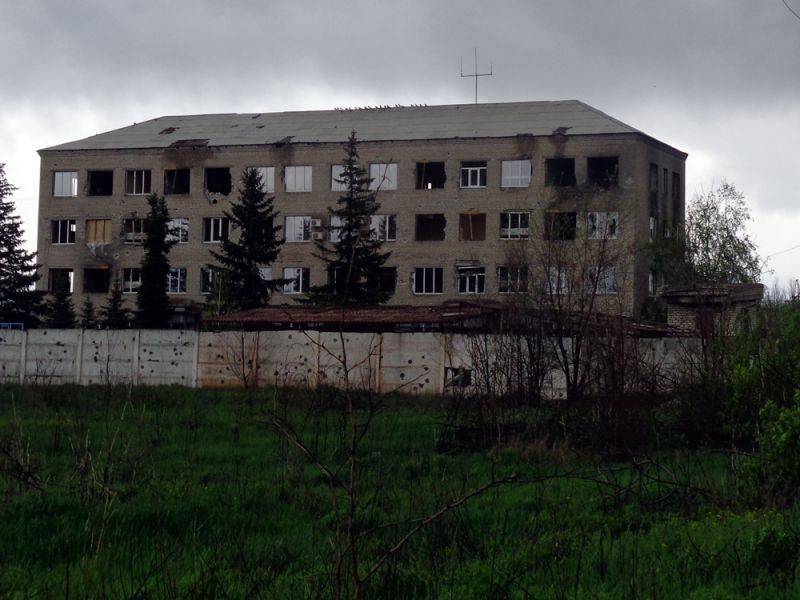 “Hero-City Ilovaisk,” says the driver. On the plate with the name really already attributed to paint: "Hero City". The private sector - neat houses with landscaped gardens. But no, no, and there will be a house with an exploded roof - the consequences of the war. 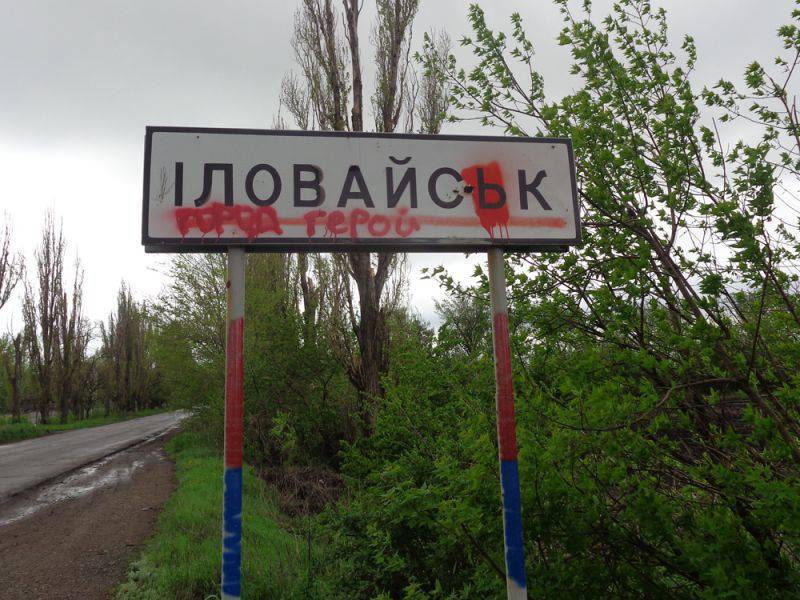 Again, green trees, flowering pears, pyramidal poplars ... And then the car drives into Donetsk. I am going as a member of a delegation of Eurasians who are bringing a new book by the political scientist Valery Korovin “The End of the Ukraine Project” to the New Russia. 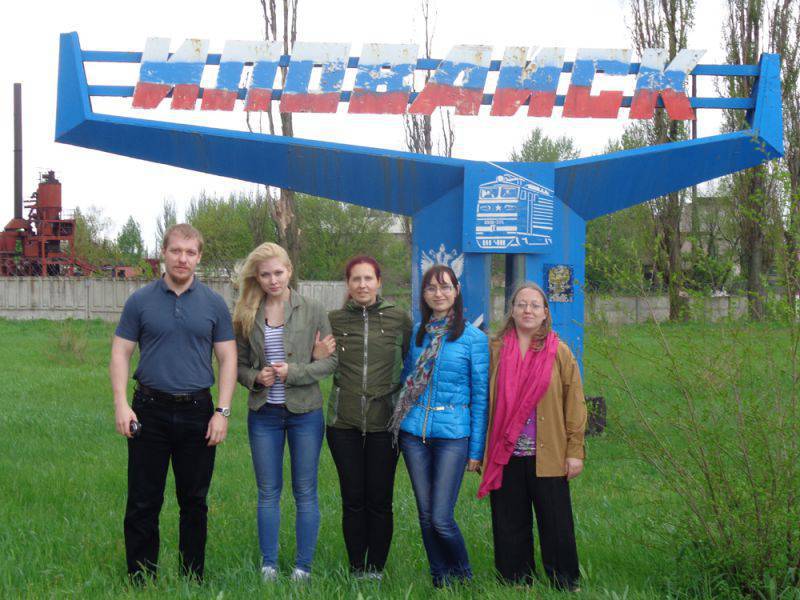 The first thing that strikes the DNR in the capital is the cleanliness that is incredible for the situation. "As if there was no war." Chestnuts and lilacs are blooming in the city. In the center there are practically no traces of war. But, as the accompanying people say, there are areas where it is impossible for people to live - a lot has been destroyed there and shelling by ukrokrateli is continuing from time to time. 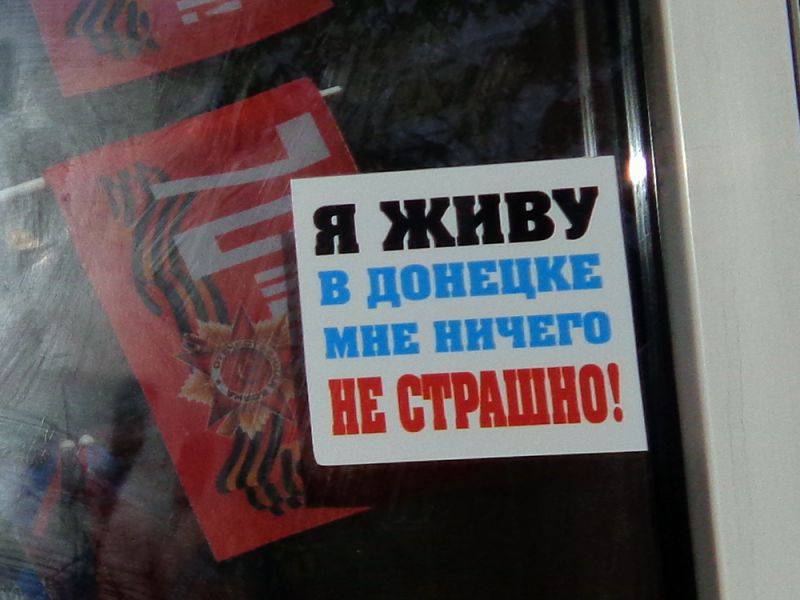 Monument to the Ukrainian poet Taras Shevchenko ... Public utilities ennoble the territory around him. Those who brought Donetsk a lot of suffering raised Shevchenko to the shield. They all over Ukraine destroy monuments that they do not like. But Donetsk does not fall to revenge of this kind, especially monuments that can not answer. 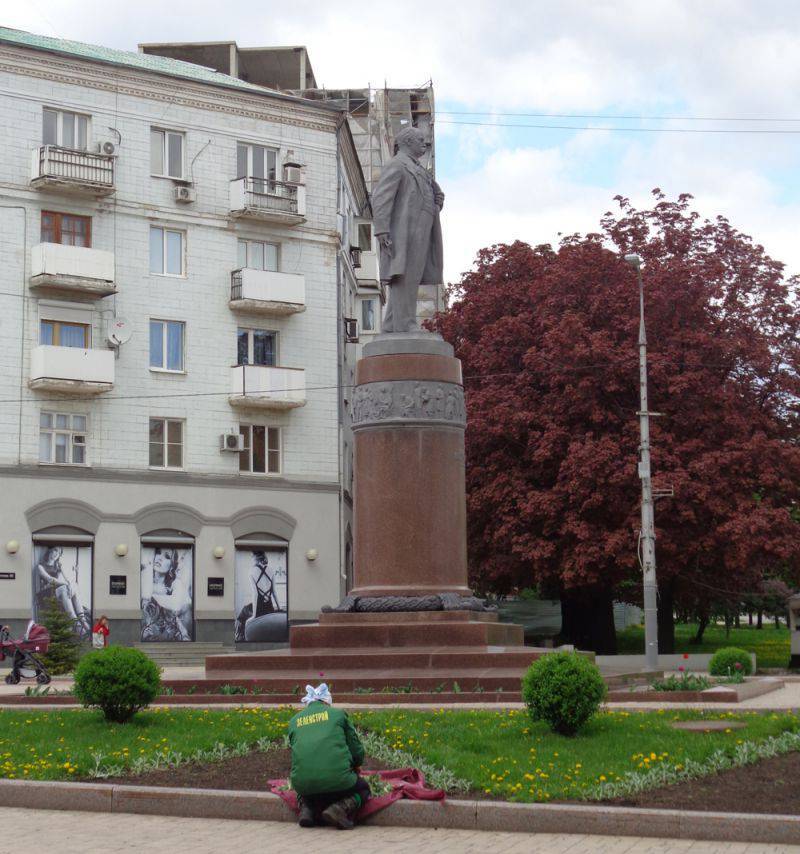 Sometimes the sounds of fighting are heard - in spite of all the Minsk agreements, the “dill” does not leave the city alone. But these gaps are rare and sound from afar, from the airport area. I have something to compare with — in Damascus, the war “sounded” much more clearly. “But in the summer it was a complete hell,” say the locals. In addition, it is said that on the night of May 4 shelling was intense. 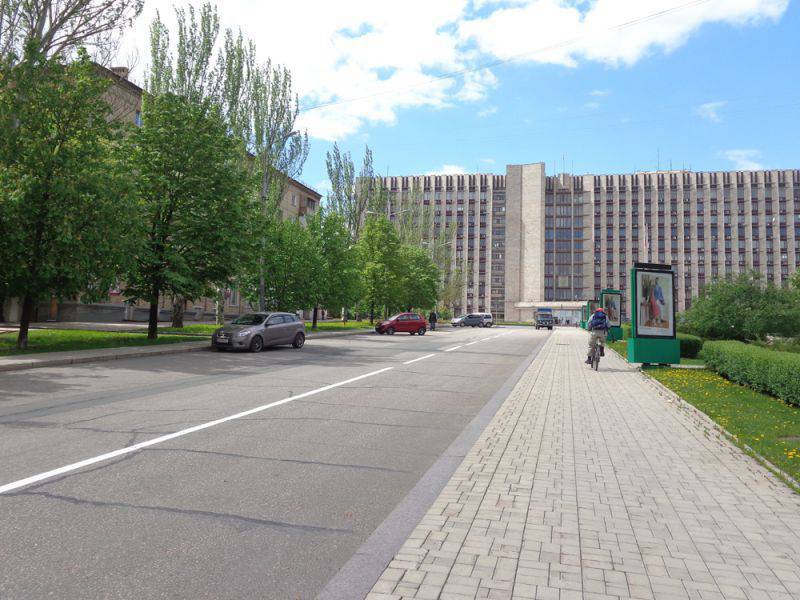 The building of the city administration (where, in fact, young Novorossiya was born in battles) has not yet fully disassembled barricades. Then, the Pitmen protesting against the Kiev coup dug up the paving stones and put up some protective structures from it. 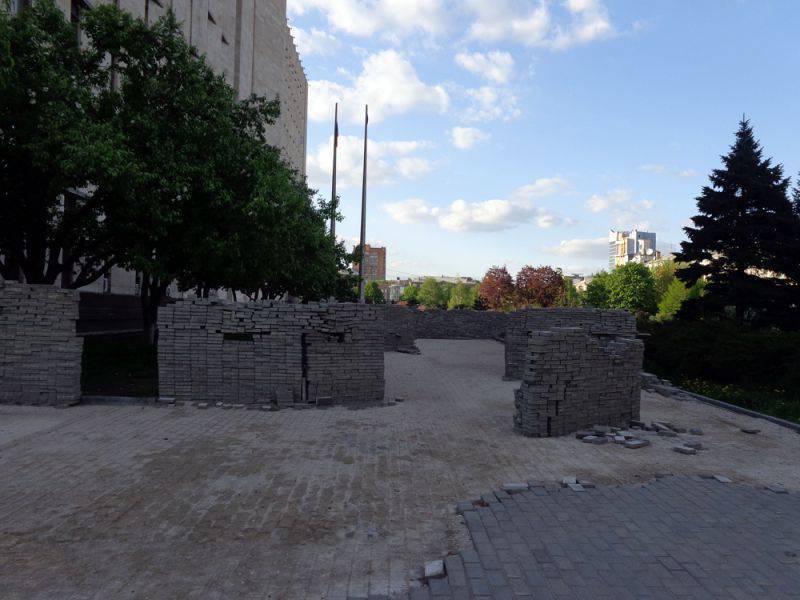 On the walls of the houses there are inscriptions "bomb shelter" and is shown by the arrow where to go in an emergency situation. I would like to believe that they will no longer be needed by residents. That the children of Novorossia will study, play football, see the sunlight, and not sit in the dark, in fear and confusion ... But it is difficult to pin hopes on the conscience of those who have repeatedly promised peace, and then started the war again. From Kiev politicians can always hear only threats against Donetsk, Lugansk and even the Crimea. 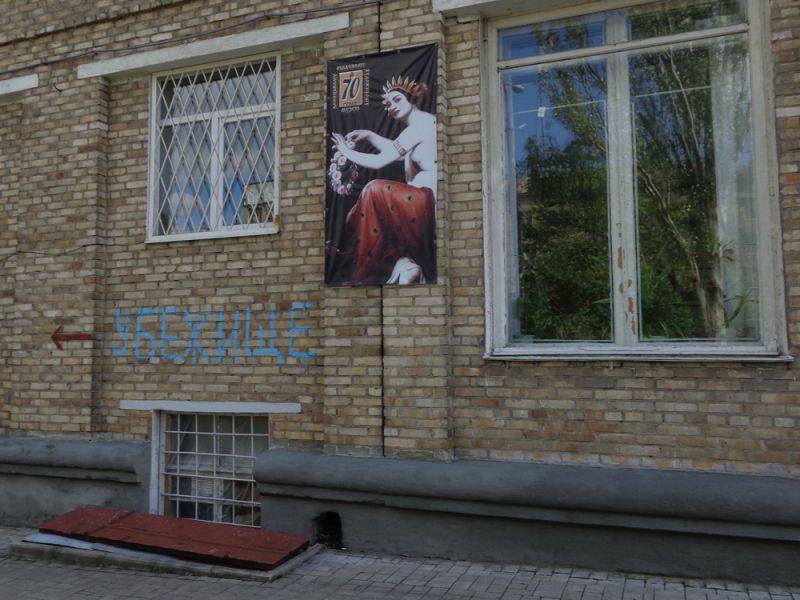 But the "war graffiti." The inscription "Glory to Ukraine", made by some svidomitom, crossed out. Instead, it says: “Glory to Donbass!” The Ukrainian flag painted on the wall is crossed out: “No, thank you,” say the residents of the city. 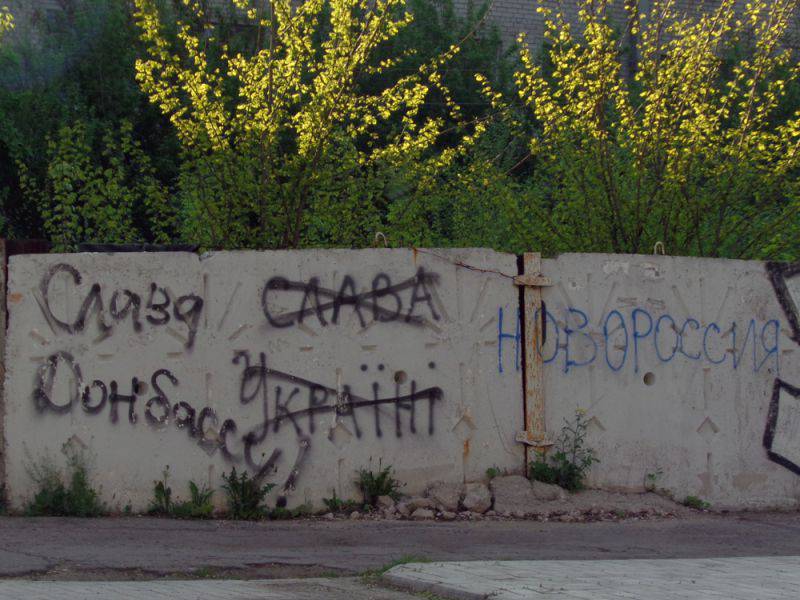 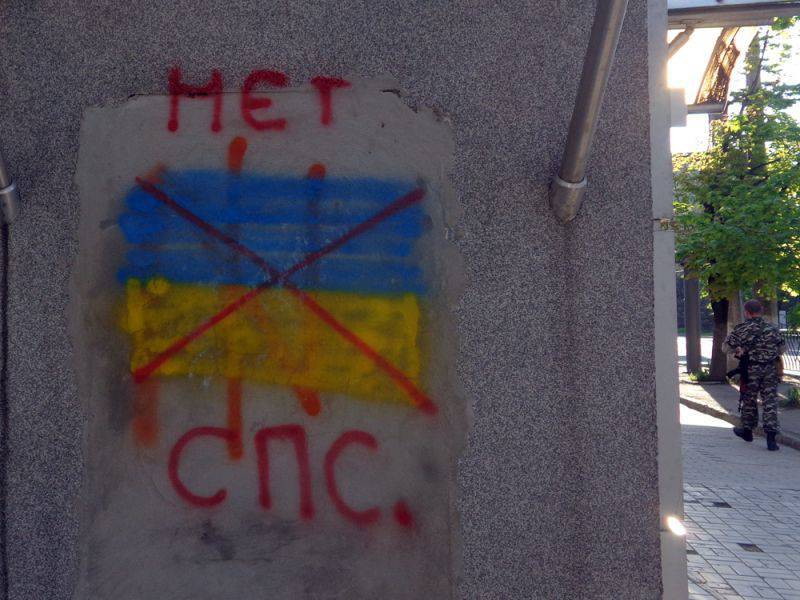 In the library named after N.K. Krupskaya with the support of the leadership of the People’s Council of the DPR, a presentation of the book by V. Korovin “The end of the Ukraine project” was held. Many people gathered - even the chairs were not enough for everyone. “Ukraine is a falling state, which we just have to push, because it is more and more actively flying to the abyss. From the last forces it mobilizes information resources, from the last forces it tries to attract people across the whole territory of Ukraine, driving them into the armed forces. But their collapse becomes more and more obvious, ”Andrei Kovalenko, head of the Eurasian Youth Union, said in his speech at the event. 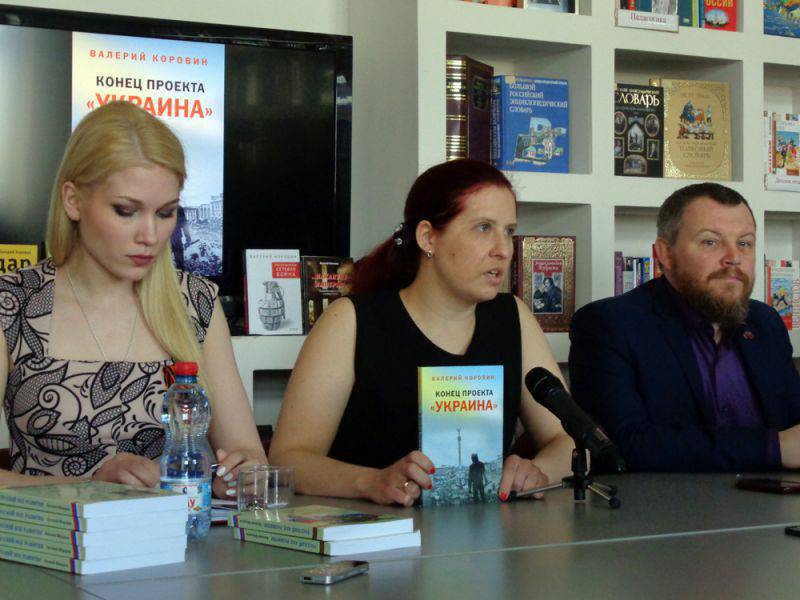 But, if Ukraine as an anti-Russian project is really rapidly decrepit, then the May New Russia looks young and fresh. Courageous Donetsk is preparing to celebrate the Day of the Great Victory 9 May.

It so happened that after the presentation our group was divided. Then we read news on “ukropovskih” sites: allegedly in the center of Donetsk there are automatic gunfire, and all people are hiding. We are surprised: just from there, and no hint of panic. It turned out that the pseudo-authors of this “news” were taken for the resumption of the war ... preparation for the upcoming military parade in honor of May 9. My colleague from Rostov, Oksana Sazonova, who was in another group, captured this pre-holiday moment: 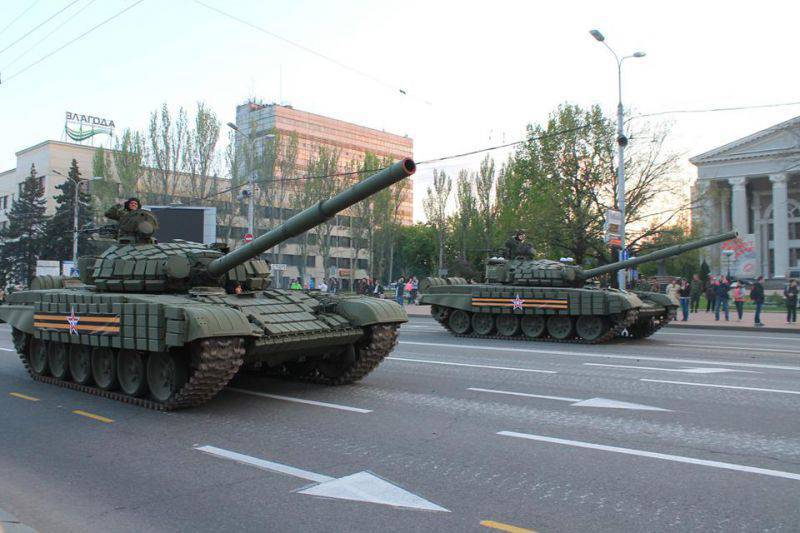 Ctrl Enter
Noticed oshЫbku Highlight text and press. Ctrl + Enter
We are
Ilovaisk. The big courage of a small townResults of the week. “A terrible holiday spirit was hovering in the air.”
Military Reviewin Yandex News
Military Reviewin Google News
26 comments
Information
Dear reader, to leave comments on the publication, you must sign in.