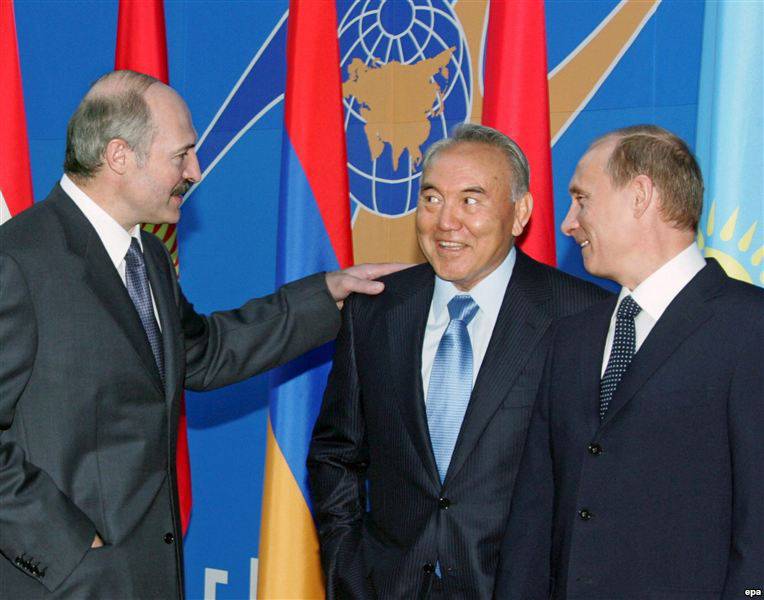 An event occurred that was dictated by the entire logic of the historical development of Russia and the process of globalization. Vladimir Putin announced a “new integration project for Eurasia”.


Especially for Izvestia, the head of the Russian government wrote an article - “A new integration project for Eurasia - the future that is born today”. The article talks about the Common Economic Space (CES) of the Russian Federation, Belarus and Kazakhstan, which will begin the work of 1 in January of 2012 of the year, its advantages and prospects. In addition, it talks about the prospect of creating - on the basis of the CES and the Customs Union - a single Eurasian Economic Union.

According to Putin, the new integration project will not be an attempt to recreate the Soviet Union, it is clear that there is no turning back, but unification on a new value, political and economic basis is “this imperative of the times”. Here Putin is absolutely right, the past cannot be returned, but unification is necessary, otherwise the post-Soviet countries will lose in global competition.

So, according to him, Moscow proposes to create a “model of a powerful supranational association”, which can become one of the poles of the world community and connect Europe and the countries of the East (Asia). In this regard, he by default confirmed the thesis that Russian civilization is the third major civilization of the planet, along with Western civilization and a conglomerate of Eastern civilizations.

The combination of human capital, natural resources, and financial resources of the Eurasian Union will help it to be competitive in the world, to survive in the global industrial and technological race (here you can add the race of advanced military technologies, armaments). The creation of the Eurasian Union will allow “ensuring the sustainability of global development”. The correctness of this thought proves itself история - The Russian Empire and the USSR have maintained balance in the world, contributed to the development of mankind, its progress.

According to Putin, the Eurasian Union will be an open project, ready to accept other participants and first of all the CIS countries. They are not going to hurry and push anyone, this should be an independent decision of the country, “dictated by its own long-term national interests.”

In fact, this is a statement of great historical importance both for Russia, its peoples, and personally for Putin. The fact that Russia is an “empire” and the Russian people is an “imperial people” (the core, the foundation for the integration of other peoples) is understandable. And the recovery process was inevitable. Putin, by his statement, “signed up” for a tremendous job, where he would really have to “plow like a slave in the galleys,” otherwise he would be crushed by the launched global “images”.

Of course, one cannot say that all interviews can be assessed only in a positive way. The usual for the current political elite of Russia words were said about the reluctance "to block oneself and oppose anyone", about building a “Greater Europe” from Lisbon to Vladivostok, “united by common values ​​of freedom, democracy and market laws”. In addition, according to Putin, joining the Eurasian Union will help "each of its members to integrate into Europe more quickly and in stronger positions."

Thus, global crisis processes have nevertheless shifted from the dead point the process of reunification-integration, at least part of the wreckage of the Soviet Union. It is clear that the second wave of the crisis, which, according to a number of experts, will overwhelm the planet in 2012-2014, will be even tougher and will force other countries of the former USSR to follow the path of integration. There is simply no other way out - unification or death in a global fire.

It is obvious that Ukraine, Azerbaijan, Georgia will not be taken into the EU, however much they want. The European Union, or rather Berlin and Paris will solve the problems of their survival (they are already solving), they do not need such companions. There is no chance of survival, alone and in the republics of Central Asia.

If Vladimir Putin can really solve this problem, he will go down in history as a great person, a statesman. But, it should be noted that to create the "Eurasian Union", a lot of work is needed. In fact, it requires new industrialization, dozens, hundreds of projects aimed at development. Without this, there will be no real integration, there will be empty talk, as it was with the “Putin’s plan”, “modernization”, “innovation”, and “nanotechnology”. On a single sale of raw materials, such a project does not pull out. Yes, and people should be inspired by a certain idea, on the idea of ​​enrichment, “Eurasian unions” are not built.

But such programs in Russia are not yet visible - education and science continue to degrade, the worst situation in the field of the moral state of the people, a lot of questions to the military, technological, food security of Russia. The society is affected by a mass of social diseases. A huge problem in the demography of the country.

It is also necessary to clearly realize that the creation of the Eurasian Union will not save the planet from a systemic crisis, the disease has taken too deep roots. Humanity must have had a disease, no lotions that relieve symptoms, the disease will not cure. A new integration project in the open spaces of the USSR should help the multinational Russian civilization survive, save itself.

We are in Yandex Zen
Astana should become the capital of the Eurasian Union: Nazarbayev’s reply to Putin
Vladimir Putin: New integration project for Eurasia - the future that is born today
15 comments
Information
Dear reader, to leave comments on the publication, you must to register.