A little bit about the "struggle for Ukraine" 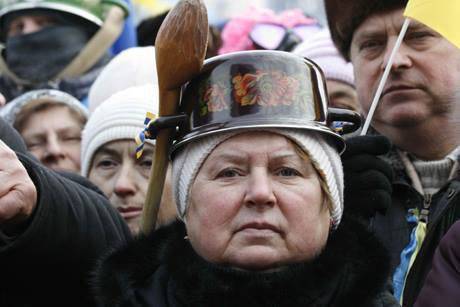 Recently, there have been two points of view:

There are also “third” forces, but for them the Ukrainian question is far and unimportant. For Russians and Ukrainians, some form of antagonism and paradox is clearly developing. The victory of the Maidan and the subsequent events are reasonably “hung” on the western “puppeteers”. Naturally, the defeat in the “battle for the minds of Ukrainians” should be determined by Russia. Many people admit that the “puppeteers” have worked and worked too professionally today, as opposed to Russia, which was able to help only a very small part of Ukrainians (or even abandoned everything and everyone).

Strictly speaking, the stories that Russia owes something to someone permanently, as well as about its permanent backwardness in everything, are almost always heard which historical period do not take. Let's first consider the “failure of pro-Russian politics in Ukraine.” It seems to many that while American (and not only) billions worked for anti-Russian forces, those people who were supposed to be responsible for “pro-Russian Ukraine” were inactive or acted very inefficiently and terribly unprofessional. I’m very interested, but where is the name of the “organization” that is professionally responsible for the mood of the people of China or Belarus, Kazakhstan or Turkey ?! And many other countries where Russia has permanent geopolitical, military and economic interests. What are the “events” to improve relations with Russians in Poland, Germany or Japan ?! All this is demagogy!

There was no interference in internal Ukrainian affairs and was not required for 23 for a rather trivial reason — there were no mass anti-Russian sentiments ... Even in Western Ukraine there was nothing like the current hysteria with “moskalyaku to gilyak”. Yes, Bandera was revered there and they didn’t like Russians, but nobody rode with guns to kill people in the Donbass. The situation is similar to the “predominant” situation in Kazakhstan, for example. There are their “lovers and non-lovers” of Russians. But the majority of the Kazakhs still laugh at those who shout “the glory of Russia” and the “shame of Russia”, having no desire to either fight the Russians or unite. The realities of Ukrainian public "domaydannoy" life were very far from the current confrontation and therefore it is not clear what exactly and for what purpose would be needed "strengthening of pro-Russian sentiments"? 90% of the country had no complaints about Russia, many worked quietly there, went to visit relatives, worked for Russian enterprises in Ukraine, and if we consider that Western Ukraine is uneven in its relations, then what is there, these notorious "pro-Russian sentiment ”, if not“ homeland Ukraine ”?! You can talk a lot about the features of culture, which was rolling toward Ukrainization, but this is a natural process after the collapse of the USSR. In Ukraine, no pro-Russian TV channels or societies were required to open, there was a sphere of Russian media space there anyway, and in Kiev more Moscow channels could be seen than in the Urals! There the same Russians lived! It is the same as to open a pro-Russian society in Ryazan, and in Helsinki-profinskoe ...

Now look at the "time of the Maidan." Media companies are launching mass EU advertising and vehicle denial. For the first time, we hear with shock “moskalyaku to gilyaka”. But even at this moment, the moods of the maydanovtsy themselves are not anti-Russian, but against the power of Yanukovych. Separate groups of Nazis look like an eyesore. Only in the final phase of the Maidan, did they unite with Europe directly to associate with opposition to the whole of Russia. How is this achieved? A large mass of media began to aggravate the situation and exaggerate contradictions with Russia. Russia was first shown as a specimen of the bright enemy of everything Ukrainian. And after the junta's victory, such a vision of the world order became mandatory, with which the newly appeared attack aircraft looked after successfully, first on the Maidan, and then around the country. Any dissent was sharply suppressed, and the “right” was as actively encouraged. It was not very difficult to do this, the technologies were worked out. But even these technologies fail, recent examples are Turkey and Syria. Everything was done in an extremely unprofessional manner, and only the even greater lack of professionalism of the authorities helped the junta. Even so, literally saved the junta from failure!

Probably, if Russia was preparing a coup in Ukraine, it would likewise pay for channels and websites, bribe some officials, conduct active propaganda in the South-East. In this case, a conflict of interest would lead to hot backstage games and battles for each program or detachment of activists with western counterparts. The problem is that Russia did not plan and did not prepare a coup, Yanukovych was quite happy with her, whose victory in 2010 did not take place without Russian intervention in the Ukrainian policy of Yushchenko who did not suit Moscow. So, Russia could not oppose the "puppeteers"; there were no tools except for force intervention. However, until the very last moment, there was no need to pose such a question! The security forces were in complete control of the situation, even despite the direct betrayal of the SBU and the pressure of the West. Even at the most critical moment of the last day, if President Yanukovych gave the order, the Maidan would not have lasted even hours, the media paid by the “puppeteers” would soften the rhetoric under the pressure of an established regime and everything would end up with some compromise with the authorities, most likely elections. Then all the multi-billion dollar expenditure of "puppeteers" would go to the dog's tail. A "protect democracy" in Ukraine, Russia would not allow, as in Syria.

It is this fact of scant chance of success that gives the right to speak about the extreme lack of professionalism of the “puppeteers”. Even the superbly trained “street patriots”, all of their repeatedly tested and proven technologies of coups and provocations, could not even stand up close to the normally organized police forces. The planned flow of anti-Russian rhetoric was obtained only by direct force influence on the media after the junta’s victory, which alienated many. It was not possible to rally the country against the "external enemy" -Russia, under the "wise leadership of the West." The “puppeteers” did not take into account too much, the execution was too lame, the forecast and the reaction of the population turned out to be too erroneous. Instead of the “second Baltic States”, they received a bottomless financial pit and an economic war with Russia, where they also suffer one defeat after another ... Instead of the “Orange Revolution”, there is a civil war with devastation. And this broken Ukraine is no longer worth the investment that was made in it. All hopes associated with it have collapsed and no longer receive any preferences in the military, economic or political sphere.

Russia did not lose the “battle for the Ukrainian soul”, it did not show up for this “battle”, because they did not call there! This “battle” was lost to Ukraine and its inhabitants. And as the losing side, they pay indemnities and give the legitimate “trophies to the winners”. The only state that could really help Ukraine was declared an enemy by the Ukrainians. They will have to pay for it! No, not dead Nazis or patriots, under Russian caterpillars tanksand they will pay with the collapse of the economy, a critical drop in living standards, the complete collapse of the country and population, the disappearance of their culture. They are already paying ... And these are not the problems of Russia and Russians, these are the internal problems of Ukraine. Russia does not yet have the right to introduce its army, nor does it have the right to “fight for souls” in Ukraine, no one asks for it! This right and opportunity lies with the residents of Ukraine, no matter who they consider themselves-Russians, Ukrainians, Europeans, Mongols, etc. .. I like to listen every day about the impending European happiness, please, like every fire in Russia please, please. Only this is your purely Ukrainian choice and there is no need to drag the West and Russia for it. Because Ukraine, which has not met expectations, is not needed in the West either. Only tear out of it all that remains to at least partially offset the costs.

That's the whole "victory of professionals", which looks more like a rout. No goal has been achieved, vast resources have been wasted, the future is unenviable. And the losing Ukrainians are now clapping their naive eyes and asking about Santa Claus. They are completely entitled to their own opinion, but the 24-year-old boy, riding a wooden horse with a wooden saber and sincerely believing that he is “wide Cozack”, causes not affection, but thoughts about the ward in a closed medical institution ...