“Labor Man” becomes an unnecessary element of the system. 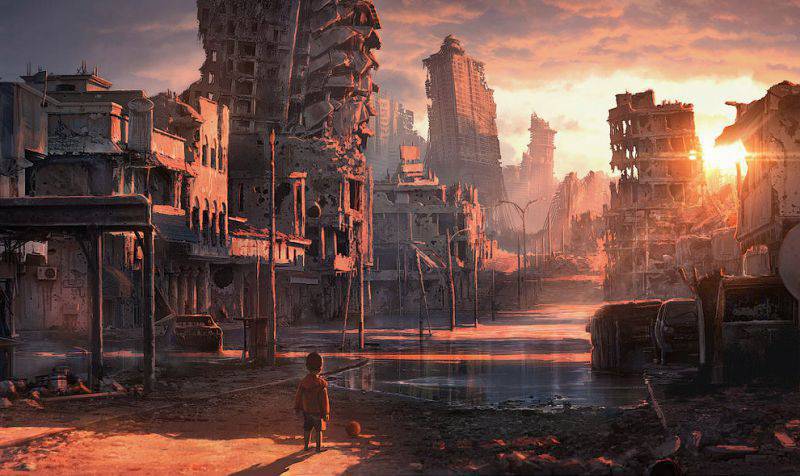 The world of the future will not need exploitation in the usual sense. No trade unions, protection of the rights of workers and other struggles for the standardly understood justice in economic activity will not help.

Seventy years ago, the Soviet Union did not have an atomic bomb. Victory was ahead, but there was also devastation, general mobilization, a destroyed and militarized economy, as well as enormous human losses.

But they did not create an atomic bomb. And there was another country, which by this time already had this trump card. The atomic bomb is not just a leaflet with formulas. This is a technological and production cluster. These are advanced developments and huge uranium enrichment plants, this is a mass of related technologies, almost all of them are resource, energy and knowledge intensive.

The Soviet Union was able to understand the priorities and was able to solve the task posed - to ensure nuclear deterrence. Although in the 40s, a few people knew that a large part of the country was working on the creation of an atomic bomb.

Try to present in our time a task comparable in importance and at the same time in complexity with the creation of an atomic bomb in 40's. Is the state obliged to tackle such a task, despite the technological lag and a host of other problems?

In my opinion, it is obliged, and there is such a task. Or rather, these are two interrelated tasks - technological and social.

The world is on the verge of a new socio-economic structure. The so-called labor productivity is growing, and with it the overproduction. An ever smaller percentage of people provides the rest of the population with everything they need. Social systems and economies are finding increasingly sophisticated ways to ensure mutual benefit and mass employment.

The turning point will come when the primitive types of work that require human participation today can be performed by mechanisms. And it is obvious that in the coming decades a universal robot will be created, capable of the widest range of work - from the builder to the waiter and cleaner. The appearance of such a robot is no less important than the creation of an atomic bomb.

You can simulate the consequences for different areas of public life, but one phenomenon is fundamentally important. Human labor in the vast majority of fields of application will receive a negative value.

Simply put, people will finally not need each other. What has been present and developed since the beginning of civilization will move to a qualitatively new level.

The system formed around the redistribution of the excess product, provided for the need for the participation of human labor, and such a need was and is the basic element of the current system.

The very concept of "labor productivity" will turn into a fiction if it becomes difficult to press a button. With the advent of the universal robot, a person will finally lose the function of selling his work, remaining only a potential consumer. Billions of people will lose the opportunity to offer something to each other.

In a certain sense, an economic “zombie apocalypse” will arise, caused not by illness, but by total uselessness. Billions of unnecessary to each other and the system of human individuals seeking food and socialization.

Pay attention to the popularity and abundance of films about “zombie apocalypses”, as well as dystopian films, in which the main part of humanity leads a beggarly existence, despite the rapid development of technology: all these “Resident Evil”, “Hunger Games” and “Oblivions” .

I thought it was just an artistic premonition, but now I think that in addition to the creative part, technologies like “self-fulfilling prophecies” and “Overton Window” are also involved.

All these films are not just fantasies, but quite realistic sketches on the theme of the world of the future, which prepare and train us for this future. Their realism is not in detail, but in principle - billions live in chaos, units enjoy life.

It is fundamentally important to realize that the world of the future will not need exploitation in the usual sense. No trade unions, protection of the rights of workers and other struggles for the standardly understood justice in economic activity will not help. The point is not to operate, but to wither away its necessity.

“Labor Man” becomes an unnecessary element of the system. Mutual need will arise only when moving to a lower stage of development - how savages take their place in the tribe, but are useless in the city.

During the transition period, the system controlling the creation and operation of universal robots will realize and increase its economic advantage and technological gap. At the same time, the political, moral and technological basis of segregation and “clearing” the world from “extra” people will be created. Owners and creative and highly skilled personnel serving them will clear the living space for themselves.

The main global instrument of regulation of the system will be war. Countries that are not members of an elite club will not even be suppliers of resources (this is because — since), but a testing ground for a war of a “production and utilization” nature.

The war should absorb the “extra” human lives from both sides, compensate for the total overproduction, give controllability and meaningfulness in the transition period. In addition, it must draw a dividing line between the Hellenes and the Morlocks of the future world.

With the proviso that the “morlocks” of the future are just extra human material to be disposed of or funny savages like Australian aborigines and tribes in Amazonia, and not an object of exploitation.

After going through the “transitional” period, a system of new “Hellenism” will probably be formed, based on the ownership of certain privileges - the right to land and in general resources, including rights based on membership in the group controlling resources and technologies. The bottom layer will be professionals who can perform highly skilled or creative work.

The economy will be closer to the feudal system with its closed-cycle natural economy, where it is not the market that is important, but control over sufficient resources and the ability to protect this control (or swear to a strong overlord). In this case, the place of the "people" will take robots.

It is important to realize that in a system based on private ownership in production and finance, control over resources and the environment, in the event of loss of the value of human labor, the development of a situation apocalyptic for the majority of the world's population is inevitable. The exchange of labor is replaced by the provision of access to controlled goods.

The only defensive mechanism - the system of democratic elections, which creates the value of the owner of the “voice” - has practically lost its significance due to the development of manipulation technologies and the boundary conditions of the “elections”. In the idea of ​​destroying “quilted jackets” that captured the minds of Ukrainians, I see the participation of specialists working out the technology of separating “extra” people into mutually annihilating parts.

An alternative future may only be the one in which a counterbalance system has been created, based on other principles of social order, which would imply the absence of the need for depopulation and the disposal of “extra” people.

Attempts to oppose systems based on the same “market” principles will not change anything, the overall development of the situation will go the same way. Just as attempts to stop technical progress are doomed to failure.

Returning to today's realities and interrelated tasks (technological and social), currently facing, we can formulate the following:

1) Those states or a union of states that do not want to be a victim of a “robo-apocalypse” and expect to retain their existence should acquire a modern analogue of the “atomic bomb”, are obliged to ensure the development of their own cybernetics, including component and program level, as well as energy supply issues. .

Creating your own IT-base and universal robot should be a modern “nuclear project”. The processor plus the program plus energy is a universal robot. A project of this kind is a matter of survival.

2) Such a state should ensure the formation of an economic model capable of functioning in conditions of negative cost of mass labor while maintaining and developing the population level.

This model should combine the realization of the positive role of the small owner and entrepreneur with state control or ownership of resources, system-forming and infrastructure enterprises, and the public habitat.

The state should ensure the generation of socially significant and approved tasks, the participation of the broad masses of the population in the solution of which should form the basis of the consumption system and the differences in its level. A necessary condition for such a system is state control over the financial system and the estimated nature of the budget.

In ideological terms, such a state should be the exact opposite of social Darwinism. Must assume the value of human life is not in the criteria of "success" and conditional utility for others, expressed in the amount of money received, but the value of life as a "thing in itself".

The socially recognized value can be the development of each individual, and the system of education can be lifelong. The basis of this approach may be official religious syncretism. A union of the BRICS type may well cope with such a task. If it is formulated in time.