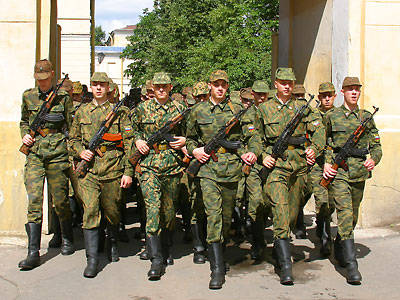 An epidemic broke out in our army due to poor conditions of soldiers.

In one of the Russian army units, an epidemic of ARVI and pneumonia broke out, as a result of which two conscript soldiers died. According to parents of employees, in terms of terrible conditions of detention, there is no hot water and medicines. That is why, they say, the order is already 600 people. For their part, the official departments refute these figures and argue that the situation is under control.

An outbreak of acute respiratory viral infection (ARVI) and pneumonia occurred in the military unit number 20115 in the city of Ostrogozhsk, Voronezh Region, Russian media reported. As a result of the epidemic, two soldiers died.

There is no reliable information about how many soldiers are infected. Official data and data from unofficial sources are extremely controversial. So, journalists referring to their own sources write that they got infected from 120 to 600 soldiers, while representatives of the army claim that these figures are several times too high.

So, according to the Life News portal, about 600 soldiers turned out to be infected with the infection. In turn, the head of the press service of the Western Military District (ZVO), Colonel Andrei Bobrun told the Interfax news agency that only 40 soldiers were hospitalized with a diagnosis of ARVI.

And Colonel Alexander Tsybulnikov, the commander of the 20115 military unit near Voronezh, told reporters that there are 114 soldiers with a diagnosis of pneumonia in the hospital. In total, according to him, at the moment, 182 people are hospitalized from parts of the hospital. Among them, 114 people have pneumonia, 68 - bronchitis, and the rest - ARVI.

Commander Tsybulnikov assures that he has already reported his leadership on real numbers. However, judging by the official reports sent by the Ministry of Defense, they most likely did not have time to get acquainted with the report.

At the same time, the incidence of soldiers seems to be massive. This is evidenced by the data of the Committee of Soldiers' Mothers. “We really receive dozens, hundreds of complaints from parents of servicemen who are on the territory of this unit,” commented Galina Tretyakova, a representative of the Committee of Soldiers' Mothers. - People talk about the epidemic epidemic of pneumonia. The number of cases of the disease has not yet been precisely determined, but we are talking about hundreds. ”

As it turned out the publication of Life News, the lack of hot water and the lack of medicines for the treatment of colds caused the mass disease of the military. The parents of the soldiers told the portal that there is not even a soul in the unit, only once every two weeks for conscripts they drown the bathhouse. Of the drugs, patients take only antipyretic tablets, which have no effect, except for a temporary decrease in temperature.

At the same time, doctors believe that the commanders of the Ostrogozhsky unit independently tried to treat the conscripts in their own medical unit until the two soldiers died. That is, the leadership of military unit number 20115 until the last time tried to silence the outbreak, without reporting the growing number of patients every day, even to his army superiors.

Patients were urgently taken to the medical unit, where local paramedics, who were trying to cope with the disease with available medicines, began their treatment.

The deputy head of the Voronezh Region Health Department, commenting on the current situation, wonders why the command of the unit was so delayed with a report on patients - the epidemic could be brought under control, with the help of professional medical staff in time.

“Only now we have learned about 20 soldiers with signs of acute respiratory illness and pneumonia who were treated on the territory of the unit. We were assured that they are not heavy, ”said Leonid Meremyanin, first deputy head of the Voronezh region health department. “It has now become known that they not only hid a massive disease, but did not even report the corpses to the Ministry of Health!”

The Ministry of Health reported on the death of only one soldier, confirming that he died right on the territory of the unit. And the guy was not hospitalized at the first sign of pneumonia, like a few dozen of his colleagues.

According to the sister of the 20-year-old soldier from Kaluga, there is a shortage of medical staff in some units. “My brother spent a whole month in the hospital with acute bronchitis, only recently he was transferred to a unit,” says Marina P. “By phone, he told us that not only conscripts are sick, but officers too. One of the officers is in serious condition, like about seven other servicemen. We are worried, because for a week we have not received any news from him. ”

In turn, the military prosecutor of the Voronezh garrison, Alexander Zaryayev, told Interfax that the incidence rate in the military unit in Ostrogozhsk does not exceed the average statistical norms. According to him, the epidemic is associated mainly with weather conditions. “There are no soldiers in grave condition,” says Zaryaev. Currently, the fact of the death of two soldiers is being checked - it is established whether negligence was in the actions of the medical staff, the leaders of the military unit.

According to the prosecutor, a resident of the Tula region, who served in military service in Ostrogozhsk, died of pneumonia in a military hospital in mid-September. In July, in Voronezh Military Hospital, another soldier died in the same unit from meningitis.

The Investigation Committee of the Russian Federation on Thursday also reported that the military investigation department of the UK for the Voronezh garrison conducts pre-investigation checks on the facts of the death of two conscripts in this military unit. According to the ministry, at the end of August 2011, Private Bogdan Efanov, with suspicion of ARVI, was placed in a detention center of a medical center. In early September, he was transferred to a military hospital in the city of Ostrogorzhsk, where he was given a preliminary diagnosis of acute bronchitis, and then to a hospital in Voronezh.

As noted in the UK, despite the efforts of doctors, to save the soldier failed. 16 and 16 September he passed away. According to preliminary data, the cause of death was "progressive cardiopulmonary failure."

According to the ministry, 9 July 2011, a cadet of the automotive training company private Alexander Smirnov, being in the location of the military unit, felt unwell and weak. In the first-aid post, he was given a preliminary diagnosis of “acute respiratory viral infection, acute rhinitis,” it was later established that the soldier had a meningococcal infection. In the evening of the same day, the patient’s state of health deteriorated sharply, and a few hours later he died from cardiac arrest.

SC will check the actions of the attending physician Smirnov in the provision of medical care. The conditions of service and residence of military personnel on the territory of a military unit in Ostrogozhsk will also be examined. According to the results of the inspection, the SC will decide on the initiation of a criminal case.

Epidemics in the army have become commonplace

Recall that the epidemics of pneumonia and ARVI in Russian military units occur regularly. So, in January in Chebarkulsky garrison in the Chelyabinsk region there was a surge in the incidence of conscripts: one of them died of meningitis, even more 60 people were hospitalized with a diagnosis of pneumonia.

The same winter, a similar epidemic occurred in the Chernyakhovsk garrison in the Kaliningrad region, where more than 20 soldiers were taken to the military hospital with pneumonia. The cause of pneumonia was the unheated barracks where the soldiers lived. In Mordovia, 26 recruits serving in Saransk were also urgently hospitalized in the Republican Infectious Diseases Hospital with fever and headache.

We are in Yandex Zen
As I was rooting for ours, or Report with a hot head
27 comments
Information
Dear reader, to leave comments on the publication, you must to register.