Import substitution from Ukroboronprom: "Stugna-P" instead of "Javelin"

March 20 2015
64
The management of "Ukroboronprom" report that the corporation is switching to mass production of "Ukrainian analogues of the Javelin complex." We are talking about the Ukrainian anti-tank missile systems "Stugna-P", which "Ukroboronprom" intends to send under contracts to the Armed Forces of Ukraine and units of the National Guard. Edition "Press of Ukraine" quotes the words of Roman Romanov, representing the Directorate of Ukroboronservice:

We have already begun mass production. Systems ordered by the Ministry of Defense, the National Guard, will be actively used. 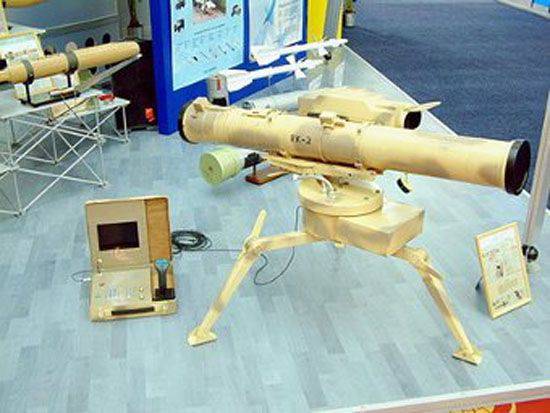 "Stugna-P" - anti-tank missile system, adopted by the Ukrainian army in 2011. ATGM designed to defeat armored vehicles, including tanks. ATGM “Stugna-P” in certain conditions can be used for air targets - for example, helicopters. Firing range ATGM up to 4 km. Target detection range - up to 6,5 km, recognition range - up to 2,5 km. Penetration - up to 800 mm (homogeneous armor). Control system: on a laser beam, with target tracking in automatic mode or from a remote control, on a TV channel.
Ctrl Enter
Noticed oshЫbku Highlight text and press. Ctrl + Enter
We are
Anti-tank missile system MMP (France)Compact strike: American portable anti-tank weapons
Military Reviewin Yandex News
Military Reviewin Google News
64 comments
Information
Dear reader, to leave comments on the publication, you must to register.