March 6 2015
155
The idea of ​​Deputy Prime Minister Arkady Dvorkovich about the possible transfer of strategic oil and gas fields to companies from the PRC is so much controversial as the gas “contract of the century” recently concluded with the Chinese. First, the Chinese are invited to start up on the already developed deposits. In the world, almost no one does. A potential investor is usually first invited to invest in exploration, infrastructure and other things. Here, Russia has already spent and created everything itself, and the neighbors are invited only to collect the most delicious. Secondly, companies from the PRC are invited to admit to the controlling stake - something unprecedented for a formally independent country, which also proclaims itself to be a great power. 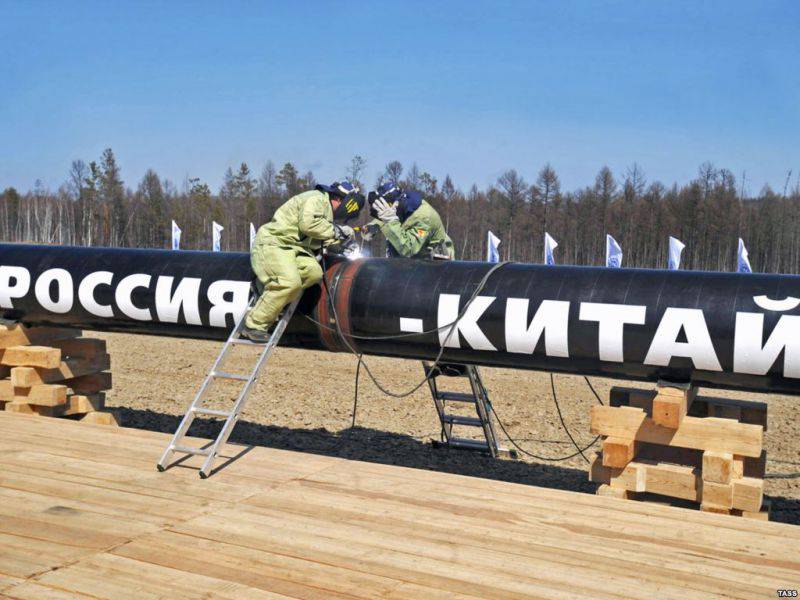 Well, the third, the most interesting. Chinese companies will most likely not want to deal with Russian workers and specialists, but will deliver their own, as they do in Kazakhstan and other places. So they are more convenient and economically much more profitable. The appearance of such a large number of Chinese people will change the entire look of the surrounding area, especially if specialists come with their families. Here and public institutions on the Chinese model, and hieroglyphic signs on the roads, as well as Chinese cuisine, Chinese medicine and so on. Welcome to Chinatown with your customs, practices ... and laws. Chinese cities in Russia will have their own world. To understand what is going on inside it will be completely impossible. The experience of so many countries shows that places of compact residence of the Chinese diaspora are becoming a considerable problem for local authorities.

Of course, China is an extremely important partner for Russia, and will remain as such for the coming decades. With the great Asian giant, it is possible and necessary to develop relations in all directions, regardless of the presence or absence of sanctions.

And what does the highest authority in the person of Vladimir Vladimirovich Putin say about such ideas? The correct answer is nothing. Appealing to the head of state makes no sense for two reasons. First: Dvorkovich’s proposals have not yet been formed as a concrete bill - that is, there is nothing special to criticize. And the words at any time can be disavowed, they say, not so understood. Secondly, after “partner Poroshenko”, “united Ukraine” and “Nabiullina act correctly” such appeals hardly make sense for obvious reasons.

Of course, one can argue that the Chinese diasporas exist in other countries, and are very numerous. Yes it is. But almost all of these countries are very densely populated by representatives of the titular nation, and the Chinese minority is not a big threat there. In Russia, the situation is somewhat different. Where is the guarantee that in the event of a critical weakening of the federal center in Moscow, the Chinese will not decide on the conditionally-Crimean scenario already in the territory of the Russian Federation itself? That is, the appearance of "polite people" with a Peking accent and a referendum for joining the People's Republic of China.

Panicking, some will say. Maybe. But a sane person should always consider the worst scenario as the most likely.

In general, China is the ally, about which they say that with such friends enemies are no longer necessary. The leaders of this country have a very changeable temper, and the Chinese treachery is known to all Asian neighbors of this country. Now, China openly uses the fact that Russia is in fact in a state of cold war with the United States and the EU in order to dictate terms to it. With all the reality of threats from the West, it is unwise to rush into the arms of China on frankly humiliating conditions.

Unfortunately, Russia has long been selling resources and electricity to the Middle Kingdom cheaper than its own consumers. Also, our country gave way to the southern neighbor of the island on the Amur, without setting any special conditions. The implementation of the current "brilliant initiatives" of Dvorkovich runs the risk of finally and irrevocably turning the Russian Federation no longer a vassal, but into a frank colony of the PRC. Therefore, when Arkady Vladimirovich repeatedly repeated about the “Chinese friends”, it was tempting to ask how good the relations with them were - like in the recent past with “fraternal Ukraine” and “American partners”? And if so, then what should unhappy Russians do - dig dugouts or immediately acquire Mao's quotations for memorization?

Such a seemingly suicidal policy of the Russian authorities can only be explained by one thing: before a high probability of a coup d'état, someone leads bargaining for a safe harbor in the Middle Kingdom. Well-known politicians can boast in front of television cameras that they are read in works on the reforms of the great leaders of the past, but for some reason the face of False Dmitry, Peter III or Gorbachev is always reflected in the mirror.