Europe is waiting for help from the BRIC countries 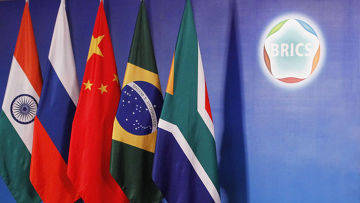 Outside there is a rather gray autumn, almost the same as in the European financial markets. For many, the objective reality was that very soon the European economy could fall into a sharp peak, if the hand of friendly financial assistance was not extended to the Old World. But where can we expect this kind of help if the whole world is literally reeling in the economic sense of the term. Under current conditions, it is absolutely pointless to rely on the USA, since the American financial system itself is in a state of faintness and often indulges in agony attacks. He hopes for himself, that is, for finding, so to say, internal reserves - it is the same as trying to pull oneself out of the swamp by the Munchausen way: although the hands are strong, the body has too deeply sat down in the crisis mass. It turns out that Europe needs to ask for help from someone else.


And in this situation, one of the options for exit can be considered "fraternal" assistance of the BRIC countries, which include China, India, Brazil and our country. In such a situation, the Europeans embarrass themselves. Well, you just judge for yourself, in order to at least somehow continue the development of a united Europe, they will have to ask for help from those countries which, according to the Europeans themselves, are undemocratic, archaic and others like that. All this becomes similar to how Aunt Cat came to ask for help from the kittens she had banished in due time. As in the case of the vain kittens, the BRIC countries can also offer support to their European aunt Cat. In particular, the Chinese authorities are already saying that they are ready to seriously invest in the European economy. At the same time, the words “on their own terms” are increasingly heard. It turns out that those times have passed when prim Europe, and the United States too, dictated to the rest of the world the conditions that they saw as beneficial, and therefore the only correct ones. Of course, is it possible to argue in this situation with the same China, which has more than 3 trillions of gold reserves. For any insinuations of the power of the Celestial Empire, they can simply say “Do not want - whatever you want ...” and turn to Europe in a somewhat different place. This means that Europe will either have to accept the conditions of China, or continue to gradually prepare for the burial of its economy.

Many, by the way, are confident that, they say, if it were not for the Greeks with their pre-default status, they would live in the European Union in the meantime. What is there! Already, in addition to Greece, the worst economic situation is in Portugal, Ireland, Latvia and even Italy. And some European politicians see a way out in issuing pan-European bonds, some of which can be bought out by anyone. Other politicians express quite a revolutionary idea, according to which the debt should be evenly distributed between the countries of the European Union. One can imagine how the European countries with the largest economies, Germany and France, reacted to this. If you follow the logic of people who offered this option for further action, it turns out that in the future, Greece itself can spend as much money as it pleases. At the same time, the Greeks will have nothing to fear - all the same, all the other EU countries will pay for them. Such an idea is totally unacceptable. In the end, a united Europe is not such a single entity. It is here that residents of the regions with successful development pay for subsidized regions ...

And if the plan with the all-European debt bonds still has a future, the background plan looks more like a beautiful fairy tale for those who are used to living beyond their means, not wanting to work.

In this regard, Europe has really only one way out - literally make the BRIC countries invest in their economies. Moreover, investments should be long and weighty. So, China alone is trading with the European Union in the amount of about 300 million euros. This colossal value should be increased even more so that the old Europe began to move away from financial ills.

Brazil is also supporting Europe. Of course, the Brazilian economy is far from having so many reserves as the Chinese economy, but the Brazilians can contribute to the support of Greece itself, with its debt exceeding 150% of GDP.

And what can Russia do in this situation? Our country is ready, as Finance Minister Kudrin has repeatedly stated, to invest in the European financial system, but ... This "but" is now heard from Russian politicians. Indeed, what's the point of investing capital in the EU economy, which is cracking at the seams, if these contributions do not bring dividends to Russia. In this case, Russia may well dictate certain conditions, including in terms of the abolition of visas between the EU and the Russian Federation. The presence of visas today is one of the objective brakes of joint cooperation. On the other hand, it is necessary to actively propose for Europeans not only raw materials, but also finished products. This will enable a united Europe not only to buy goods and services at relatively low prices, but also stimulate purchasing power from ordinary EU citizens.

You need to use the opportunity to export to Europe, regardless of China. Our country has such opportunities. Laying the North and South streams for Russian gas in the EU countries is one of the options for serious investments from our state.

In such a situation, it is necessary, as they say, to take the bull by the horns. If the Russian authorities and the Russian business are slow, then the vast European market may “get” to others. However, the issue of cooperation must be approached very carefully. Unreasonable investments in an economy that is experiencing not the best of times can lead to the fact that Russia is also pleased with the European economic whirlpool.

Ctrl Enter
Noticed oshЫbku Highlight text and press. Ctrl + Enter
We are
About Stalin and KhrushchevWhat you didn't want to know about England
10 comments
Information
Dear reader, to leave comments on the publication, you must to register.