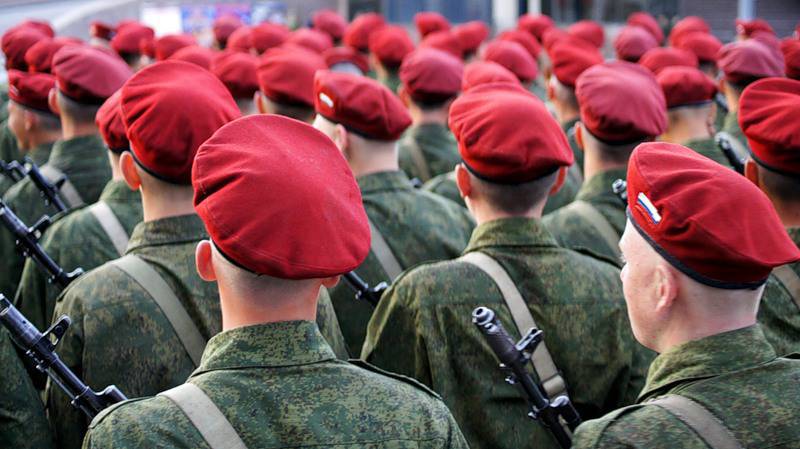 Either the insult of the paratroopers and marines leaped, or the words that only the head was sweating from such an accessory led to the Defense Ministry deciding to unexpectedly abandon the berets for the servicemen. By the way, the word unexpectedly is quite appropriate here, since, according to the old Russian custom, everything connected with the army seems to be forever. And then look: didn’t have time for 9 in May, we could see some kind of mushroom military personnel with different hats in the form of multi-colored berets marching across the main square of the country, and the idea of ​​beretising everyone and everyone decided to light a red light. Valentin Yudashkin, who was the author of this beret revolution in the Russian parts, was accused by many high-ranking military men of not understanding anything in military life and, in particular, in military uniform. A well-known couturier was told that he should have been doing his experiments on the podium of a fashion house, and our army is far from fashion. The remoteness of the army from fashion is really impressive. It should be said that in some parts of the military in the winter time, instead of a new pea jacket, they can get a coat in which their fathers, and possibly grandfathers, also fought.

So what does not fit takes military officials and servicemen of lower rank. Representatives of the Land Force told the publication that they did not like berets in a cap more familiar. In most parts, warm woolen berets came in the summer and it was corny hot in them. To keep the berets on the head, they need to be fixed with a special cord that is tied at the back of the head, and put on with both hands, pulling on the head. With a gun in his hands it is quite difficult, the infantrymen admit. "The berets are show-offs of paratroopers and marines. But even they go to combat missions wearing caps," the commander of one of the elite land brigades stressed.

Also, the paratroopers denied the statement of the land colleagues, which takes uncomfortable. "If you wear it correctly, this is the best headdress. It fits easily under the shoulder strap if you need to go into the room. You can't do this with a cap," said the representative of the landing troops. He said that each paratrooper carefully prepares his beret: he pulls it onto the jar, beats off the edges of the dumbbells, arches over the cockade; wearing a beret is a special technology that is passed down from generation to generation and ordinary infantrymen cannot understand it straight off.

Although, knowing our generals, I must say that they would hardly have been stopped by the complaints of a simple soldier. Perhaps the thing is different. Then what?

It turned out that servicemen of special units began to complain that everyone in the army had the honor of wearing a distinctive accessory of elite units. The airborne troops allegedly stated that they did not intend to endure such humiliation, seeing as a soldier of engineering troops or a rocketman walking around in a beret. They say that it takes - it is a sacred thing for every paratrooper or marine, so putting it on the head of a soldier of another kind of troops is a real blasphemy.

Honestly, such a position can hardly be called a worthy basis for the form entered six months ago so it was soon decided to replace the old one with a more familiar one. In this regard, a completely different reason for the restoration of caps and hats appears. And this reason goes into the economic plane, and not into the plane of honor and dignity of a certain group of officers and soldiers.

There are people in our army who have for years established close cooperation with enterprises engaged in sewing military uniforms. And then suddenly comes a high order that, they say, the form needs to be changed. And to change the shape is to admit new faces in the person of the same Mr. Yudashkin to the troop trough. Such a “admission” led to the fact that it was necessary to transfer part of the funds allocated by the state to the “other uncle”. Therefore, at first, interested parties under the pressure of the law could not give a fitting rebuff to innovations, and then, after a while, they came up with a way out how to remove outsiders from the field of their business. Immediately there were people who suddenly became knowingly interested in the soldiers: "How bad you must be, son, in this thick woolen beret!" And then the same people asked the paratroopers and marines: “Doesn’t it make you angry that some policeman will go to the beret?” And they answered in chorus: “Of course, they do!” That's how it was formed protest general opinion about how bad these berets are.

If the berets are so bad, then why didn't these people immediately let Mr. Yudashkin know that the accessory he designed does not suit the Russian army? Why did not the veterans and current officers of the Airborne Forces immediately say that they would not put up with the fact that instead of caps someone would be wearing a beret, shaming the honor and dignity of a soldier of elite units? However, for some reason, everyone was either silent or admired by the beauty of the new military uniforms. Just at that time, apparently, the interested parties were still thinking how to snatch the next financial piece during the large-scale “disguise” of the Russian troops. After all, it could also happen that part of the funds will again go along the beaten track of corruption into the pockets of the “wealthy”. But the money went some unknown way. And when these people found that the accounts of the firms under their control began to become empty, they had to arrange this whole performance with soldiers with sweating heads and discontent with the “blue berets”.

Therefore, we did not even have time to see our army well in all its glory from the well-known couturier, when again the soldiers would have to dress in old worn uniforms, the rejection of which, almost did not deprive someone of a good trough. And we all know very well that even though the fight against corruption in our country is taking leaps and bounds, but those who want to warm their hands and other places in the budget millions are not diminishing. Revision of military uniforms - a vivid example.

We are in Yandex Zen
The military had a claim to the new form
The Russian army will completely switch to a new uniform by 2015.
35 comments
Information
Dear reader, to leave comments on the publication, you must to register.