As "ER" wets "CP". Political tricks of the "party of power" 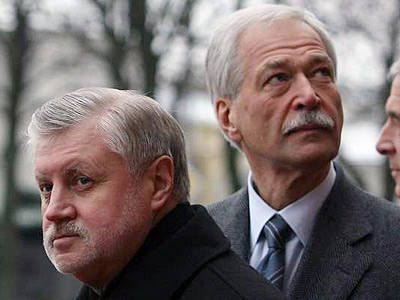 The leader of "Fair Russia" Sergei Mironov, during his visit to Khabarovsk, was presented with mourning wreaths, Kommersant reports. This is not the first incident of this kind that has happened to Mr Mironov recently. His associates believe that in this way the parties make it clear that they do not want to see it in the State Duma. In "United Russia" require evidence of their involvement in the incident. Experts Kommersant believe that the "Fair Russia" put pressure on the technology used in the 2007 year against the Union of Right Forces.


The Congress of Deputies "Fair Russia" in the Far Eastern Federal District began with a scandal. According to the press service of the party, a few minutes before the appearance of Sergey Mironov, a group of young people with mourning wreaths approached the building of the Tourist hotel, where the event took place: “From deceived voters”, “Sleep well, dear comrade”, “From pensioners. " Some time later, the Fair Funeral video appeared on the Internet. On his cadres visit Sergei Mironov, laying wreaths and the orchestra, playing a funeral march. "They have nothing to say, then there remains a kind of shocking. This is not even a provocation, but a flawed attempt to prevent our party from entering the future composition of the State Duma," Sergei Mironov assessed the incident, accusing the United Russia Young Guard activists of the incident. As noted in the party, this confirms that the video on its Facebook pages and LiveJournal was published by activists of the Young Guard of United Russia.

“If there is direct evidence that our activists did it, then let us present them,” said Ivan Julyak, head of the regional headquarters of the Young Guard of United Russia. According to him, nobody sees Sergey in Mironov as a rival: "There are brighter opponents in the face of the Liberal Democratic Party and the Communist Party of the Russian Federation, so we don’t attach any importance to his visit."

According to Kommersant in Fair Russia, this is not the first provocation against the party leader. Earlier in Yekaterinburg, representatives of the "United Russia" for the arrival of Mr. Mironov organized a gay parade. The head of the pre-election headquarters, Oleg Mikheev, connects what is happening with the fact that Mr. Mironov began to give more sharp political assessments. “Today we are openly told that“ Fair Russia ”has no place in the State Duma. I think that the pressure on the party will increase,” explains Mikheyev.

Experts of Kommersant believe that Fair Russia is being removed from the political field using technology tested on the ATP in 2007. “I recognize Surkov’s handwriting. This is an order from Putin and Medvedev. If Mironov, like me, is arrested and shown a movie that he is a spy for five intelligence services, the analogy will be complete,” says Boris Nemtsov, one of the leaders of the ATP list at that time. "Of course, the actions to eliminate the party are very similar," Leonid Gozman, who was a member of the ATP federal political council in 2007, told Kommersant. “Indeed, this technology was first tested on SPS. But then there was interspecific selection of parties, and now it was intraspecific. Fair Russia today is the main allergen for United Russia,” said Mikhail Vinogradov, president of the Petersburg Politics Foundation. “Unlike the SPS, Fair Russia is a Kremlin project. Its leader is reaping the storm that he himself sowed, becoming a critic of United Russia. What do you want if Oleg Shein, a member of the supreme council of the party, publishes a newspaper in which he calls United Russia “a party of thieves and swindlers,” notes Vinogradov.