The master of the seas: nuclear submarines of Russia and the USA 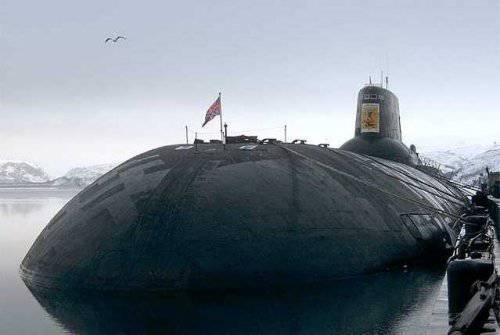 Sea creatures are larger than residents of land - this rule applies to military equipment. If any titan caught a submarine of the Shark project from the ocean and laid it on the ground, it would reach the height of an 8-storey building, and it would cover a whole block at a length.

This is not an exaggeration: the width of the hull of these giants reaches 23,3 m, and the length - 172 m. By displacement, each such submarine surpasses even the heavy aircraft carrier “Admiral Gorshkov”.

The first boat of the 941 project (“Shark”) was launched in the same 1981, and it was the same TK-208 that today, after modernization, is called “Dmitry Donskoy” and on which promising Bulava missiles are being tested . In the rest of the “Sharks” everything was more tragic. Three of them have been disposed of, or have already been transferred for recycling. The remaining two have been withdrawn to the reserve and are awaiting their fate - if funds are found, they will be upgraded using the same project 941 UM, for which everything has managed with “Dmitry Donskoy”.

The problem is the lack of suitable weapons. These submarines were designed to carry Variant ballistic missiles (P-39), powerful (range up to 8250 km and drop weight 2,25 T, 10 100 kiloton warheads) and heaviest (90 T starting mass) among all sea-based ballistic missiles . Every submarine cruiser carried 20 such monsters, which is why they turned out so huge.

Today, these missiles are no longer being produced, and those placed in service have exhausted the time reserve. For "Sharks" simply do not have the appropriate weapons. The planned Bark missiles, which could be placed on these colossal ships and were supposed to deliver up to 3 tons per 9 thousand km, were never created. And the Bulava, chosen instead, has not yet completed the testing process.

And if it is finally adopted, Sharks will need to be deeply modernized, and another big question is how necessary it is when they are replaced by the newest project of the Borey 955 submarine cruisers.

But in itself, the 941 “Shark” project became interesting not only because of the gigantic size of submarines. So, they have such a large reserve of buoyancy (31,3%) that when the submarine gets the ballast water for diving, it accounts for exactly half the displacement - for this reason, these ships received the nickname “water carriers”. But such a reserve of buoyancy allows the boat, ascending, to break through the ice to 2,5 m thick, which means to keep combat duty far in the cold Arctic.

Reliability to the whole colossus is given by a unique combination of cases: five strong are located inside the external lung. Two of them run along the submarine in parallel, like a catamaran. In the gap between them, in the front part are rocket mines. The remaining durable airtight compartments are torpedo, mechanical (in the stern) and command. This is the holy of holies of the ship, here is the commander’s chair. By the way, no one should board it, except the commander of the submarine - neither the officials visiting her, nor even the commander fleet or to the Minister of Defense.

It is today that the “Sharks” remained “without teeth” - that is, without rockets. And 20 years ago, they seemed like a rather terrible argument in the Cold War. In 1982, the head of the operational department of the Northern Fleet headquarters, Lebedko, said about them: “If this boat is put up in Moscow somewhere near Tsar Cannon, then, looking at it, humanity will consciously and voluntarily refuse to wage any wars forever” .

It is believed that it was Sharks that largely convinced the United States to compromise, and they soon concluded the SALT-2 agreement with the USSR, which, in particular, refused to develop a new generation of submarines and allocated funds for the disposal of the Sharks. The result of the disposal is already clear, but today's Russia’s hopes are now pinned on the newest submarines of the Borey 955 project.

The development of the 941 nuclear submarines in the USSR began in 1972, as a response to the similar American program Ohio (Ohio) - such submarines form the basis of the naval component of the US nuclear forces, and although the first of them was launched in 1981, their service life was extended to 2026. In total, the US Navy has 18 nuclear submarines of the Ohio project, whereas in the USSR “Sharks” only 6 was built. Yes, and their fate was not so long.
Ctrl Enter
Noticed oshЫbku Highlight text and press. Ctrl + Enter
Military Reviewin Yandex News
Military Reviewin Yandex Zen
6 comments
Ad