From “new Russians” to “new Cossacks” 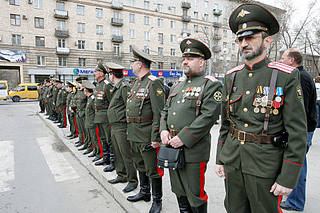 At all times in our country there were enough people who wanted to solve their tasks at the expense of public organizations. It was enough for organizations that tried to use people to achieve their own goals.


When it comes to the Cossacks in the historical sense of the word, the first thing that comes to the mind of an ordinary person is patriotism, austere life, a system of social and individual values ​​that has been built for centuries. It never occurred to anyone to believe that a Cossack could defame his name, his race, his Fatherland. Even in the immortal work of N.V. Gogol, Taras severely cracks down on his son, who retreated from the line of patriotism and the Cossack statute.

However, today we live in such an era, when literally every concept in the world can be interpreted in two ways, and the words “valor”, “honor” and “patriotism” do not cause anything in many but a sarcastic smile. What are the reasons for such a strange public degradation, when even the sacred duty is sometimes spoken of only from a consumer point of view?

So, after the collapse of a huge country called the Soviet Union, there was a tendency to revive various kinds of organizations and movements, which at one time brought considerable benefits to the state. These movements, of course, include the Cossacks. The nature of this ethnosocial phenomenon is still not clear. According to some information, the Cossacks are the Circassian tribes assimilated in Russia, on the other, this is the Turkic-Slavic branch, which has been leading since the times of the Mongol-Tatar invasion. Whatever it was, but in this case it is not the nature of the origin of the Cossacks that is important, but the system of their moral principles and principles. According to these principles, a Cossack from birth could be considered a full defender of the Fatherland, who from an early age is ready to give his life for the Russian land. No matter how pathetic it sounds today, but it was in fact.

Since the nineties of the 20 century, the Cossacks, after long years of persecution, began, as they say, to proudly raise their heads. At the same time, entire Cossack villages in the Don and Kuban, settlements in the Urals and the Far East began to revive. In truth, despite the Soviet prohibitions, many Cossacks did not lose their principles and retained the main core of their culture. However, in the wake of the large-scale revival of the Cossacks, quite dubious organizations began to appear in Russia, whose members, no matter what, put on Cossack uniforms, hitched sacks and whips, famously twisted hats, thereby demonstrating that they belong to the Cossacks. All of a sudden, entire Cossack communities began to appear in Russian cities, consisting either of former employees of city committees, or of retired police chiefs, and other people whose Cossack roots had no one had guessed before. At the same time, people, having fastened the orders of dubious origin to their own breasts, strove to find themselves in the deputy chairs of local legislative assemblies. On the eve of the next elections, among the candidates more and more often began to appear familiar faces, which appeared in a completely new look for the people - Cossack atamans, esaulov and other officials. People, of course, grumbled and did not understand where it came from the former head of the local Komsomol organization suddenly had the rank of a Cossack sergeant, which translated into a regular system means the rank of lieutenant colonel. Indeed, indeed, rereading the works of Marx and Ilyich at one time, this man advanced along two career ladders: the party and the Cossack. Surprisingly, it turns out that this is possible in our country. Even more surprising, and who, when Comrade Brezhnev or Andropov was in power, promoted the Komsomol in the Cossack hierarchy - did representatives of the party nomenklatura do it? .. After that, you no longer believe in honest elections in our country, but in ideological steadiness Cossack troops. Well, how else to behave in the case of such a huge metamorphosis occurring with a person. 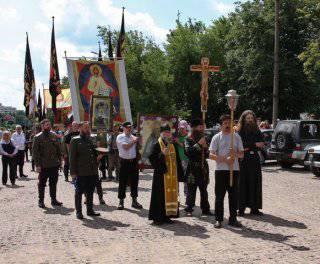 Further more! These people felt that if they pretend to be real Cossacks, they may be given special preferences. This includes land plots, often very elite, and “proximity” to the Russian Orthodox Church, which also has quite good incomes to its treasury thanks to donations from compassionate old women and those who managed to pryvreshit businessmen. In general, it turned out that in today's Russia the status of a Cossack is also an opportunity to earn good money.

In this regard, several Cossack formations could appear on the territory of one settlement, each of which belonged to a separate so-called army. So, in the north-eastern part of the Voronezh region alone, the Cossacks managed to “split up” into two irreconcilable camps. At the same time, some decided that from now on they would relate to the Great Don Army (VVD), and others - to the Hopersky Army (WW). If it were not for the local authorities, who had to extinguish the conflict between the townspeople, who suddenly found themselves on opposite sides of the barricades, then the real Cossack battles would have taken place near Voronezh. And why is all the fuss? The reason can not be considered docking in the division of Cossack property, which until recently was popular. It turned out that the former party officials did not share the land and now began to sort things out far from Cossack style. Probably, история Cossacks did not yet know the case when court hearings on the basis of mutual claims became an inalienable attribute of the Voronezh Cossacks.

It got to the point that the townspeople simply began to frankly laugh at the jesters in the form of Don and Khoper Cossacks. In local newspapers, notes began to appear more and more often that many newly-appeared Cossacks simply defame the honor and dignity of such a large-scale movement as the Cossacks.

However, representatives of the Voronezh Cossack communities went even further. They decided to either “postebatsya” over their fellow citizens, or consciously bring them to the state of “white heat”. The thing is that an active participant in the neo-Nazi movement was seen in one of the Cossack "circles" in the form of the Don Cossack. Society literally boiled with indignation. In the ranks of the Cossacks there was a man who, after the “labor” Cossack day, wears a leather jacket with fascist symbolism and paces around the city surrounded by his own kind in order to determine the new victim. What is it? Increasing the number of Cossack communities or the complete degradation of the movement? People whose grandfathers and great-grandfathers shed blood for preserving the integrity of the country into the Great Patriotic War are taking fascist thugs into their ranks! If this is not nonsense, then what? It is surprising that representatives of the Orthodox Church were present at this “circle”. Did they know about who is sitting next to in the chairs. Of course!

Are the thoughts of money so clogged our heads that they have no moral basis for a future life? It is completely incomprehensible how these people are going to explain such steps. Is it really the case that the historical connection between fascism and the Cossacks will be revealed? Let's hope that sooner or later, the mind of these people will still prevail over outright stupidity. And if not, then you just need to disperse all this non-useism with a filthy broom. And the sooner the better!

Ctrl Enter
Noticed oshЫbku Highlight text and press. Ctrl + Enter
We are
Unity of patriotism and cosmopolitanismWhat you didn't want to know about England
70 comments
Information
Dear reader, to leave comments on the publication, you must to register.