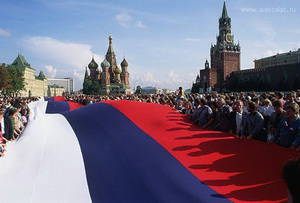 The situation in the world is rapidly deteriorating and the crisis will still show itself to the full. Difficult times await us. Such times in which to be, you have to be together. Unfortunately, in recent years, we have lost the capacity for unity and the “feeling of an elbow” that saved our country in the most difficult years. Russian society disintegrated and turned into human dust, into individuals who oppress each other in competition.


I will tell you the simple and truthful history. Once upon a time, in November forty-first, my grandfather was seriously wounded in the battles north of Moscow. He was considered dead and buried in a shallow mass grave. At night, he woke up from the wild cold, got out from under the dumped bodies, and crawled to the road for several hours, where he was picked up by his own.

The grandfather was still alive, and after the war he worked as a tractor driver for a long time. What was also not easy - an invalid, with a paralyzed arm, he worked in the field sixteen to twenty hours a day.

My grandfather had neither battle medals, nor rewards for labor. In difficult years, the awards were given very sparingly and selectively. Not so much for merit - the exploits committed to millions of everyday, but only to maintain morale and show examples in the press. The rest of the fate of his grandfather, perhaps, was no worse than others, against the background of many may even happy. Yet, of the more than two hundred men who went to the front, only three returned to the village.

He raised the children and escorted them to the city. And in the sixties he died - casually, quietly, from the unfinished front-line wounds.

He probably didn't need rewards. Such as he was millions, so that there - almost the whole country was like that. Everyday they beat the Germans and the Japanese, raised bread and children. It was a common thing - exhale feat, inhale feat. On all orders because you will not save enough. So they would say, those who were then. So would my grandfather say.

It was a society of really strong people. The feat was the norm of life. Amazing time. In the twenty years before the war, the country destroyed by civil war not only recovered, but from scratch created the most powerful industry in the world, which crushed the whole of Hitler's Europe.

What is twenty years? A single moment in terms of history. For a quarter of a century we have been running around with restructuring, reforms, but everything is just worse, worse, worse ... Now Russia, which has lost its own industry with a sinking heart, is looking news from world trading platforms. How else will the crisis deepen? What will happen to us when Europe stops buying our oil and gas, and China will not sell us industrial goods?

With all this democracy, our society has turned into a tangle of snakes, eagerly fighting for prey and stinging each other. The strong and young fight to the death, the weak and old survive as they can.

This is a catastrophe. It's like a hole in a jar for someone who crosses the desert. Ahead - difficulties ahead of troubles that can be overcome only together. And, it seems, there are all resources. But there is no main thing - there is no unity. And it makes no sense to look around in search of support and understanding. Around - only greed and anger in bloodshot eyes.

In November of the forty-second, the German advance was exhausted at Stalingrad and in the Caucasus. And on November 19, a counterattack began to the south and north of Stalingrad, which ended with the encirclement of the 300-thousandth German group. Then this group was squeezed and crushed. One English journalist then wrote from barely liberated Stalingrad:

“Suddenly, at the far end of the courtyard, I noticed a human figure. This German sat down on crusts above the cesspool. Seeing us, he hastily darted into the cellar door. But while he was passing by, I had time to make out the face of the poor fellow, in which suffering was mixed with the idiotic lack of understanding of what was happening. At that moment I wanted all of Germany to be here and to admire this spectacle. This man was probably on the verge of death. In the basement, where he sneaked away, there were, besides him, 200 Germans dying from hunger and frostbite ... I remembered the long, alarming days of the summer of 1942, the nights of London blitz, and the dreary days of 1938 and 1939. when Europe nervously caught Berlin broadcasts and listened to Hitler's cries, accompanied by the cannibalistic roar of the German crowd ... "[1]

Hitler was the first enemy who wants all of us physical death. But - not the last. In America, a nuclear bomb was invented and, to begin with, tested on the Japanese. But then it was intended - all of us. Today, hundreds of nuclear-powered missiles are aimed at you and me. And we do not even know where death threatens. Maybe from a submarine in the Indian Ocean, maybe from under the ice of Antarctica.

They say that America has the most democratic democracy in the world. But no one asked the half-million Iraqis and Afghans killed recently (and those killed), what does it taste like, this democracy? Is it a taste of blood? Is it the taste of powdered sand and dust?

After the bitter lessons of 1941-1942, the country was not rich enough, but everything that it could have invested in defense and ensuring parity with the strongest of potential enemies. To never again the enemy spilled our blood.

We made rockets and sent them to where Satan grinned. To, bitches, and did not think that in their thoughts they did not have ...

Today, the Great War, if it happens suddenly, will last from twenty to fifty minutes. And it will be suicidal for the aggressor. They know it and therefore they left us alone for now. All these quarter of a century, while our crazy experiments and games of democracy last, the rockets are on alert. Only therefore we are not Iraqis and not Afghans. Only for this reason we live in the world and have not yet felt the taste of “their” democracy.

But it is now.

And then, during the life of my grandfather, the rocket still needed to be built ... And after the war, our whole country, still in ruins, in hunger and cold created a new industry, including rocket production. My grandfather plowed for twenty years in the cold, sometimes he was malnourished, raised bread and handed it over to the state. With this bread, the country fed cities, industry, and the army. My grandfather lived in poverty, half starving. But this is not in vain. He knew that nothing was worse than war. His generation provided peace for all of us. And now, as long as our “Topol” stand in the forest, there will be no war.

Today my children are growing up. The middle one seems to be like a grandfather. So, as I know my grandfather from photographs. I see this as a good sign. Maybe he will be an engineer and will invent some kind of super-rocket, which no missile defense will take. Or maybe it will just grow bread. In general, I certainly do not know who he will be. I hope it will be useful to my country.

Ctrl Enter
Noticed oshЫbku Highlight text and press. Ctrl + Enter
We are
What you didn't want to know about England
8 comments
Information
Dear reader, to leave comments on the publication, you must to register.