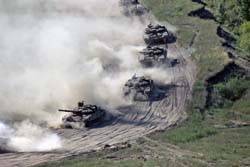 New military equipment is applied when crossing the Onon River.

According to the press service of the Siberian Military District, tank units forced the river under water to a depth of 4 meters, their successful consolidation on the opposite bank allowed the main forces to deploy to combat operations in designated areas.

According to the plans of the military, during the maneuvers almost the whole complex of questions of operational art and military strategy, including strategic redeployment of troops from one theater of war to another, offensive and defensive actions, is worked out.

The exercise involved up to 20 thousands of military personnel, up to 70 aircraft, up to 2,5 thousands of weapons, military and special equipment, up to 30 ships. In advance, the aircraft was relocated from the European part of the country to military airfields in the areas of maneuver. At the same time, Su-24M bombers and the latest Su-34 fighter-bombers made an eight-hour flight without an intermediate landing with two refueling in the air, covering a distance of more than 8 thousand kilometers, reports NEWS.ru.
Ctrl Enter
Noticed oshЫbku Highlight text and press. Ctrl + Enter
Military Reviewin Yandex News
Military Reviewin Yandex Zen
1 comment
Ad