Russian-Moroccan Relations: Past and Present 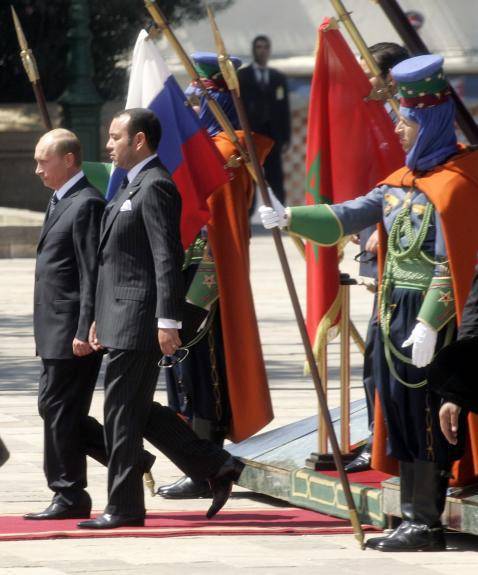 
For the first time, a Russian reader learned about Morocco in December 1732 from the message “On the Gishpani fortress of Tsieta (Ceuta. - PG), by the army of the king of Marox besieged” [1].

The bilateral relations were initiated in July 1778. They were initiated by the Sultan of Morocco Mohammed III (1757-1790), who proposed to the Russian Empress Catherine II (1762-1796) to establish bilateral trade. There was an exchange of letters between the rulers of the two states with an expression of mutual desire to improve relations of peace and friendship. Mohammed III expressed his willingness to receive the representative of Russia in Morocco.

In July, 1782, Mohammed III, sent Catherine II a new message in which he reaffirmed his friendly feelings and the granting of most-favored-nation treatment to Russian citizens. In a return letter, Catherine II also confirmed that the most favored regime in respect of the subjects of the Sultan of Morocco was observed. [2]

In the XIX century. ties between Russia and Morocco developed, but in 1891-1897. the interests of Russian subjects in Morocco were entrusted to the representative of Spain. Only 20 in October 1897. The State Council of the Russian Empire decided to establish a consular office in Tangier, the then diplomatic capital of Morocco. [3] The Consulate General of the Russian Empire in Tangier was established in November 1897. The first diplomatic representative of Russia in Morocco with the rank of resident minister was an experienced diplomat Vasily Barakht. [4] He arrived in Tangier in May 1898. “It was noted in the Foreign Affairs Report of the Russian Empire for 1898, that V.R. Baheraht was greeted in Morocco with appropriate honors and solemnity. Stay in V.R. Baherakhta in Tangier gave the sultan (Abd-al-Aziz (1894 – 1908). - PG) to send 1901 in distant Russia in July an emergency embassy led by Foreign Minister Sid Abd al-Karim ben Slimane ... " [5]. 14 May 1898 Morocco was the first Arab country with which Russia established diplomatic relations, and the only Arab state with which diplomatic relations were established before the October Revolution.

Baheraht served in Tangier for eight years. [6] In September, 1907 was replaced by a new resident minister, Pyotr Sergeyevich Botkin (the son of the distinguished physician S. P. Botkin). [7] In May 1910, the Russian government transformed the consulate general in Tangier into a diplomatic mission. [8]

After turning into 1912, the city of Morocco into a protectorate of Spain and France and dividing the country into appropriate zones, “Russia’s relations with Morocco could only be realized through Paris and Madrid. Under these conditions, departure (March 1912) by PS was natural. Botkin from Tangier, abolition (February 1913) of the Russian diplomatic mission, replacing it with a diplomatic agency and Consulate General [9], refusing Russia (February 1914) the surrender regime in Morocco, which it did not use in practice ”[10] .

Since 1961 between the USSR and Morocco began to establish contacts at the highest level. So, 9 February 1961 Rabat was visited by the Chairman of the Presidium of the Supreme Soviet of the USSR L.I. Brezhnev, where he met with the King of Morocco Mohammed V (1927-1961).

The basis of the foreign policy of Morocco in the middle 1960-ies. efforts to strengthen the country's international authority and strengthen its influence primarily among Arab and African states on the basis of "multilateral orientation". Implementation of the idea of ​​relying on the "triangle" - France, USA, USSR - according to the plan of King Hassan II (1961-1999) was to ensure Morocco one of the leading places among developing countries. Of course, this “triangle” was not equilateral, given Morocco’s attraction to Western countries. However, the king also could not ignore the growing political and economic influence of the Soviet Union in the world. [11]

27 August 1963 Morocco acceded to the Moscow Nuclear Test Ban Treaty in three environments. King Hassan II, who visited the USSR on an official visit to October 1966, stated that negotiations with the leaders of the Soviet state "yielded fruitful results in the field of trade, economic and cultural relations, as well as scientific and technical cooperation" [12]. During this visit, an agreement on cultural cooperation and an agreement on economic and technical cooperation in setting up industrial enterprises in Morocco and others were signed.

With the return visit in April 1969 of Morocco was visited by the Chairman of the Presidium of the Supreme Soviet of the USSR N.V. Podgorny. In August of the same year, a permanent Soviet-Moroccan intergovernmental commission was established. In February, the Soviet Consulate General was established in Casablanca, 1967, and the Society for Friendship with the USSR was established in 1970 in Morocco, which is an indicator of the rapidly developing relations between these countries.

The Soviet Union supported the decisions of the Fez Conference of Heads of Arab States and Governments, during which work in 1981-1982. a plan was adopted, which became the official position of the Arab countries on the Middle East settlement. [14]

30 December 1991 The Moroccan Foreign Ministry announced the recognition of the Russian Federation as the Kingdom of Morocco.

From April 1958, that is, before the establishment of diplomatic relations, bilateral trade and economic agreements [15] began to be concluded between the USSR and Morocco, including in such areas as air traffic (1962), fisheries (1978) and phosphorites (1978 ). [16] With the help of the Soviet Union and Russia, a number of industrial facilities were built in Morocco (the dam and the Nurbaz HPP, the Dzherada TPP, the Mansur al-Dahbi hydro, the Moulay Youssef HPP). In 1998, the Al-Wahda hydropower complex (one of the largest in Africa) was commissioned in Morocco, for the construction of which a Russian loan of 100 million ECU was allocated and built with the assistance of Technopromexport. This HES provides 30% hydropower production in Morocco. [17] Both sides are interested in developing the accumulated experience of cooperation in the construction of hydraulic structures.

In April, 1998 in Rabat between ITAR-TASS and the Moroccan news agency MAP signed a cooperation agreement.

A promising area of ​​cooperation with Morocco is the field of high technologies. An important step in this direction was the successful launch of 10 on December 2001 from the Baikonur cosmodrome of the Moroccan Maroc-Tubsat satellite launched into Russian orbit. The beginning of cooperation in the military-technical sphere.

In February, the first meeting of the Russian-Moroccan intergovernmental mixed commission on economic, scientific and technical cooperation was held in Rabat, 2004, in June, the second meeting of 2006 in Moscow was held in June, and the third meeting was held in April of 2008.

An important step in the development of Russian tourism in Morocco was the decision of the Moroccan government to move unilaterally from 13 June 2005 to a visa-free regime with Russia.

Morocco is one of the largest trading partners of Russia on the African continent. The main Russian export goods to the Moroccan market are oil, ammonia, sulfur, nitrogen and potash fertilizers, lumber and metal products. The basis of imports from Morocco to Russia are traditionally citrus fruits, coffee extracts and concentrates and tomatoes. [19] In 2008, trade turnover between Russia and Morocco amounted to 2 billion dollars. Thus, for Russia, Morocco became the second most important partner among the countries of the Arab East and the first among the countries of the African continent. [20]

Increased activity in the sphere of bilateral trade and economic cooperation is accompanied by a constant constructive dialogue at the political level. Thus, in the period 15-17 of June 2010 in Moscow, the 4-th meeting of the Russian-Moroccan intergovernmental commission on economic, scientific and technical cooperation was held. The Moroccan part of the Commission was headed by the Minister of Foreign Affairs and Cooperation of Morocco, T.F. Fihri, Russian - Minister of Justice of Russia A.V. Konovalov. During the meeting, which was held in a businesslike and constructive atmosphere, the sides discussed the main issues of Russian-Moroccan economic cooperation. The state of affairs in such priority areas of bilateral cooperation as trade, industry, energy, finance, agriculture, mining, as well as cooperation in space, transport, education, professional training, culture, health and tourism, was reviewed. [21]

16 June 2011 between the Russian and Moroccan parties, an agreement was signed on the construction of a high-speed highway between the cities of Taza and Al Hoceima. The project, which is scheduled for the period from 2011 to 2015, is estimated at 2,5 billion Moroccan dirhams (about 280 million dollars) and is aimed at modernizing the transport infrastructure of the country, as well as the socio-economic development of remote regions. It is assumed that during this period about 420 km of high-speed highways will be built and 36 bridges will be reconstructed. [22]

10 June 2014 was held in Moscow with the participation of the Embassy of the Kingdom of Morocco and the Chamber of Commerce and Industry of the Russian Federation a Moroccan-Russian forum “Morocco is a strategic partner of Russia” was held, where the prospects for deepening and expanding Russian-Moroccan relations in trade, investment, industry, tourism, were discussed agriculture, fisheries and energy. The forum was attended by high-ranking officials of Russia and Morocco, as well as Russian and Moroccan entrepreneurs. [23]

Cultural cooperation is developing between Russia and Morocco. So, in October 2007 in Moscow and Vladimir were held Days of Culture of the Kingdom of Morocco in the Russian Federation. The event included performances by Moroccan creative teams, an exhibition of works by artists, a display of works by cinematographers of the country. In November, 2007 was organized for the first time in the post-Soviet period in Marrakesh, the Russian Film Week. [24]

15-17 June 2010 The above-mentioned Russian-Moroccan Intergovernmental Commission examined various ways of enhancing and developing cultural cooperation under an agreement signed in Rabat in March 2010 by representatives of the ministries of culture of both countries. The experts of the Commission assessed in detail the shortcomings and prospects of partnerships in the cultural sphere. The results of their discussion are reflected in numerous joint projects of public and private institutions. Projects are envisaged in such areas as higher education, sports, the humanities and social sciences, natural sciences, art, youth, cultural heritage and the study of the Russian language. In line with the decisions taken, the Russian Center for Science and Culture, together with the Association of Russian Language Teachers in Morocco and the International Association of the Russian Language, held the Russian Language Week in Morocco as part of the World Festival of the Russian Language in Rabat 8-13 in November 2010 November. [25]

Meeting of the Minister of Foreign Affairs and Cooperation of Morocco, T.F. Fikhri with the Minister of Foreign Affairs of Russia S.V. During the work of the above-mentioned Russian-Moroccan intergovernmental commission, Lavrov revealed the similarity of their positions in international and regional issues, including the settlement of the conflict in the Middle East and the creation of a Palestinian state, the peaceful settlement of the conflict by political and diplomatic methods, the promotion of sustainable development of the African continent and the fight against terrorism and religious extremism. [26]

Russia regards Morocco as a reliable partner in international affairs, in particular, given the solid political weight and authority of Rabat in the Arab and Islamic world. The approaches of our countries to current issues of world politics, including crisis management, countering terrorism, are close or coincide. This also concerns such issues as the formation of a multipolar world pattern, the enhancement of the UN’s role in world affairs, stability and security in the Mediterranean, North Africa and the Middle East. [27]