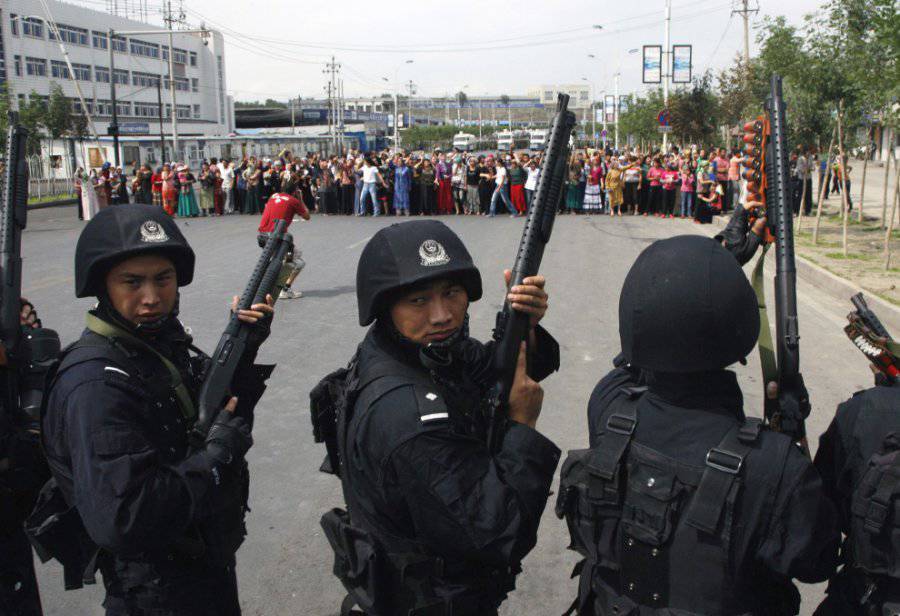 China loudly celebrated the 90th anniversary of the founding of the Communist Party. Itself historical The event of the formation of the Communist Party of China took place illegally in Shanghai from July 23 to August 5, 1921. As usual, the authorities timed to coincide with this date the release of the film "The Beginning of a New Revival."

According to the good old communist customs, the party and the government represented by the chairman of the government of radio, cinema and television demanded that the picture collect at least 1 billion yuan ($ 154,4 million). In pursuance of this prescription, they gave an indication that employees of state-owned companies and enterprises must see the “Beginning of a New Revival”. Many companies even freed people from work for half a day, so that they would have the opportunity to go to the cinema and enjoy the tape. In schools and universities, lessons were canceled so that pupils and students could see how the Communists won. However, the majority of irresponsible citizens, bypassing cinemas, went to go about their business, and therefore the plan for the revision was not carried out. Unlike the film “The Big Case of Founding the Republic”, shot two years ago, about the formation of the People's Republic of China, the new blockbuster failed at the box office.

Despite the obvious success in the economy, the situation in the country does not correspond at all to the propaganda in the film The Beginning of a Great Revival. However, the fairly widespread indifference of the population is not the most serious problem in which power deals. National clashes, especially in the western part of the Middle Kingdom, were again in the foreground. However, they never disappeared from there.

Xinjiang Uygur Autonomous Region (XUAR), which means “new frontier”, “new frontiers” in Chinese, is a region in the north-west of the country, the largest territorially-administrative unit of the PRC. Historical toponym - East Turkestan. The indigenous population of the region consists mainly of Uighurs (45%), Chinese (Hans - 40,5%), Kazakhs (7%), Kirghiz, Dungans, Uzbeks, Russians and some other peoples. The main religion in this territory was Islam. The USSR supported separatist state formations in the XUAR: East Turkestan Islamic Republic (1933-1934) and East Turkestan Revolutionary Republic (1944-1949). During the Holodomor 1932-1933, around 500, thousands of Kazakhs emigrated to Xinjiang and thus escaped from starvation. About 80% of XUAR Uighurs live in the south-west, the Kazakhs - mainly in the north of Xinjiang, the Hans - mainly in the east and north of the autonomous region. National relations there have always been tense. Since 1950, the Chinese authorities have pursued a policy of mass resettlement of Chinese there to change the demographic situation, as a result of which problems only became more acute. Among the non-Chinese, predominantly Uygur population, separatist sentiments are quite strong, in addition, the number of supporters of Islamic fundamentalism is growing. A number of Uygur organizations are waging an armed struggle to create their own state - East Turkestan.

In early August, a series of armed clashes took place in Kashgar (a city in the extreme west of XUAR), accompanied by two explosions, killing 20 people. The authorities of the Middle Kingdom blamed terrorist attacks on militants from the Islamic Movement for the Liberation of Eastern Turkestan (RZST), who were trained in Pakistan. The next day there was a new attack - 27 people died.

The events in Kashgar are another episode of terrorist attacks that broke out in the XUAR over the past month. A large-scale incident occurred in the city of Khotan on 18 July. Then the police shot 14 Uigurs who attacked the local police station, killed two prisoners and two civilians. A considerable surge of unrest occurred in July 2009 year. Then, during the riots in the capital of the XUAR, Urumche, according to official figures, 197 died and more than 1,7 thousand people were injured. In terms of the number of victims, these events became the most bloody in the modern history of China, after the events in Tiananmen Square.

Chinese officials use not only police methods, but also economic ones. In May last year, the head of the PRC, Hu Jintao, announced a national project to improve life in Xinjiang. By 2015, spending on it will be 10 billion yuan ($ 1,5 billion). And by 2012, all the elderly will be provided with pensions, while in the Celestial Empire itself, the pension system operates in large cities and state-owned enterprises. They plan to finance the program with revenues from oil and gas production in the region. There is an active construction of roads. Kashgar became part of the Lanzhou-Xinjiang Railway at the end of 1999, as a result of laying a new route to South Xinjiang. From July 2008, construction of the 488-kilometer railway to Khotan began. In addition, design and exploration work began on expanding the railway network to neighboring Pakistan through Khunjerab Pass. At the same time, Beijing does not refuse further Sinization of the XUAR. There is a plan to turn around 100 thousand Uighur nomads into a sedentary people and provide instruction in Chinese in all schools. The implementation of large-scale infrastructure projects do not really like the Uighurs themselves. However, as recent events show, these programs do not yet have results. Beijing has not yet managed to establish control over the situation in this hydrocarbon-rich and strategically important region, through which the main pipelines from Central Asia run.

For other reasons, unrest swept Dalian city, (the Russian name of which is Far, Japanese - Dairen), located on the Liaodong Peninsula not far from the famous Lushun (Port Arthur). At mass demonstrations, city residents demanded the closure of the Fujia Corporation Chemical Plant. A brief report from the Xinhua News Agency stated that the work of the enterprise was temporarily suspended. Fears engulfed the population when Muif’s tropical storm damaged a dam around the plant, which posed a risk of para-xylene, a toxic substance used in the textile industry.

There is no direct connection between the events in XUAR and on the Liaodong Peninsula. However, for Beijing they are not very good harbingers. National problems in the west of the country are complemented by certain difficulties in the east. And in a region that was exemplary. Billions went to the development of Dalian, they drove here to demonstrate the success of Russian President Dmitry Medvedev. The second problem for the authorities was that the meetings in Dalian were well organized. Despite the fact that access to Twitter is closed, nevertheless, on the Sina Weibo website, users blamed the power for what it is. Reuters caused a particular disturbance, citing a source in the Chinese chemical industry, that the chemical plant in Dalian is in fact continuing to operate. Although there were no anti-government slogans on the demonstration, they realize in Beijing that this will not have to wait long.

Despite the considerable money allocated by XUAR, the unrest in the region does not subside. Similarly, in Dalian. The standard of living there is much higher than in the west, but the population is dissatisfied. Now only ecology. But as they say, a good start is half the battle. In addition, China’s economic growth is slowing and the financial capacity of the authorities is decreasing.

In the end, man does not live by bread alone. Once confirmed the view that only economic success demands political freedoms not suppress. And propaganda fanfare, large-scale films about the glorious past do not really help. The time to reform is coming. And the sooner they start in a country that is a world leader, the better it will be for the entire planet. Otherwise, you can be late, as some Arab countries.
Ctrl Enter

We are in Yandex Zen
Il and Yun - predicted contrary
List of destroyed the largest and most high-tech enterprises
4 comments
Information
Dear reader, to leave comments on the publication, you must to register.