Peace Misha, or Saakashvili goes "with the world" ... 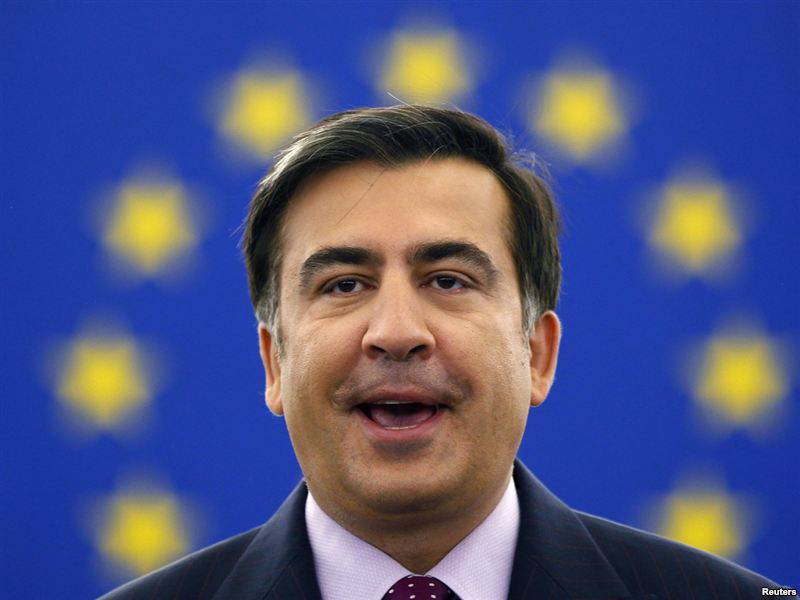 In connection with the third anniversary of the recognition of independence of the Republic of South Ossetia by the Russian Federation on August 26, calling on its flagships to 3's thousands of people, the Georgian president plans to hold a so-called “peace march”, which will run from the Georgian village of Odzisi to the South Ossetian town of Leningori. At the same time, politicians and high-ranking military officials, who gave orders to kill civilians and Russian peacekeepers, are not going to take part in the upcoming march. What for? These people, according to a new Georgian habit, plan to drive refugees from South Ossetia, people from the Chechen Republic and other "interested" people to a "peace march". Naturally, it was not without appeals to the participants of the march on the part of the leadership that they act under the slogans “Bring back our homes” and “Georgia is one!” In the eyes of a sane person, to whom Mr. Saakashvili and his puppeteers, unfortunately, do not belong, It all looks like real cynicism. People who themselves plundered Ossetian villages and cities in the early nineties, killed children and women, seized their homes, now they want to be returned to them the same loot. This is similar to how a thief who took out all the valuables from the apartment and was detained by police officers, after being released from the colony, comes to the landlord and demands to return the things he once stole from him. The situation is similar to the real nonsense.

Talking about the unity of Georgia today is also more like idiocy, because people with posters themselves once crushed this unity and trampled down their boots. Where did this president of Georgia come from? What does she eat?

After the failed 2008 campaign of the year, Saakashvili and his associates wanted to expose themselves and their country as victims of the aggression of their barbarian neighbor. Incidentally, the Georgian leader often applies just such an epithet to Russia. So, “bearded barbarians and vandals” attacked his tiny peaceful republic in order to wipe out all Georgians from the face of the Earth and put their protege in Tbilisi. They say that only the international community and the valor of the Georgian troops did not allow Russian monsters to reach the capital of Georgia. All of this initially caused a storm of indignation among ordinary people, but now such statements either simply go unheeded or cause an ironic smile. Misha himself, many times already, is trying to attract the West to the problem of “unity” of Georgia, but the West, after having been cruelly deceived by Misha in 2008, now looks at his words as a psychiatrist at all the tricks of his patient. Only the United States, which produced the play titled “Establishing constitutional order in the territory of South Ossetia,” decided to slightly support their brother Michael and endowed the two republics (Abkhazia and South Ossetia) as the occupied areas of the Georgian state. Well, we must somehow keep the brand ... It’s worth noting that the Georgian authorities exclude such a phrase as “South Ossetia” from their vocabulary. Like, this is not Ossetia, but a part of Georgia called Samachablo. However, the matter of lexical turnover is the last thing. No matter how you name the Republic, even Saakashviliya or Mishlyandiya, she is unlikely to return from this to the warm Tbilisi wing.

Yes, and how to return after all that has happened to this long-suffering people over the past 20 years. And really, a lot has happened.

At the very end of 80, Georgia decided to recognize the seventy-year fraternal coexistence with other Soviet Republics by the occupation of Soviet Russia. By the way, it is interesting how the Georgians themselves relate to the fact that for thirty years Georgia was “occupied” by their compatriot Stalin.

After Zviad Gamsakhurdia came to power in Georgia, an active campaign was launched to expel Ossetians from the territory of South Ossetia. In November, 1989 Mr. Gamsakhurdia decided to organize a "peace march" on Tskhinval. Amazing thing how is repeated историяGamsakhurdia "peacefully went" to Ossetia, and now Saakashvili wants the same. The only difference is that Gamsakhurdia went himself, and Misha sent people who were dressed in civilian clothes to the border. Just after that very campaign of Gamsakhurdia, months of a bloody war began on the territory of South Ossetia. Only Russian peacekeepers managed to stop the conflict. President Gamsakhurdia brought Georgia to internal discord and civil war and committed suicide. We will not draw any parallels with Mikhail Saakashvili, but the plots, between which there are more than 20 years of history, are somehow very similar to each other.

We should not forget that provocations by the Georgian authorities were undertaken in the times of Eduard Shevardnadze. In general, the meaning is as follows: any “independent” Georgian leader sleeps and sees how this same Samachablo either lies in ruins, or Georgian flags fly over it. And each time, all organized “peace marches” are directed towards one of such results towards the Georgian-Ossetian border.

For some reason, Saakashvili decided to organize only one "peace campaign". After all, it is quite possible to recruit another group of “supporters of Georgian unity” and march on Abkhazia. Abkhazians would be no less delighted with the “peaceful” initiative ...

Many analysts are trying to understand why Saakashvili’s “peace march” is planning to be held just before Leningori. Most experts are inclined to believe that the area between Leningori and Tskhinval is very difficult, therefore the main Ossetian and Russian forces, in the event of the beginning of “peaceful” events, will not arrive immediately. However, news of the upcoming event has already reached the leadership of South Ossetia and the Russian military units stationed in the Republic. Therefore, on Friday the world community can expect a new series from the screenwriters of Saakashvili, Obama and other figures of world political cinema. The main thing is that this time the situation does not reach the point where Russian troops have to stop at the approaches to Tbilisi. If “peaceful marches” are already, then it’s necessary both ways, isn’t it.
Ctrl Enter

We are in Yandex Zen
Nikolay Silaev, Andrei Sushentsov: Georgia after the elections and prospects for Russian-Georgian relations
"Russia must intervene in the events taking place in Georgia"
10 comments
Information
Dear reader, to leave comments on the publication, you must to register.