Again about money and central banks. Part of 1 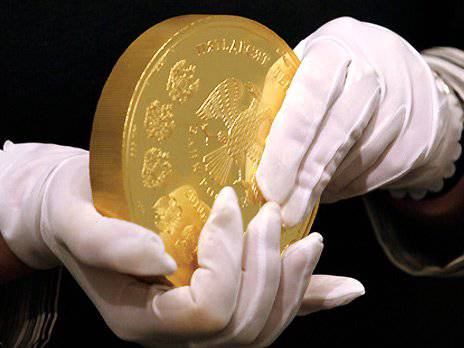 No matter how complicated the situation in the world is, the determining mechanisms are always the same - money and geopolitics resulting from them. It is hard to believe that the USA is so preoccupied with the situation in Ukraine that they are ready to enter into a third world war in the name of democracy and freedom. A sharp drop in the educational level in the Anglo-Saxon world leads to a reduction in the intellectual base of this civilization, and if you could admire the endless multi-pass algorithm of US foreign policy, then today, with all assurances, it all looks very confused and immoral. Mayat with the dollar and an attempt to preserve the possibility of parasitism due to emissions leads to the fact that the world has plunged into the economy of debt, which requires a literal transition to a different reality. Prior to the early seventies, the United States managed to be odd with its own gold reserve, which served as a security pledge. But in the end, the limited gold reserves of the United States demanded to change the situation, and the dollar was untied from gold (the famous "Nixon Shock"). It was necessary to find a replacement for the dollar, which had already become similar to a fake piece of paper, and such collateral was found — oil for dollars.

But these are all known facts, the essence of the debt economy itself is much less frequently analyzed, and in the meantime it is a wonderful miracle, for it lacks any sensible sense and looks like a single fraudulent scheme. However, for a decent amount of time, she successfully works and tries to continue her work. Any money in the modern economy arises as a debt, and is realized through credit schemes. Loans themselves are initially money from the air, because they arise as a multi-effect effect from a deposit multiplied by a turnover. In fact, this is fake money, which, nevertheless, is completely legal. A person who transfers real money to a bank receives a bank receipt in return, which in itself is only a issued bank obligation, but no longer money. The urgent attempt of the financial lobby to persuade the government to switch exclusively to cashless payments, the essence of the transition to money substitutes, this will allow to build even more sophisticated schemes of cheating on money. Under the deposit, the bank issues a certain number of credits minus the reserve requirement. The number of loans, therefore, exceeds the amount of the deposit several times. But this is not all, the loan is burdened with interest on the loan, which forms an unsolvable mathematical relationship, because in a closed financial system (and the world financial system is closed) there is simply no money to pay off interest.

Thus, there is always more debt capital than real capital, which means that in order to balance itself the system must be in constant dynamic expansion, and for this it is necessary that the markets constantly grow. But there is nothing permanent in the world, the more constantly growing artificial markets, the system will fail. And this failure will turn around a constant increase in debt. And since material means serve as security for debt, they will gradually flow into the hands of those who have invented such a cunning plan. The US treaty with OPEC countries, and above all with Saudi Arabia, on switching to paying oil for dollars, allowed America to lift restrictions on issuing its private money, and the Anglo-Saxon world got incredible opportunities to exploit the whole world. The dollar has acquired the ability to export goods with 100% liquidity exchange for any product. But today, this scheme has reached its practical limit of efficiency, like a jammed motor, which is buzzing but no longer sets the system in motion. However, the world is used to this order of things. The world is sick of money out of thin air, and wants to be cut off by this garbage before mortal convulsions, and therefore no sensible argument can yet make a difference. The system should collapse naturally.

It is curious to observe how the West went bankrupt, who was drowned in debt before the complete loss of visual contact, behaves as if the 60s are still outside the window, and they are the gods of the universe. They impose sanctions, as if trying to shoot their leg, pushing on the endless emission of money on trust, which remained the only means of supporting them in a half-alive state. If we analyze the real GDP growth and subtract the growth of debt obligations from it, then we see a very bleak picture, for example, the reduction of Eurozone GDP for the period from 2009 to 2013 amounted to more than 25% (by some estimates far beyond 30%). It is not even a recession, it is a collapse. But, you look at the faces of officials from the European Union, do they look like concerned people? They discuss anti-Russian sanctions with some kind of diabolical tenderness when there is complete economic ruin in their own home. All this is only evidence that the elite is divorced from their own states, it doesn’t care what happens in their areas of responsibility, if only they don’t fail a financial stream from which they are fed. Now look at Russia (Graph 1).

Obviously, the state of the Russian economy is simply incomparable, and this, for all the stupidity of government economic policy. If we take into account that our statistics do not reflect the entire economy, many of which remain in the shadows, the ratio will grow even more. But does this give reason for an idle pastime? No and no again. The situation with debts in the United States looks quite disastrous. But America is a country with other possibilities, and it milks the entire global system, and therefore can afford any debts. Being a reserve currency issuer, this country can draw any budget figures for itself. But everyone knows about this for a long time, they just do not know how to get steady growth in a completely incapable system for development. In other words, the "magic of the printer" has reached its limit and does not create anything but problems. What can be the solution in this situation? Sharp reformatting and restructuring of world markets. In other words, a complete redistribution of capital flows and the delineation of closed zones, access to which will be sharply limited. What risks threaten Russia? All our economic policies are still built on the integration of raw materials into the global market. Our budget is formed as the sum of revenues from resource exports, not only oil and gas, which, of course, make up a large part of it (44,1%), but also from the mass of other raw materials (3,26%). Non-resource budget revenues in the current period are 52,64%. If we deduct from customs revenues from customs duties, most of which are import and export duties on raw materials, the domestic market budget will be only 43,74%. 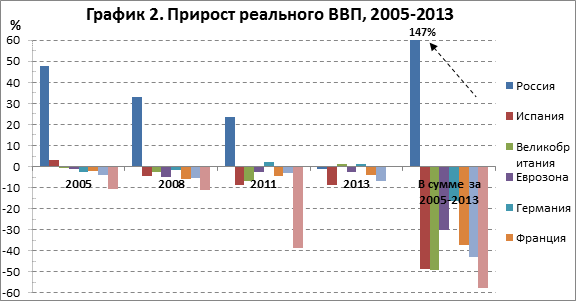 Thus, the revenues of the Russian budget from the export of raw materials and duties in the current period are 56,26%. For comparison, in the late USSR (1990 d) the budget depended on the external market only on 15,9%, and even less during the stagnation period (http://refru.ru/budgets.pdf). So what happens if we are cut off from export earnings, at least by half? We will live in Africa. The number of beggars will increase to 80%. Joyless perspective. And what is our choice? Actually small: either fall down and ask for the “big brother” attendants, or return to a planned economy and a self-sufficient economy. Both that and other choice problem. The first one is problematic, because they will not offer much, and we will remain a raw materials appendage with a poor population. The second requires the nationalization of the Central Bank and the complete demolition of the elite, which is very difficult to do in the present conditions. Of course, there is a third choice: quietly, without attracting attention, rebuild the industry and reform the financial system, pump muscles and call for friendship for all. What, in principle, is happening now. But this choice will never lead to a radical improvement in the situation, and we will continue to flounder between “very bad” and “just bad”, now dropping down, then raising a little. Therefore, we are forced to move towards the return of a planned balanced economy.

Our government will never announce it out loud, but you see what happens on television, there are solid films from the Soviet past. Why are there so many of them? To recover memory. The economy of the USSR, especially in the period of pre-war mobilization and the late period, called stagnant, was not just effective, but the most efficient in the world. Tasks solved with its help are impossible to accomplish in modern Russia. Such a targeted concentration of industrial and infrastructural efforts under capitalist relations is impossible. The level of social security cannot be compared with the current level of protection of the population.

The current situation, due to the crisis in Ukraine, gives us a unique chance. Without causing excessive annoyance from the “Big Brother”, but ostensibly only as a reaction to sanctions, to completely modernize the economic basis, and with it the entire social structure of the state. Return order and stability to the country, get away from total raw material and product dependence on foreign markets, create a social model that could comfortably pass the transition to the sixth technological order, create a defense complex that did not leave even chances for a minimal military conflict concept of budget deficit. With regard to financial policy and inefficient securities, there is a simple solution to this problem. Create a two-contour financial model. That is, to create, as it was in the USSR, two contours of the turnover of financial resources. Internal on the basis of state treasury notes, which will be issued by the state treasury, and external, in which money of the Central Bank is exchanged for foreign exchange resources without restrictions. Systems will exist in parallel. In essence, the money of the Central Bank will be pseudo money, as it is today, and state money will become the basis for financing its own economy. Of course, for the transition to such a system, it will be very important to carry out the necessary reforms, and first of all, to close, as Glazyev suggests, illegal capital outflows and to reduce import dependence by several times. But in general, we will get rid of the disastrous policy of the “Currency Committee” and the economy will receive cheap and long money.

At one time, when the world was actively transitioning to the gold standard, Mexico found itself aloof from these processes (they say its government was simply not up to date). Suddenly, its economy jumped by 7%, and the country began to grow rapidly. The best "friends" immediately pointed out to Mexico the "important" financial processes taking place in the world. And a year later, its economy slipped into recession, and then into a crisis, from which it still does not get out. Sometimes it is very useful not to know something.