Landing Boeing B-52 with a torn keel

November 26, 2014
18
On the Internet you can find photos of the American strategic bomber Boeing B-52, which flies with heavily damaged tail. Also in the vast network you can find videos that reflect this aerial incident. It was an incident, not a catastrophe, because despite the damage that was so critical for such a heavy machine, thanks to the crew’s actions, the bomber was successfully landed at Blytheville airbase in Arkansaz. This история It ended well, and all its participants escaped with only fright, which was hardly easy.

It is worth noting that the Boeing B-52 is one of the most recognizable and most "long-playing" aircraft of our time. The Boeing B-52 Stratofortress (Stratospheric Fortress) is a multifunctional American strategic bomber-bomber belonging to second-generation strategists. The aircraft was adopted by the US Air Force in 1955 year. Currently, B-52, along with the Russian strategic bomber Tu-95, are absolute champions in terms of flight range, as well as the duration of their military service. These aircraft are continuously in service for over half a century. The machine, which was created in 50-s of the last century under the requirements of the Cold War, is still relevant. The US Air Force plans to operate this aircraft at least until the 2040 of the year, and 11,9 is planning to spend billions of dollars to upgrade the cars.

It is unlikely that the designers of the Boeing Company, who created this famous strategic bomber, who for many years was the personification of the US military power and was considered a symbol of the power of this country (just like a century before it, the English battleships and the first dreadnoughts personified the power of the British Empire) believed that will stay in the service for so many years. The car, in fact, not only survived its creators, but also the threat that Washington saw in the image of the Soviet Union. On the other hand, the pragmatic American designers of Boeing could not even bother with the image of the enemy, but simply work in an effort to get a new large order, and with maximum efficiency realized their technical task. 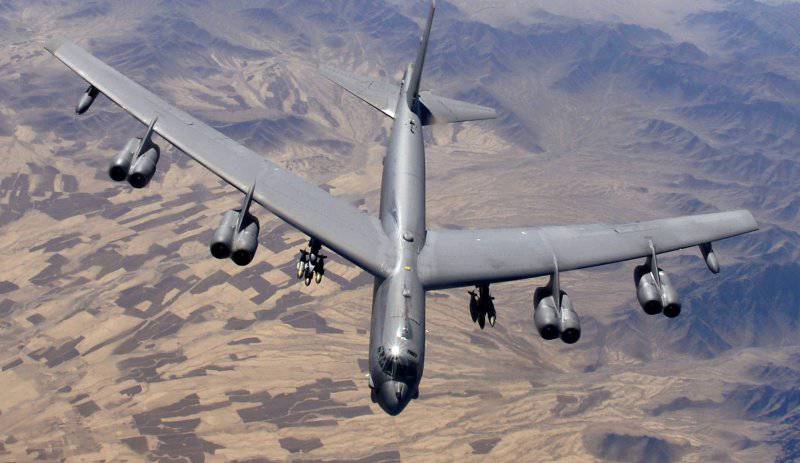 The aircraft of more than 200 tons created by them could fly with a maximum speed of up to 957 km / h (0,87М) and carry a huge bomb load — more than 22 tons in the armament compartment, the aircraft in the B-52H modification, which is currently in service, This figure exceeds 27 tons. All American B-52 are older than 50 years. In this case, by 2040, the age of the aircraft will reach 83 years, they will be used up to the full development of the airframe resource. Such an enviable longevity is explained by the successful design and to some extent explains the happy outcome of the event, which occurred during the test flight in 1964, and whose photos are walking around the net today. Many consider these photographs implausible, but they are real.

The B-52H-170-BW S / N 61-0023 aircraft is presented on a series of shots on the Internet, all of which were made after a strong turbulent flow literally cut off the vertical stabilizer. This model was specially equipped for the study of turbulence. It was decided to begin detailed studies of the influence of this phenomenon on the aircraft after several combat bombers had already been lost. In that famous flight, during which B-52 lost the rudder and vertical stabilizer, the first pilot Chuck Fisher flew the plane, the second pilot was Dick Kerry. The crew managed to save the aircraft by landing at the Blytheville airbase.

A detailed account of this flight incident was left by John A. Smith, a retired US Air Force colonel who died in Las Vegas on 2010. In 1964, he came to Boeing Aircraft in Wichita as an observer and made several flights with Chuck Fisher, who told him about the famous flight. The translation of the story was done by Boris Krotkov. 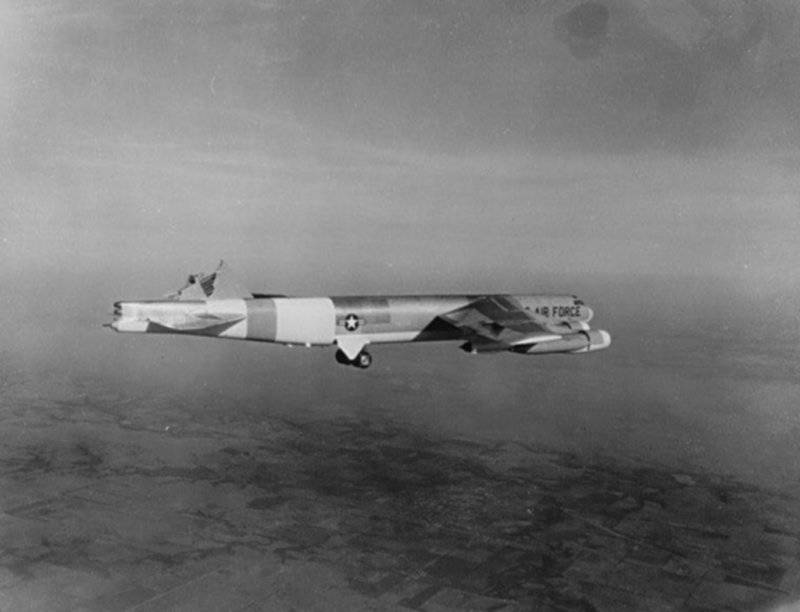 Chuck Fisher’s B-52 aircraft was fully equipped and equipped to conduct turbulence research, as well as the influence of side winds on the Oil Can Low Level route, which began in Texas and then went west to Nevada and the famous 51 Zone. The plane flew along the route at an altitude of approximately 1500 feet, the instruments showed the speed of 350 nodes (approximately 650 km / h), at this point the intercom navigator reported to Chuck that the side wind suddenly increased, reaching 70 nodes gradually. That is what led to the fact that the keel of the bomber was seriously damaged. According to Chuck, the wind was blowing on the left, and he instantly managed to feel that the rudder control was missing, as well as the ailerons, in addition, the hydraulic system refused. After about 15 seconds, the pilot thought about how to fly further.

Guided by either intuition or instincts, Chuck Fisher immediately used separate control of the load. Separate control is the use of an engine control knob to reduce or increase engine thrust on the right or left wing. That is, at the moment when the left wing of the aircraft was falling, Chuck gave full thrust to the engines on the left wing and reduced thrust to the engines on the right. At that moment, the rudder was simply absent, the ailerons were inactive, and the only controls that were under the pilot’s right hand were obedient to him were engine control knobs. 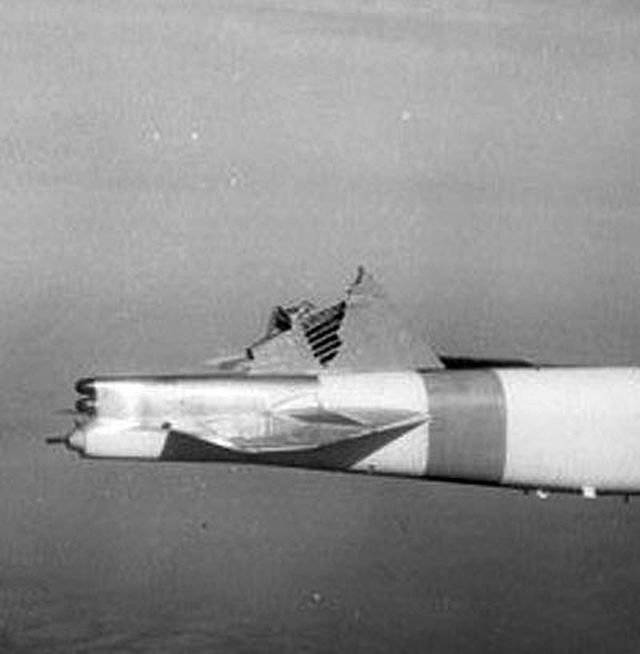 By the time the control was returned to the aircraft and managed to be put into horizontal flight, the altitude had already dropped to 300 feet. Adding traction forced the car to climb, and decrease - to lose. At the same time, a decrease in the thrust of the right-hand engines and an increase in the left caused a turn to the right; When the pilot's heartbeat calmed down so much that he was able to hear something else besides the sound of blood in his ears, he contacted the Boeing-Wichita base, where he served as test leader for the bombers, and reported on the situation in flight. In the final stages of the conversation, Chuck Fisher asked: "What will I get if I can return this chest to the whole earth?" The answer was: "Save your work."

All flight information that led to the loss of the vertical stabilizer and rudder was recorded on magnetic tapes. Chuck Fisher did not want them to be lost. Therefore, he ordered the navigator to collect all the boxes with the records on his lap and leave the car near the military base (Chuck himself never left intact or even damaged cars). The flight was quite long, in the end it was decided to land the plane at the Blytheville base in Arkansas. This place was not chosen by chance. It was best suited for landing a multi-ton bomber: flat terrain, excellent weather conditions, a large amount of empty, unsettled space, and there was everything that could be needed for rescue work. 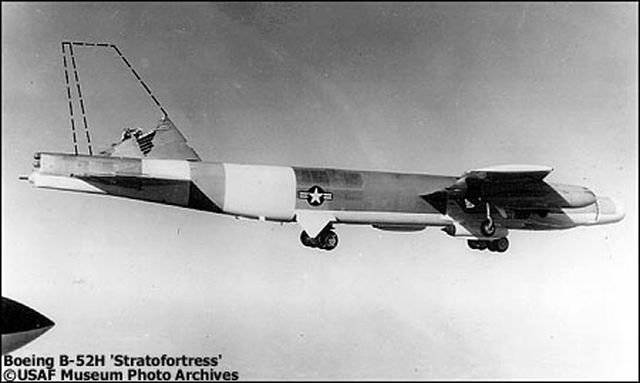 Fisher lowered the flight altitude to 2000 feet, until his plane appeared on the ground-based radar base and began planning a very long landing approach. He edited the last edits at a distance somewhere in 50 miles from the base, after which he addressed the ground with another problem. Chuck tried to release the flaps and chassis, not knowing whether they are controlled. The chassis was released in normal mode, pneumatic systems worked, with which there were no problems, but with the flaps everything was far from simple. After trying to deflect the flaps and the subsequent exhausting struggle to maintain flight altitude, the pilot decided to plant the car without flaps, which automatically meant that at the moment the runway touched, the B-52 speed would be significantly higher than the recommended landing. However, this circumstance could not prevent the pilot to land the plane in Blytheville, showing, in the opinion of most eyewitnesses, an incredibly high level of flying skill.

Something similar after years 20 was able to repeat the captain who piloted the passenger airline DC-10 of United Airlines. He managed to perform almost successful landing in Sioux City (Iowa). Then the crew managed to make an emergency landing 45 minutes after the failure of the hydraulic system. 174 passenger survived from 285 and 10 crew members from 11. The fact that the car remained controlled, and some of the passengers were saved in such harsh conditions, was recognized as an example of the extraordinary skill of the aircraft crew.