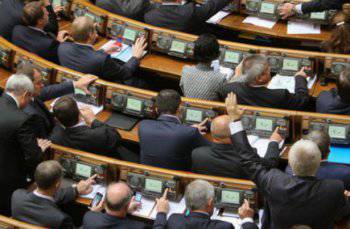 November 27 is to host the first meeting of the Verkhovna Rada of the new, eighth convocation, which will be of an organizational and transgender nature. Since the coalition agreement initialed the five most democratic and open for cooperation factions of the Verkhovna Rada, even before their creation, there is no longer any sense in the work of the new legislature in the traditional sense of the word.

It remains only to choose the speaker of the coalition, the prime minister of the coalition and approve the coalition government. Everything. The rest of the deputies, not members of the coalition, should come to terms with the role of rogue states, since many of them, almost all of them, voted for the dictatorial laws of January 16. This led to Maidan, Maidan overthrew the bloody regime, joined the EU, but then something went wrong, and as a result we are fighting with Russia for the bright ideals of European integration, which will begin no earlier than 2020 in the form of a virtual member in the future. Approximately this picture is obtained as a result. And where does transgender? This is the most important part of the coalition agreement, which for some reason was not reflected in the preamble. Look: the parliament has been updated, many new people have come, who have not fully decided on their orientation. The Rada must become a symbol of a new, purely European body; therefore, the outdated division of infrastructure facilities into “M” and “F” is hopelessly outdated. I remember that in one of the convocations of BP, one transgender creation (a real case) received accreditation, a man who felt like a woman and went to the toilet for women. The girls were very indignant and felt somehow uncomfortable. However, then, in the distant times of totalitarianism, the equality of all sexes, including intermediate, transsexual, was an abstract idea. In the office of BP, there were open homophobes who simply expelled a creature, a prototype of a real European, from parliament under a false pretext.

So that the situation does not repeat today, when EU membership is looming on the horizon, it is necessary to immediately open the toilet room for transgender people. This will allow to introduce high European standards already at the initial stage of the coalition Verkhovna Rada. The implementation of the transgender project is the most promising start-up of the new parliament. This will demonstrate the high level of innovativeness of the new composition of BP.

The next item of the coalition agreement, which for some reason did not find its public reflection, is the startup Mustafa Nayem, who presented it in the best tradition of Tim Cook and even, I’m not afraid of the word, now deceased Jobs. It is called simply and concisely - “Suck everything, or Why I will not work for one deputy salary”. As for me, this is one of the most promising projects in the spirit of the Internet. People are still doing absolutely nothing, but they are already sharply increasing their capitalization. He can now even score a bolt on everything, because he is revolting against rampant corruption and bribery. Agree, this business model is very, very promising. It is necessary to formalize it, because the idea of ​​Mustafa is warmly supported by many young deputies, especially from the organization of Lviv manual labor lovers. In order to indiscriminately not find fault with the innovative model of conducting parliamentary activity, one should carefully listen to the needs of national and sexual minorities.

Next, we have startups of extremely active field commanders who are forced to leave the trenches of the ATO and write laws that nobody needs in wartime conditions. In this market, a promising project to attract NATO to finance various trips to popularize ATO around the world is in the greatest demand.

Never before in the Verkhovna Rada were there so many heifers and field commanders at the same time. This phenomenon must be urgently detailed, described and recorded in a coalition agreement.

As we all perfectly understand, the parliament from the first days of its existence should give Ukrainians not only deputies for garbage lustration, but also inspire hope in transgender equality. Otherwise, there is a serious threat of destabilizing the situation on a large geopolitical board. For a short period of time, Ukraine is obliged not only to create a powerful military superpower with a transatlantic fleet and military bases around the world, but also completely eradicate homophobia, as well as contribute to the implementation of the most promising startups. The rest - default, the physical extinction of older people, racial genocide in the east of the country, murders of civilians, authoritarianism - these are not the primary tasks of the Maidan authorities.

After all, why do we all desperately need a referendum on the immediate entry into NATO? Yes, so that at least they could be accepted there and transgender people could be taken into the army to establish universal social justice. Today in Ukraine, if you are not an African American, a veteran of Maidan, a transsexual and a lesbian, you simply have no prospects for Euro-association and representation of your interests in the highest legislative body of power. This challenge is necessary to adequately accept. Inside.