Can the Russian army once again intervene in politics? 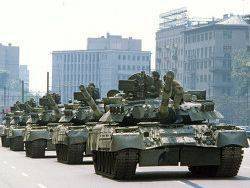 Our army in big politics was noted twice. In 1991, she turned away from the Emergency Committee and supported the White House. Not all, of course, but that part of the officers who took the side of the leadership of the then RSFSR was more resolute. As a result, Yeltsin won. In 1993, the army ignored calls for it from the rebellious White House and again sided with Yeltsin. He won again.


After that, the authorities resorted to the services of the army three more times, but no longer from the standpoint of the confrontation of internal political forces - in two Chechen campaigns and during the military conflict with Georgia in 2008. She rescued them again, although the Chechen campaigns were very difficult for her morally.

Now, in the days of the 20 anniversary of the so-called. “Putsch”, there was a reason to think about the possible role of the army in the future. Will she ever be able to influence policy? The question is not at all idle, if we recall the role of the army in the spring "color revolutions" in the Middle East. Should the army factor be taken into account by the current Russian authorities in their actions, or can it be ignored? Pavel Baev, a professor at the International Peace Research Institute in Oslo, tried to answer this question in an interview with BFM.ru.

According to the political scientist, the Russian army is no longer the same as in 1991 and even in 1993. Infinite cuts and confusion, scant funding, the authorities' dismissive attitude towards the officer corps and more than two years of military reform (after 2008), along with the actions of defense minister Serdyukov that caused general criticism and dissatisfaction. Among the officers, there is apathy and unwillingness to take responsibility for the fate of the country, which was not 20 years ago. Perhaps it was this state of the army that was the main task that was set before the professional furniture maker, appointing him to command the defense. But the soldiers are not furniture. It was only in the fairy tale about Urfin Dzyus that they were made of wood, sprinkled with magical powder, they drew a uniform on the body - and that was done, go ahead.

“In the USSR, the army had a completely different profile, it felt completely different, especially the officer corps,” recalls the expert. - There was more confidence that military force is the main thing. The USSR was primarily a military superpower, this idea was the basis of all state power and was transferred to the officer corps, which had a very developed sense of responsibility for the fate of the state. ”

But even then, in the last years of Soviet power, the collective psyche was “invincible and legendary,” as it was called in the songs, received the first significant injuries. “The Soviet army, especially the ground forces, was seriously injured, firstly, by the experience of the war in Afghanistan. Secondly, at the time of the State Emergency Committee, the collapse of the Warsaw Pact, the need for the withdrawal of troops, the surrender of the advanced line of defense, as it seemed then, became apparent, ”said Bayev.

The officers had a feeling that the country was losing and a catastrophe was happening. It seemed to them that there was no one else to act, there was complete confusion in politics, the leadership had lost its idea of ​​how to control the situation. “The readiness of the army to take responsibility for itself was very high,” the expert notes.

But from this readiness is now no trace. What has changed? “A lot has changed fundamentally,” says Baev, “especially the feeling of the army itself. In August, 1991 for the army was not about reacting to something, but about acting in the most active way. Now the army is not able to take any responsibility for the political development of the country. I do not think that there are sentiments in the officer corps, that the army has something to say or offer.

The army is extremely demoralized by reforms that have lasted since the fall of 2008. Officers are exhausted by all sorts of cleaning and shuffling. All sorts of promises in terms of armaments do not change this climate. ”

But, perhaps, has increased the loyalty of the army to power? After all, the officers who remained in the service significantly increased their salaries, give them apartments, announced new plans for rearmament, quite impressive sums were announced that they are going to spend on it. “Not in the least,” replies Baev. - Loyalty in the sense of trust in leadership and a willingness to defend it, perhaps, at a record low. There were periods, especially after the defeat in the first Chechen war, when the feeling that the army was betrayed was very strong. The same thing is happening now. The reforms are carried out with such disregard for the opinion of the military, all manifestations of discontent in the officer corps are so uprooted, the entire professional leadership of the officer corps is so swept out with a hot broom that it is impossible to expect any kind of loyalty from the army. ”

Will Serdyukov remain Secretary of Defense after the election of the 2012 of the year, or can he be considered to have fulfilled his task by bringing the army to the state in which it is now?

“It's hard to say,” replies Baev. - Reforms were initiated and promoted in one setting, planned completely in another. They were planned in the 2007 year, when it seemed that we had a calm voyage ahead. The reforms started not only after the war with Georgia, but also with the beginning of a very deep crisis. From the point of view of normal human logic, a worse moment was hard to pick up. According to my ideas, the situation has matured in order to declare him a scapegoat, and even before these elections, it’s likely to be removed somewhere out of sight in order to beat off a wave of discontent. ” Only in this way can the loyalty of the army be restored. This is especially necessary at the moment with an eye on Egypt and Syria. There may be a situation where the army will be the last support of the regime.

And from this perspective, it is useful to look at how the modern army treats President Medvedev and Prime Minister Putin. The expert believes that Putin, becoming the chairman of the government, prudently distanced himself from the problems of the army, focusing only on the issues of armaments. For this reason, it is not directed at the special dissatisfaction of the military environment. And the fact that it was he who appointed Minister Serdyukov is no longer remembered by everyone.

Medvedev, as Supreme Commander, did not succeed, although he tried first to highlight Serdyukov to the fore. But then he had to interfere himself. It bears the burden of responsibility for making final decisions. At one time he liked to appear in front of the lenses in the jacket with the badge of the commander-in-chief, but this did not bring him any special political dividends, but made him only one of the tricks of dissatisfaction of the military, whose votes he now can hardly count on.

But even with the support of the army, the expert believes, if it were, the president would not have decided on a real political confrontation with the prime minister. “Dmitry Anatolyevich is weak to go for a serious confrontation,” says Bayev. - He is trying to position himself as an exciting alternative. Here we need political will, determination, character, and behind him I don’t notice anything like that. ”

If a political analyst is right in his conclusions, then none of the members of the tandem also has to rely on active personal support from the army if such a need suddenly arises. Although the overall situation seems to be far from that.

We are in Yandex Zen
Damned august
14 comments
Information
Dear reader, to leave comments on the publication, you must to register.