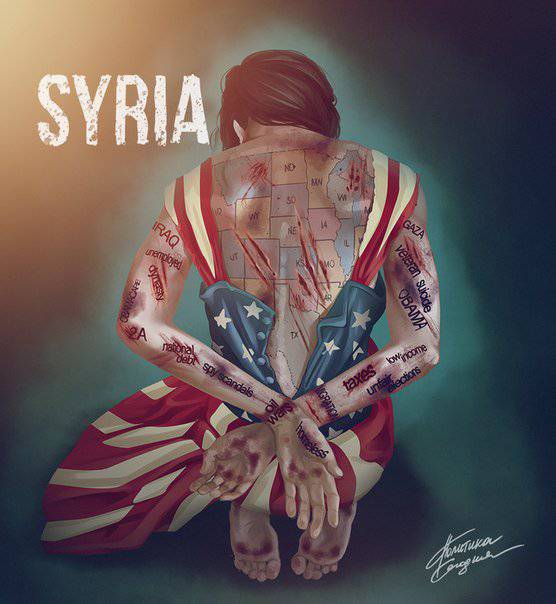 In Damascus, mortar shelling by terrorists continues. A shell that hit a residential building in the Duweil quarter resulted in three people being injured - young brother and sister and their mother. Another mortar shell landed in one of the apartments in the quarter of Al-Kassa, one person was wounded. There was a lot of material damage to the residents of the house. In the city of Harasta, near Damascus, a sniper terrorist wounded a woman. A few mortar shells also hit this city, resulting in significant damage.

Residents of the city of Yabrud, which was once under the rule of terrorists, but was liberated by the Syrian army, held a great celebration in honor of the fact that the city is returning to normal life. During the rally, signatures were collected under a huge 10-kilometer letter expressing gratitude to the army for its exploits in liberating the country. This letter also contains poems by Syrian poets dedicated to the struggle and stamina of the motherland. The culmination of the holiday was a collective youth wedding.

Syrian President Bashar Al-Assad met with UN Special Envoy, Italian diplomat Stephen de Mistura, who visited Damascus. Discussed, in particular, the issue of creating a "frozen zone" in Aleppo. That is, it was about a local truce, because, according to the UN special envoy, without peace in Aleppo, the struggle with the "Islamic state" is impossible. Earlier, Mistura met with Syrian Foreign Minister Walid Al-Muallem. The Italian diplomat also visited the city of Homs, where he familiarized himself with the practice of local reconciliation, which made it possible to liberate the areas of the Old City from terrorists.

At a meeting with Stefan de Mistura, Bashar Al-Asad said that his country was ready to render any assistance to the special envoy in his mission for the sake of the interests of the Syrians. The question of creating “frozen zones” and other peace initiatives in Aleppo needs to be studied in detail.

According to the Syrian president, the success of Mistura will be a success for the whole of Syria and its people. He stressed that the fight against terrorism is a priority goal today, and it is the successes in this direction that will contribute to the process of national reconciliation.

Meanwhile, it is possible that the Syrian army succeeded in destroying one of the most dangerous terrorist leaders - the field commander, who came from Chechnya named Omar Al-Shishani. This gangster with a red beard was filmed many times surrounded by thugs against the background of smoking ruins of Syrian cities. He was very fond of threatening further war not only with Syria, but also with Russia. On the destruction of Al-Shishani said the president of the Chechen Republic, Ramzan Kadyrov.

The name Omar Al-Shishani is associated, in particular, with numerous crimes against Syrian Christians, as well as Alawites in the provinces of Aleppo and Idlib, as well as Lattakia. These bloody atrocities were committed under the false flag of the “fight against the infidels.”

The State Duma of Russia intends to adopt a special statement regarding the situation of religious minorities in Syria, as well as in Iraq. The draft statement calls on the international community to do everything possible to stop the evil in the form of international terrorism, to cut off all sources of financing. The text of the document also states that antiterrorist efforts should be undertaken on the basis of international law and under the auspices of the UN. It was emphasized that the situation in the Middle East was the result of the policies of Western countries, which neglect international law and implement their own scenarios of interference in the internal affairs of sovereign countries.

Russia also intends to submit to the UN Security Council a draft resolution to protect religious minorities in the Middle East region, in particular, Christians. This was stated by Deputy Foreign Minister Mikhail Bogdanov.

Another representative of the Russian Foreign Ministry, Alexander Lukashevich, said at a briefing that without coordination with the Syrian government, the United States would not succeed in defeating terrorist groups. Lukashevich also condemned the meeting of the so-called "Friends of Syria", which was held in London on November 10, where the assistance of a certain "moderate opposition" was discussed - that is, in fact, it was also about supporting terrorists.